Sometimes watching the news can be a bit much. If it doesn’t bleed it doesn’t read. We choose what we want to think about. Sometimes I turn the volume way down and step away from the distant dreary drone of death and disaster in lieu of sinking deep into the cushy love affectionately offered by the couch waiting to embrace me.

When I choose to think about summertime, I think about beautiful women revealing their all, on beaches made for healing one’s soul. I think about feeling the sun toasting my skin as the cool breeze puffs me like a thick soft towel made from Poseidon’s breath.

That applause of clapping palm trees muffled by crashing tide, and the occasional soft gust whispers right in my ear. I close my eyes to better imagine the waves crashing in and out, in and out, and feel the hair on my arm dance with the damp wind.

A surfer dude sports a man bun atop his head as he walks the beach along his son the protegé. The dad turns away for a second to pick up some trash on the beach left by those less conscious of the beauty we’re all responsible for. The surfer stands back up to deliver a do-not-litter lesson to his son, and the small child is gone.

The frantic father looks all over the immediate area of the disappearance but the boy is nowhere in sight. Hysterically he retraces his steps trying to think where he went wrong or what could have happened. He steps out on the street and yells to a biker passing by, “… have you seen my son? he’s gone…”

The biker takes his hands off the handlebars and looks around, then yells back. “No man, I haven’t seen him but did you hear about the coup in Turkey?”

The frantic father runs through the streets calling for his son but no one turns, no one helps, no one hears his cries. He jumps into a museum for help, “… excuse me, but I have lost my son. He’s a small boy with a wet suit on just like the one I’m wearing. Have you seen him?…

The ladies at the reception area look at each other and then turn back to him, “… no we haven’t seen him but did you hear about the truck driver who was shooting as he plowed into a huge crowd in France and killed over 80 people!?”

Realizing the ladies were of no help, the desperate dad ran through the museum in case his son had wandered in. On the second floor he found some ladies looking out from a balcony. “… excuse me ladies… have you seen my son… I’ve lost him and I’m terribly worried…”

The ladies turned toward the fallen father and replied, “… no we haven’t seen your son, but did you hear that Donald Trump just chose a running mate, and he’s supposedly worse than Trump. Together, the two of them are going to repeal abortion and take away women’s choice over their own body!”

Then the three ladies just turned back toward the sky and continued their discussion about the Bravo show Million Dollar Listing of New York, and debated what the next step would be for Luis Ortiz, the cute latin realtor who decided to quit real estate for good.

The panic-stricken papa ran out of the museum distracted and delirious. Out in the street he saw a woman carrying a boy and the frenzied father yelled out to her as he ran past. “… excuse me ma’am have you seen my boy… I lost him at the beach… he looks just like me… he’s wearing a little wet suit…”

The woman replied ,“…I haven’t seen your son but you can have my little monster… I’m tired of taking him to the emergency room, I was just going to leave him behind a dumpster…I got to get rid of him… he makes my boyfriend drink too much, and beat him, and I need to keep my man happy so he keeps paying the rent…”

The frantic father ran away furious, determined to find his son…

Down the road a piece, the distraught dad came upon three men on bicycles. “Excuse me gents, I’ve lost my son and I’m going berserk trying to find him. Have you seen a little boy in a wet suit?”

The three men looked at the panic-stricken big man standing in the wetsuit, then turned back to the bicyclist in the middle who spoke, “… no man, we haven’t seen him, but did you hear about the cops that were shot by a sniper in Dallas? Five were killed and like 10 or 11 shot or injured…”

The surfer dude shook his head and looked down in despair, but continued his search…

Desperate, the father ran back to the beach thinking his son couldn’t have gone far without being noticed. The dad remembered talking to the boy about situations he may find himself in… and what to do if the boy was in those situations.

Beside himself and  in a fit of fury the surfer dude cruised up the beach searching tirelessly. He passed by a couple of people in a tent with their dogs and yelled out to them. “Excuse me… but have you seen my son? He’s a little surfer dude… looks just like me… and he wandered off… have you seen him?”

The dogs started barking as the surfer shouted his raving request. The woman in the tent yelled back over the barking dogs, “no man… we haven’t seen your kid… but did you hear about the massacre at the gay dance club in Orlando, Florida? Like over 50 people were killed! They’re saying it’s like the biggest mass murder in American History… right after the Wounded Knee Massacre, the shooting in Bath, Michigan, the massacre on the Virginia Tech Campus, Sandy Hook, and all those other atrocities where people went postal!”

In shock, the man thanked the woman and continued his search… 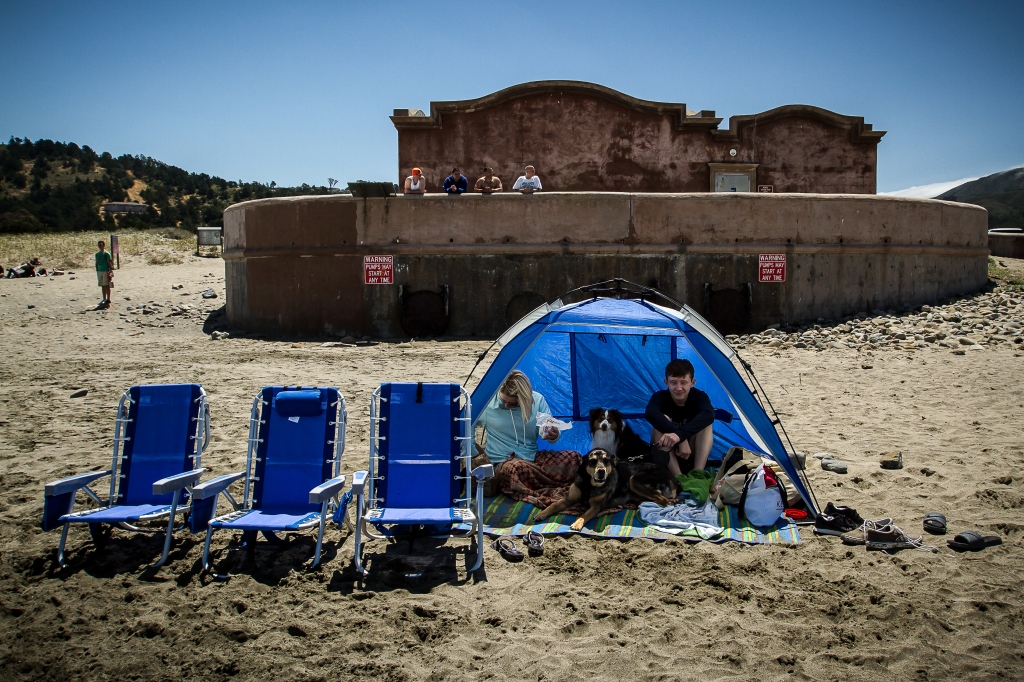 The surfer dude shuffled on the beach trying to remember what he told his son in the story. He thought he said something like, if you ever get lost on the beach, look for the man or woman sitting in the giant chair. Tell them you’re lost… and they’ll help you find your way back to me…

In the distance the surfer dude saw the giant chair where a life guard was standing waving both his arms over his head. The surfer dude started to run to the chair. On the way he passed other surfer dudes who were all alone, except for their boards.

Running to the big chair, the surfer dude passed a strange man standing on the beach. For a second he thought that he was a bad man, waiting for unsuspecting parents to take their eyes off their kid for just a half-second… and he would swoop in and steal those kids.

But the surfer dude quickly dismissed the villain, knowing in his gut that his boy was at the foot of the big chair waiting for him.

Sure enough he was there. “Dad, I did what you taught me… I lost you, I didn’t panic, I looked for the giant chair and waited for you there. Where have you been… I was waiting so long…?”

The surfer dude picked up his little man and told him of his adventures while looking for him. He told the boy that no matter what horrible thing was going on in the world, nothing was more important to him than finding his son and he swore he’d never lose him again.

Just then a crack of thunder woke me up. I squeezed the sleep out of my eyes and realized I had fallen asleep on the couch with the news running on TV in the background.

Sometimes watching the news can be a bit much. If it doesn’t bleed it doesn’t read. We choose what we want to think about. Sometimes I turn the volume way down and step away from the distant dreary drone of death and disaster in lieu of sinking deep into the cushy love affectionately offered by the couch waiting to embrace me.