Long ago, in a place far, far away, I lived in an urban tenement building basement, gotten to through a little Hobbit-like doorway under the stairs. The only window was in front, allowing people to look in as they passed, and from my angle, all I could see were people’s legs as they walked by. I kept the curtain drawn at all times rationalizing privacy but deep down thinking solitude, and of my escape to a better place.

Unable to afford cable, I owned a cheap TV with an even cheaper DVD player, and would just watch movie after movie. Each night before I’d go to bed, I’d put the same movie in the DVD player and listen to it as I would drift off to sleep. Aboard my tiny twin mattress actually made of springs, in a tiny dank bedroom, tucked in the back of a dark basement apartment, beneath a crumbling tenement, I’d watch this DVD with my eyes closed, every night before bed for almost 2 years.

The movie was Cast Away with Tom Hanks. I heard a rumor that it took the writer 5 years to write it perfectly, with over 250 rewrites. Though the entire movie was filled with great life-lesson metaphors, my favorite part was the incessant crashing of the waves on the shore of his tiny island. Each night, Tom Hanks would look out on the water, wondering when he would be rescued from the solitude of his tragic paradise.

Years later, I find myself on any number of pristine beaches, often sitting there, looking out on the same scene that sent me to dreamland every night, so many years ago. The difference in my scene from the one Tom Hanks endured in that movie, is that every once in a while, unexpected odd visitors would stroll across my view.

This past weekend, no DVD was necessary to transport me to that peaceful place, as I was there, perched on a lounge chair with my camera aboard my belly. Each time someone would walk by, I’d quickly raise the camera and capture their image and wonder where they came from and where they were going.

I wondered about the matrix of coincidence and what brought them to the same spot I was in, at the same time I was in it.

A father and daughter stroll across my view. I thought of how this little girl holding her daddy’s hand was learning about security, safety and protection. I wondered how this will define their relationship, and as the two would grow old how he would spend his whole life being her protector.

Then I thought about the day in their future when the tides would turn, as a little girl grows into a mature woman, she would be walking along her now needy senior father, holding his hand, in order to give him the same feeling he had given her when she was young and defenseless.

I wondered if she would be angry and resentful that his natural aging and inability to protect her, now made her vulnerable, or would she find the compassion to protect him as he protected her all those years.

Soon, another couple arrived from the other direction, also holding hands. In matching tropical reds, they marched in unison. They first met long ago, in a Sporting Goods Store somewhere in Ohio. Both standing near a tall rotating rack of books about rock climbing, they caught each other’s eye.

Thirty years later, they decided to have a reunion and planned to meet at this beach. Now, after decades apart,  together again, they can do what they always longed to do but were unable. A small thing to most, but to them the most unattainable joy, a simple stroll while holding hands.

Other less romantic bottle carrying couples also crossed before me…

After a while, two ladies walked across from the other direction.

The tall one, a successful Real Estate investor, turned her lack of romantic opportunity into hard work and a disciplined plan toward her future financial independence. For years and years, she rented out rooms in her house, bought new houses, repaired them and rented those out, and continued to collect homes till her assets and their respective tenants could support her lifestyle without working for others.

Now wealthy and retired, she vacations by cruise all around the world, and invites friends of various ages to keep her company as she explores distant shores. 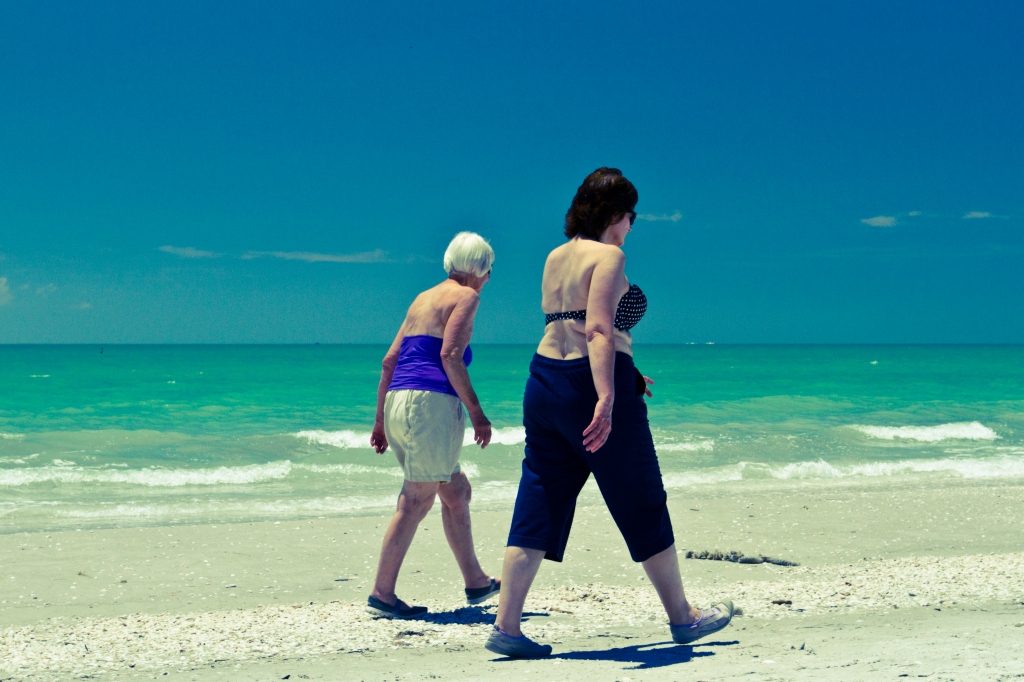 I drifted off listening to crashing waves, similar to how I used to in the basement apartment. The sun had moved and began to cook the part of my shoulder peeking out from under my umbrella’s shade. As I opened my eyes and moved out of the burning light, I woke to find two ladies standing in front of me staring out at the water.

This was the beach that they and a group of their friends would often visit, party and give in to their hippie bohemian mood. For years the gang of ladies would gather and gab about husbands, boyfriends, children, politics and sex. Then, one day, one of them was diagnosed with Pancreatic Cancer. About four months later she died on a Tuesday.

The funeral was held near that same beach where those once tight young nymphs used to gather and gossip. After the funeral, still clad in black, two of the ladies decided to return to their spot where so much joy was had by them over the years.

These two ladies from the surviving gang of women, stood quietly, looking out, remembering the best parts about their dear departed friend.

Moments later, a woman strolled across my view, who continues to try to achieve perfection in her appearance, even though she is well into her 70s. She still habitually eats a shake for breakfast, a handful of broccoli dipped into a thimble of dressing for lunch… not more than a few almonds as an afternoon snack… and some vegetables for dinner.

On Tuesday and Thursday, she works her arms and legs at the gym, abs every day… and shoulders and back on Wednesday and Friday. She has always had many admirers, even at her age now, but all this has merely been an apparatus to become strong enough to fight off unwanted attention, hide her fear of loneliness, and demonstrate an extreme need to control her world.

To me, regardless of the reasons for her life ritual, I thought her leathery bronze skin looked marvelous within her pink bikini, against the green gulf water backdrop, beneath the aqua sky.

Next came a slender couple sashaying across the beach like they owned it. They had come from the tennis court and decided to cool down with a stroll on the beach. Everything about them pranced with happiness as they walked in lock-step and just looked cool. Thoughtful and athletic they just kept on walking forward, letting go of their past behind them.

Lastly, came the shellers. Stopping, bending, examining, comparing… each looking for the perfect shell. One that is untouched, with the perfect color, the perfect shape and is completely different from the millions of other shells on the beach. 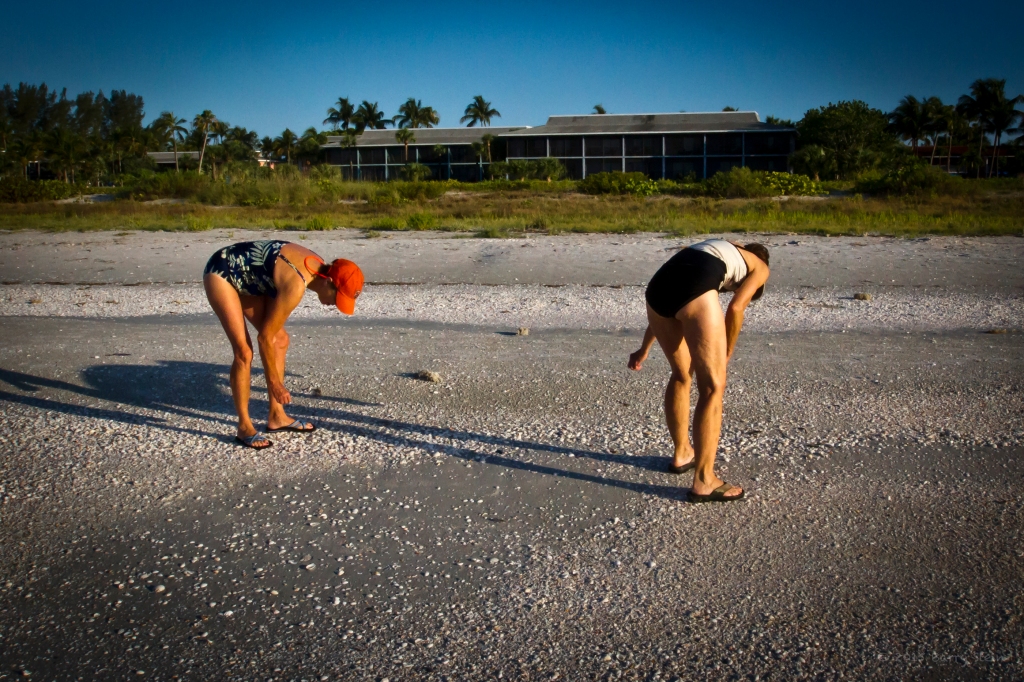 I asked a few people what going to the beach meant to them and remarkably they eventually came around to repeat the same phrase, “… it’s just the place that makes me happy…”.

These days, I don’t think much about the time I had spent years ago in the basement of my Hobbit home. I’ve let it all go to make room to appreciate my now. What was once an image on a TV screen that put me to bed each night, is now the dream of my daily reality.

Where do you go to get your happy?

2 thoughts on “PINCH ME”