I wander around with my camera and wish I was in Manhattan or Chicago where gritty drama is found with every step. Block after block one walks deeper and deeper into a dream of one’s own existence. Seeing people who resemble other people and places that remind them of other times.

While I wonder how I’m going to find anything of substance to shoot, I just keep tapping the shutter. Thinking about catching as much as I can in a scene but not needing to catch it all in focus. I think about getting the important things in the light but know this is often out of my control. I just point it and press the button.

Bigger hole, smaller hole, faster shutter, slower shutter, more noise less noise… I just press the button. I know that every time I’m looking at one thing, there’s a dozen things I miss. So I walk and shoot and expect nothing, think nothing and suck up life into my lens with every step I take.

A family of three walks down an affluent downtown Sarasota street and the little boy with them sees a piano on the sidewalk and runs over to it as if he can play. On that same affluent street, a begging man puts down his hat filled with cash and forgets he is working hard to solicit. He takes a moment to show the little boy how to play. 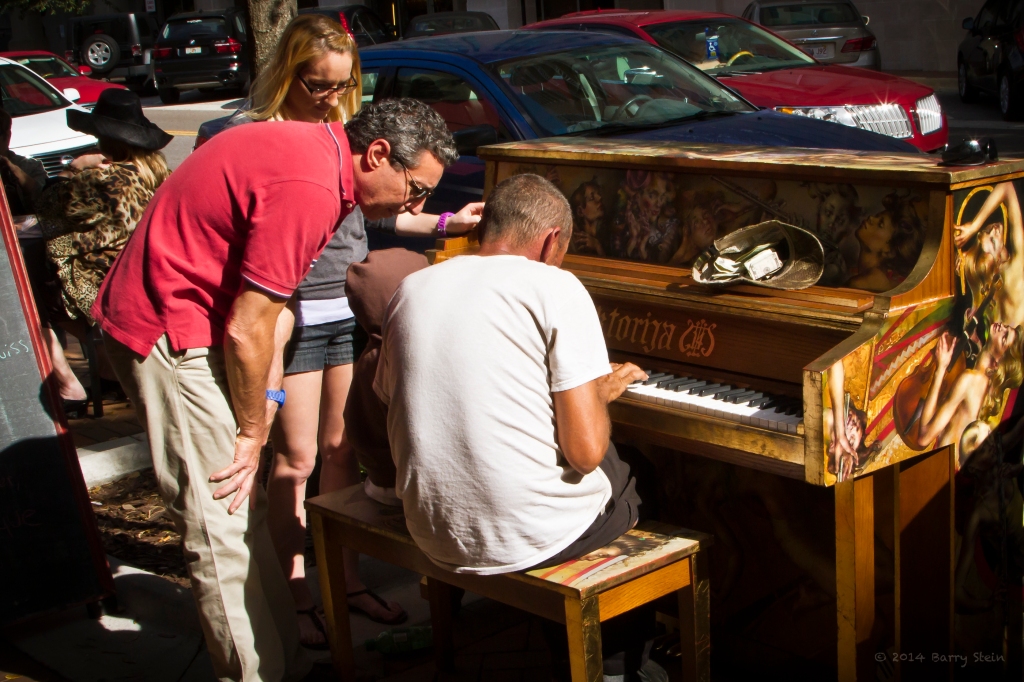 A few blocks away I sneak up behind a woman at a crafts booth trying to take a picture of her tent full of wares. Out of the corner of her eye, she sees me aiming at her from behind. She hits her tablet and reverses the camera’s view on herself. She tilts it slightly to include me behind her.

In that moment we both created art. She with me in hers and I with her in mine. Together we created a picture that goes on for infinity. A moment ago she had no knowledge of me and I had none of her and now we are combined in each other’s art for ever. 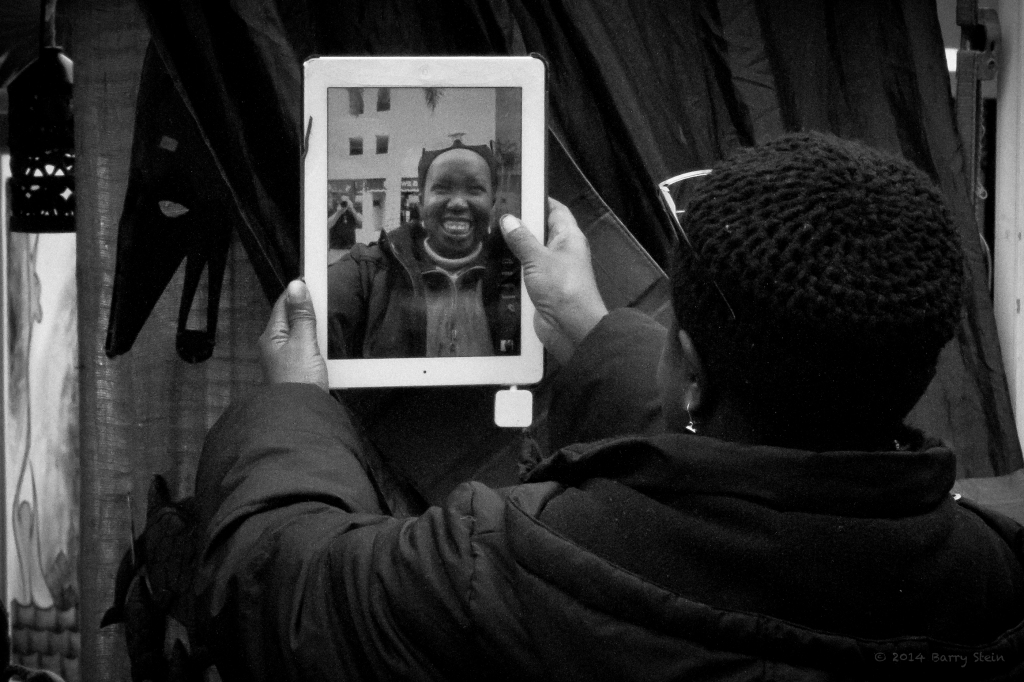 On another day, I walk through a boring park filled with beautiful people living picture perfect lives. A handsome man appreciates his young girlfriend on a bench as I pass. I raise my weapon as if to ask permission and they nod to grant it. A split second of old teenage memories during skinnier times with unsuspecting nymphs flood my now.

They shout out at me and request that I email them a copy and I say “will do”. I kept walking and they never stopped me as a moment preserved of them I had, and in 60 years they might wish they had. I turned and walked up to them and offered them my card suggesting that I might forget their email that they never gave me, but they can always email me for copy.

A couple of days later, the man, Christian was his name, emailed me and requested that I send him a copy, so that he could frame it as a gift for his girlfriend that Valentines Day. Happy to be his cupid I sent him the shot. For me seeing his hand interlaced with her’s across her chest, was all the compensation I needed.

I kept walking and found some rusty metal sparkling at me from under the water. Then an old Banyan tree echoed out at me to shoot its roots. 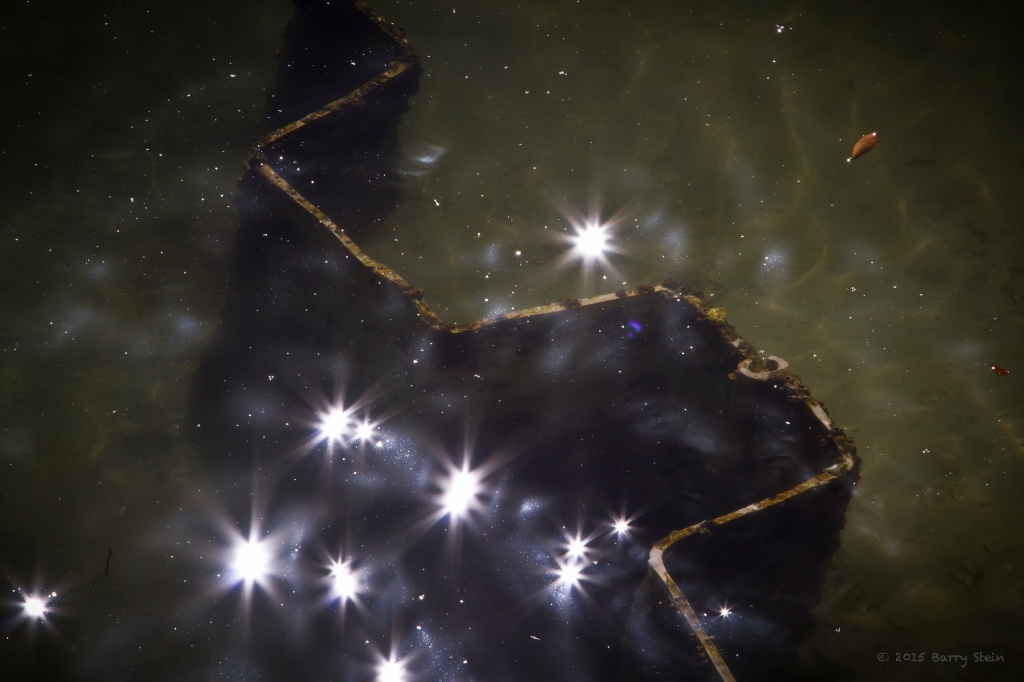 A group of people on a Segue tour take a break under a tree behind a tent. To me it looked like they just dropped out of the tree and were going to go for a roll leaving their hanging cords behind, dangling down from the branch. 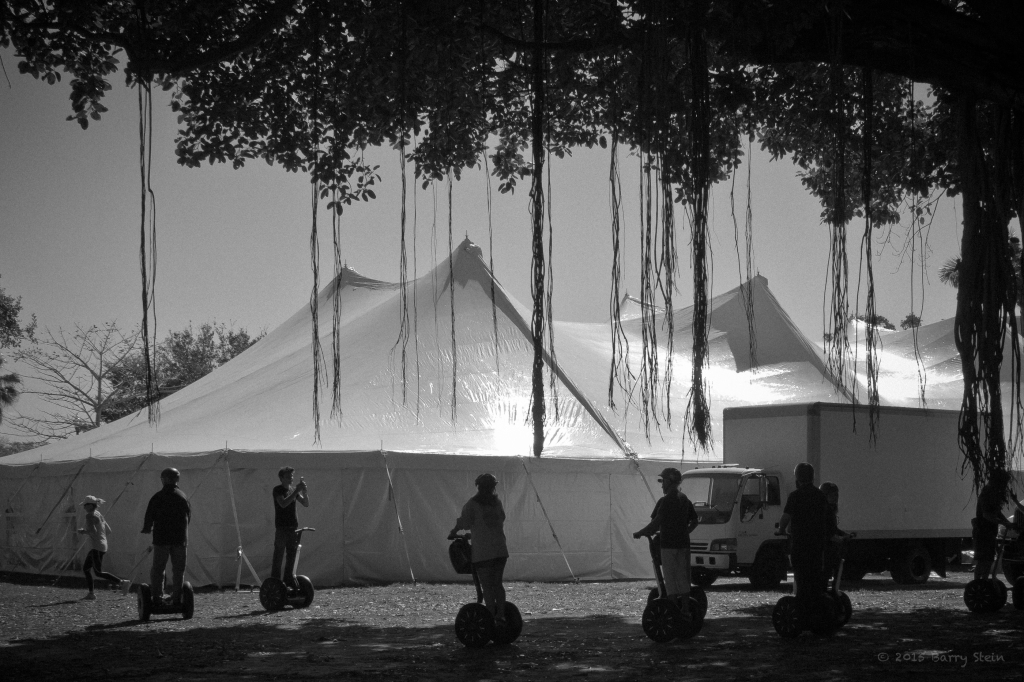 Meantime at another end of the park a woman looks out at the infamous St. Petersburg upside down pyramid. She sees not the blight on the boardwalk but rather is taken by the beauty of the water and the extraordinary day that she is gifted with. She reflects upon the abundance in her life and her fortunate philosophy to always go forward no matter what.

On another day a young woman sits at a restaurant with her dog at her side. She can’t imagine ever going anywhere without him. She joins her friends for brunch and Mimosas and secretly wishes she could be home on her couch under a blanket watching old Sopranos episodes.

She’s a bit lost without Sons Of Anarchy and Breaking Bad… and was disappointed with the 50 Shades of Grey movie that was too distant from the buzz she got from the book. She checks her phone to see if anyone surprising texted her and ends up ordering another Mimosa.

Down the street a festival rages. Hot Italians missing the Feast of San Gennaro decide to have their own.  A single mom gets dragged to the feast by her obese dad. She is a nutritionist who has devoted her life to revealing the poisons consumed by us without our knowledge.

All around the festival people eat, drink and talk about Little Italy in NY and how this is nothing compared to that. Italian bikers nod to hot cops guarding rest rooms. Young girls stretch out on docks collecting birthday wishes by text, ready to despise the friend who forgets.

As youth is wasted on the young, old street musicians wish they could be young again, and toot their horn for money hoping no one will notice their inability to play. 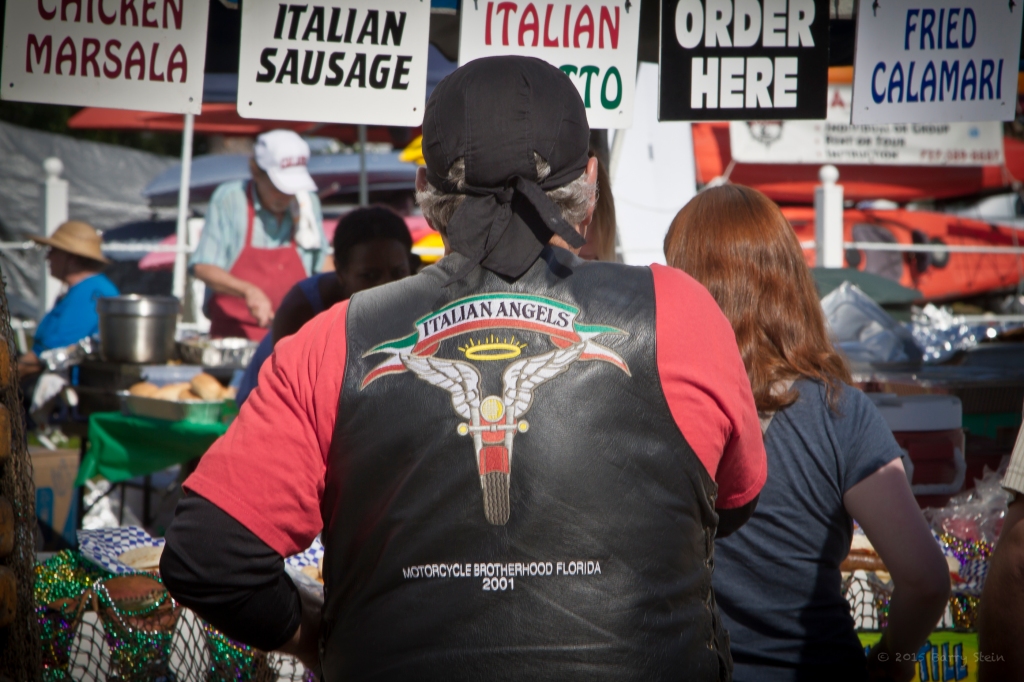 On the other side of town a jiggly drunk rocket scientist leaves a liquor store as she prepares to board a vessel with the hopes of seeing a Dolphin or two. At her side is her odd-looking nerdy husband wearing crooked dark shades, also drunk and together they would set sail shortly on a sunset cruise.

Her hair is thick and straw-like and her boobs are mashed in place, and lop-sided in her too-tight blouse. They’ve left their 6 kids behind, for a weekend get-away and are completely unable to not complain about every little thing. A smiling pirate’s parrot wishes them a safe voyage.

At the same time another couple in a fancy sports car pulls up along the drunk complainers. They unfold themselves out of the fast low vehicle and prepare for the two-hour tour. The woman unaware of her destination. The man surprising her, makes up for his inadequate Valentines Day effort the week before and has surprised her with her dream of floating on the gulf while the sun sets. 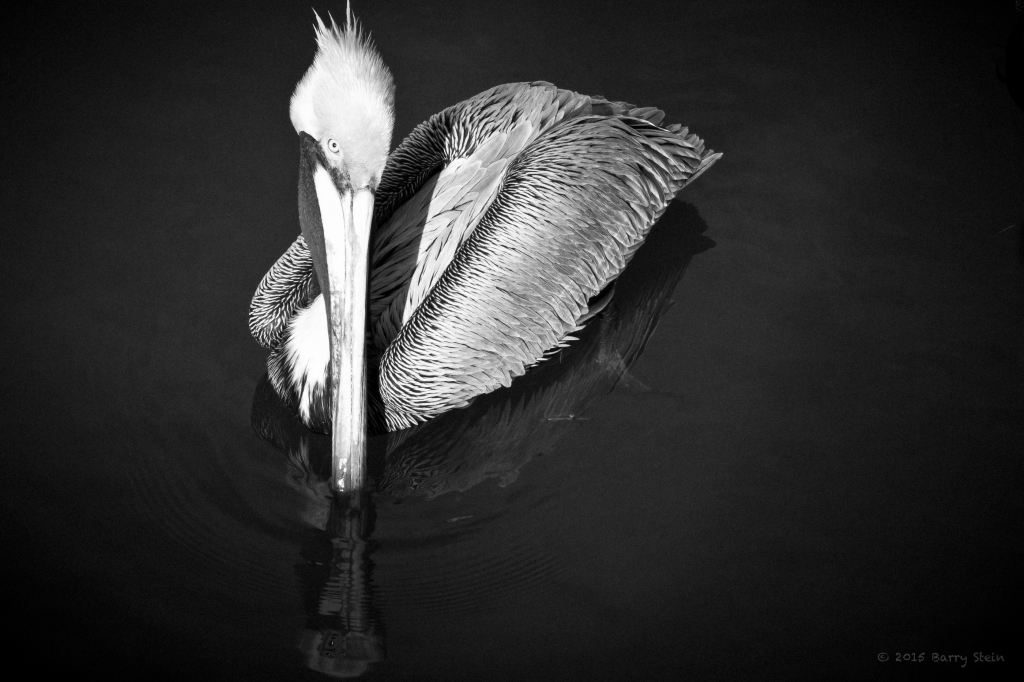 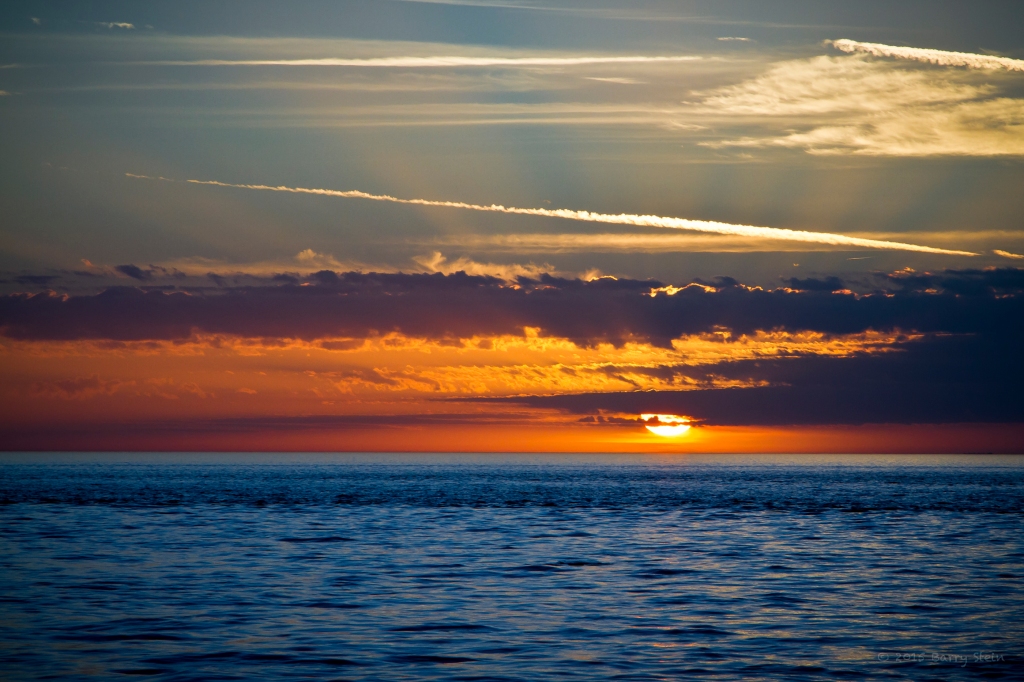 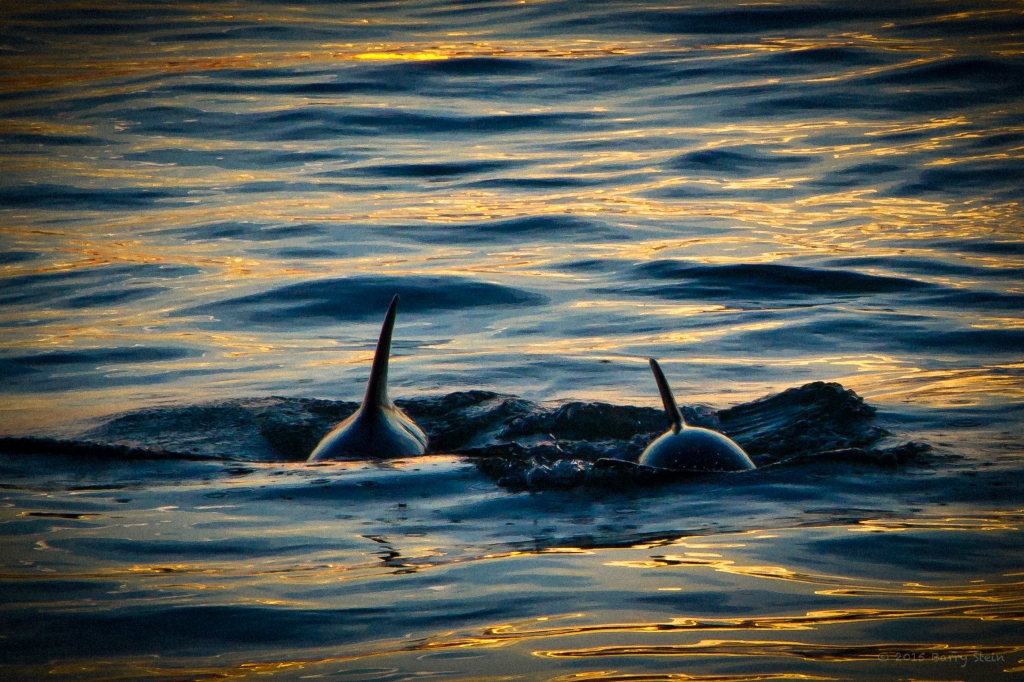