Wouldn’t it be something if we could all be hosed off at the end of the day and made fresh and clean from whatever dirt that might have gotten stuck to us on that day. This weekend my creative view was painfully skewed from pieces and parts of dramatic stories collected and overheard, making muddy my perception.

It all started out on our way over to a small public market that was held at a well-known brewery somewhere in a less desirable section of Tampa. On the walk over, there was a pile of tires stacked against a wall. All I could see was a braided pony tail off a woman’s head and wondered how they stacked those trashy tires so perfectly to make something I’m so fond of. There must be a lot of retired people living in this neighborhood I thought to myself without sharing the pun. 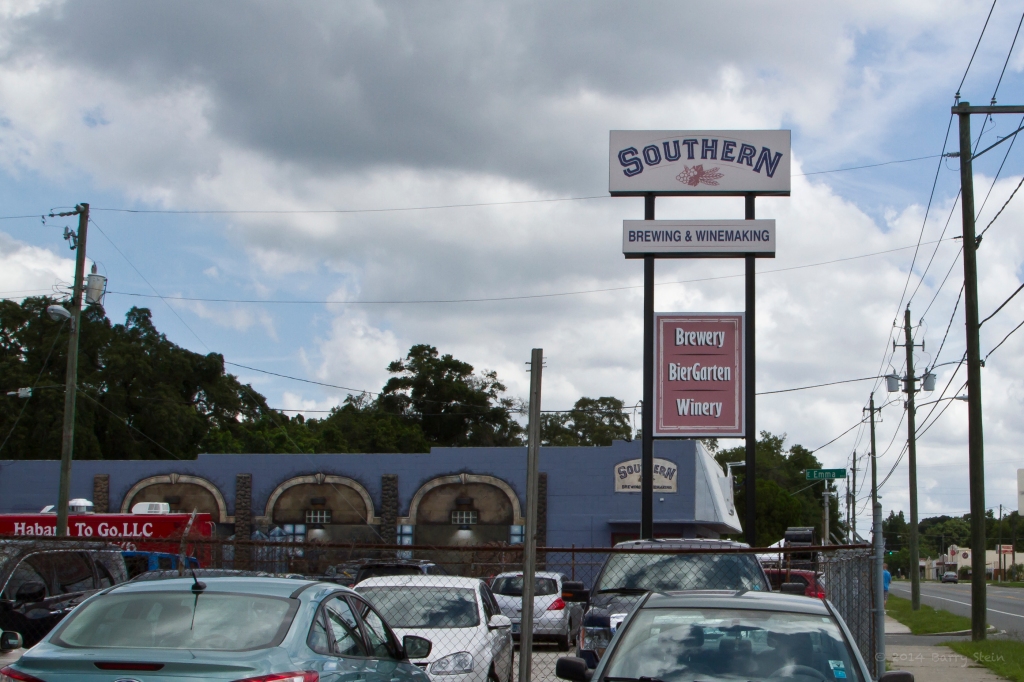 Outside the brewery destination, a woman stood staring at ring of barrels. She was filled with fear and worry, thinking thoughts no one could know. Within the next week she will be evicted from her home and she had nowhere to live. Her health was so poor that she could barely stand upright and her children lived far away by choice so there was very little support from them. Divorced, physically ill, unemployed and unwanted by most people, she stood staring at the ring of barrels and wondered how they all held together.

She would wander into the market to enjoy being anonymous and surrounded by other people. Her illness would force her to become so ill that she would end up at a local hospital barely catching her disease before her legs would have to be amputated. Her hospital stay would end up making her thinner, healthier and able to hold it together in order to go forward.

Inside the market a bearded man with a pony tail buys some free-range chicken while his dog has something to say to the one passing by. No one would know that this dog does not belong to the man as he is  just watching his son’s dog, who was just adopted from a local shelter. Together they were on their way to a barbecue at his son’s house when the dog would return home.

No one would know that this  man’s son is living with a woman who has also adopted two girls and baby from parents that didn’t want them. Together the son and woman would work, committed to each other  in order to make a stable and safe home for the children and pets. No one would know this son almost died of heroin addiction had he not become the defender and family provider he now is.

Nor would anyone know that the generous woman he moved in with is a successful phone sex operator, especially given her conservative, compassionate, giving and caring way with children, animals and her recovering man.

Inside the brewery a couple has a beer. He is a well-known editor of Hollywood movies, who has a secret passion for large fluffy women. The woman he’s living with is watching her daughter’s baby for the weekend. He loves to drink craft beer, get a little relaxed and stare at her enormous fleshy arms which he loves to knead like fresh pizza dough. He loves her to death and can’t wait to have her all to himself again after the baby goes back.

An aunt is out for the day with her niece. The little girl has special needs due to unexpected troubles when she was delivered at birth. Despite the child’s slow behaviors the aunt couldn’t possibly love her more. Together they eat the foods and do the things that the girl’s mommy does not normally permit, like devouring greasy cheese drenched chips and painting her face with crazy butterfly make-up on her eyes.

Meanwhile, the woman at the other end of the table looks across the room, over at man she wishes was her’s. She’s trying to not be noticed, staring and wondering what the beautiful man see’s in the trashy woman he’s with.

Filled with the voices of private battles, we left the brewery to visit downtown St. Petersburg for a change of scene.

A street person rests his bare feet just above water while shading himself under a tree. He holds a cell phone he found in the grass behind him and wonders what he’ll do with it. He thinks about his usual weekend routine of approaching tourists in the street and asking for spare change. He wonders if he is happy being free from possessions and responsibility or if he should feel guilty for preying on the generosity of others.

He thinks about it for another second and then forgets everything and anything he was thinking about because a bird flew by and it took all his attention. He puts the phone down and leaves it where he was sitting and follows the bird around the grass to his next random thought.

From another bird’s-eye view, way in the distance are heard whistles blowing, screaming crowds and applause coming from what looks like a tiny blow up slide off to the left of the infamous inverted pyramid at the St. Petersburg pier.  Apparently the Mud Wars were happening on this day.

Next to the donut duel and in front of the big blow up slide, was the tug-o-war. If doggies could have faces while playing tuggie… this might be what they’d look like.

And after the war was over… laying in the cool creamy mud couldn’t feel more refreshing or shiny. 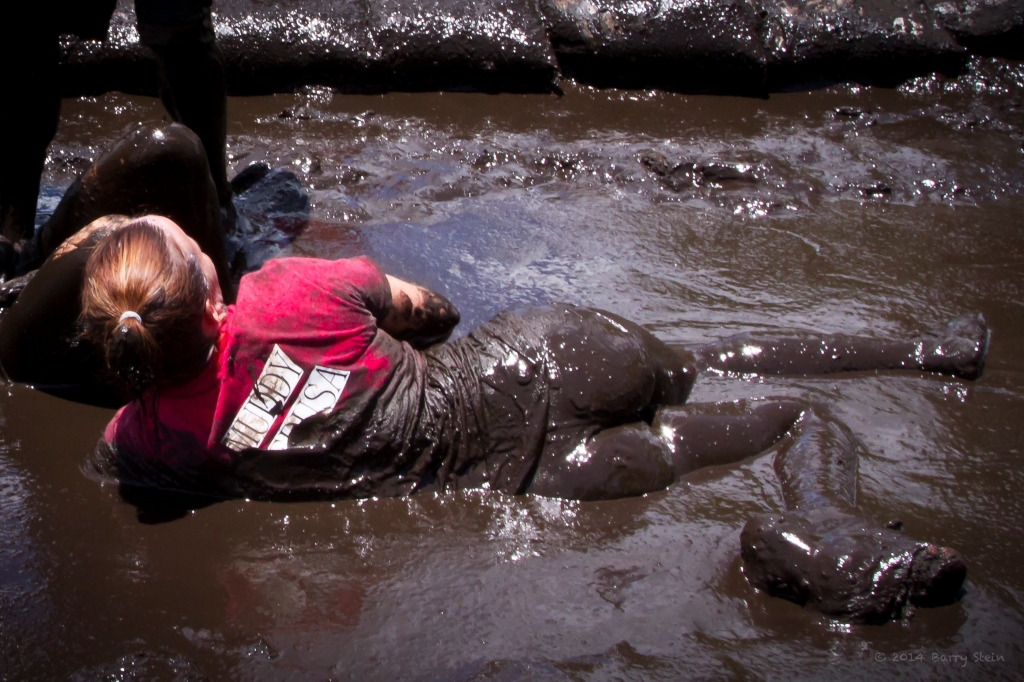 The only thing more refreshing than laying in the mud would be getting hosed off afterwards. And then I remembered  how I started this story thinking how great it would be to wash off one’s dirty drama at the end of each day. 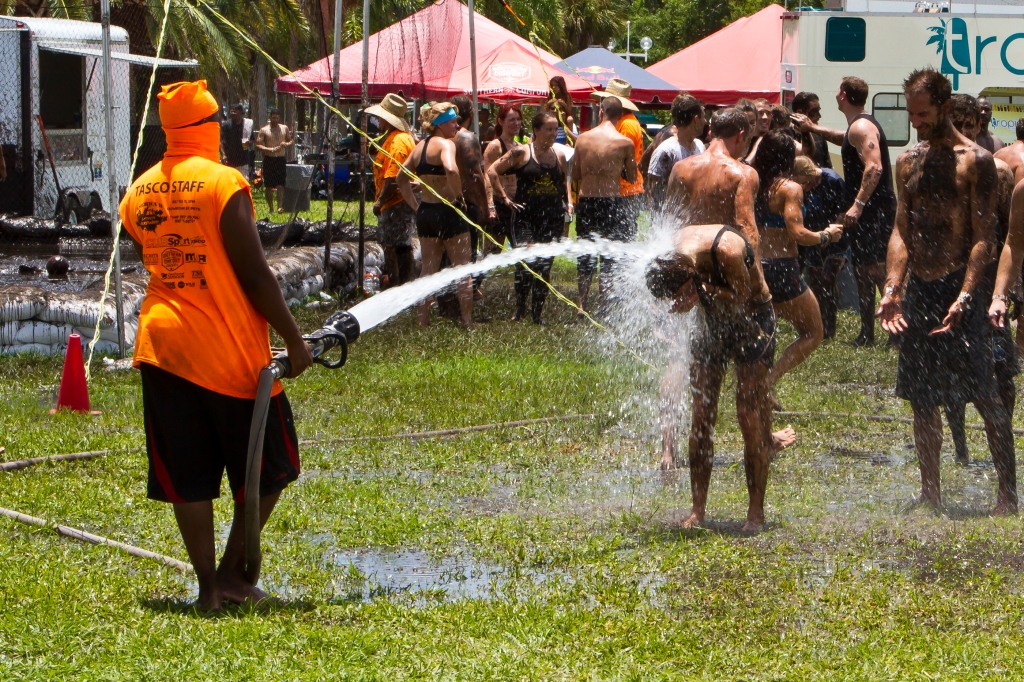 Epilogue: After posting this blog, I learned of this awesome video by the Cleveland Clinic that really sums up the experience of being sensitive to the private battles that others are fighting in their own world, that none of us are aware of.

Wouldn’t it be something if we could wash off the woes of others and make them healthy and clean again, like hosing off so much mud.