Sometimes I think I’m more dog than human. I see a dog and know how to behave… almost with greater insight than with my fellow humans. I’ve shared time with many dogs over the years. I suppose we’re all good at something and this weekend I was reminded that I too have unique knowledge.

There was the oversized Yorkie with the underbite that always ran away. There was the Beagle I snuck into my dorm room who wouldn’t stop barking…ever. There was the white shaggy genius with a Bachelor’s Degree in Fine Arts who attended the Maryland Institute of Art, who had a fatal chase with a squirrel across the street. There was the white German Shepherd with very bad destructive separation anxiety who eventually developed mange.

There was the half-husky half-golden retriever who was immaculate and kind of crazy. There was the dwarf German Shepherd who could climb ladders; we told the neighbor kids (in order to impress them with her potential size)… that she was only six months old; we did this for eight long years. There was the next white shaggy dog who slept like a rug in the center of rooms filled with people.

Then there was the salivating and genital drippy zaftig red Doberman who loved to chase running little children around the neighborhood and bite their butts, followed by the Peek-a-poo who was mentally handicapped. He would fall asleep from being scratched and rubbed, while resting on people’s’ laps and in his little Peek-a-poo dreams would release warm pee on those unsuspecting people’s laps. And of course there was his brave strutting brother by adoption, the puffy Pomeranian, who broke out into seizures on occasion.

I’ve shared time with a brilliant and commanding Jack Russell Terrier who liked to sun himself in the pool on blow up floats… and a goofy pigeon-toed Border Collie whose sense of smell was so acute, he could find his ball hidden on the tops of tall fences in pitch blackness. And most recently am sharing time with yet another shaggy white dog who demands California Protein Toast spread with organic peanut butter each morning, and waffles with honey and cinnamon on the weekend.

This past weekend there was a little AKC dog show in Tampa, and hiding behind it was something called Repticon which presented a completely different kind of pet for a completely different kind of person, to share time with. I often wondered why bible writers placed a talking fruit favoring snake in the Garden of Eden when they could have just as easily written in something about a dog. 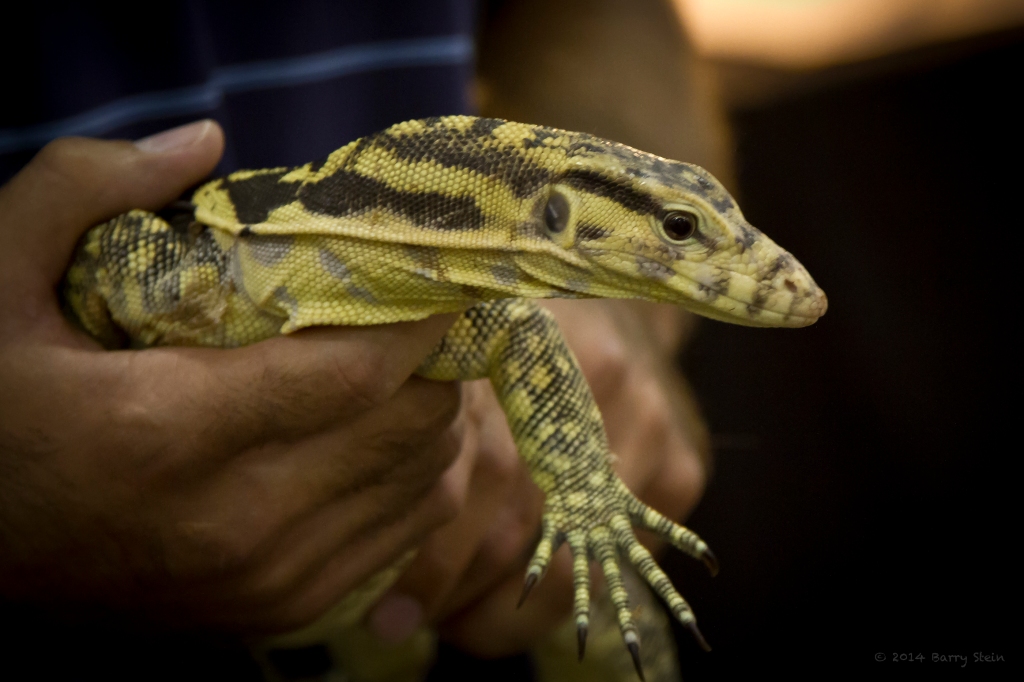 We had our fill of scales, creepy crawly spiders, demonic temptress dressed in tight snake-skin pants, cultish taxidermist selling authentic expensive wallets, tattooed and pierced heavy metal rockers and eccentric foreign students who compulsively rescue homeless lizards. All around us were slithering things trying to push the tops of their cages open and rather than waiting around for one of them to escape and cause mass hysteria… we went around the corner for something more warm-blooded and cuddly.

We walked past this Golden Retriever and he actually smiled and posed. I didn’t take the shot right away as I couldn’t believe how big he smiled and how his cheeks puffed out as he pulled back his huge grin.

Memories of my devoted Doberman got sparked when I saw this concentrated stare between two beings sharing time together. 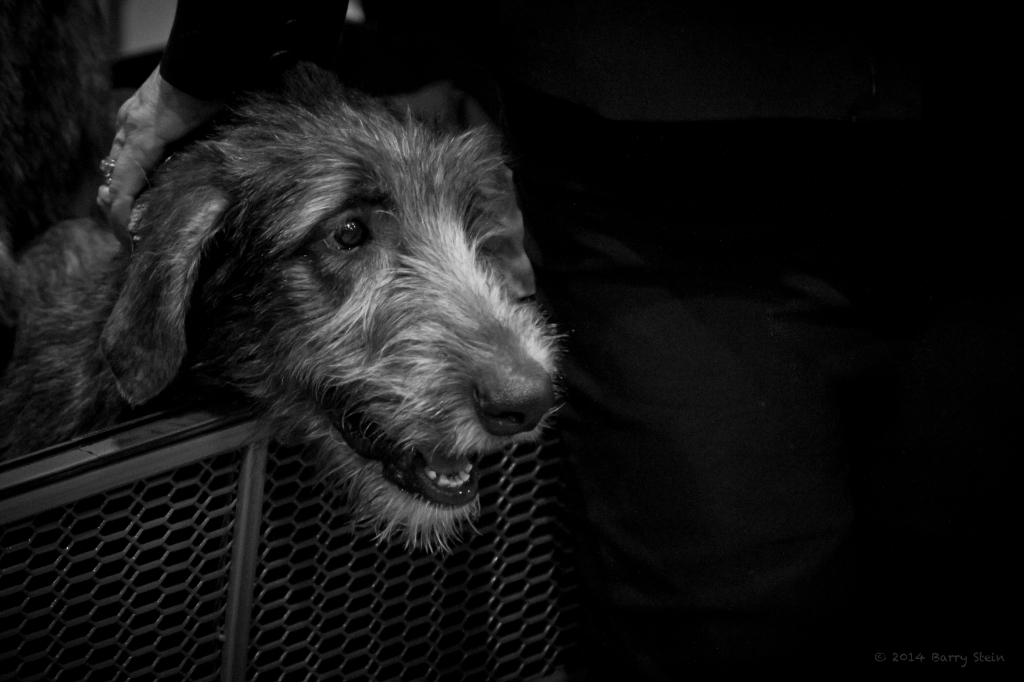 And memories of my old Yorkie got stirred as I looked at this pretty little Yorkshire Terrier with the red bow.

Do you know, when I was little and forming my level of confidence for life, I used to walk my Yorkie all the time and inevitably step in that dog’s poop… or maybe he just liked to poop around other dogs poop and no matter how hard I tried I’d always step in it. For the next three decades I considered myself one of the most unlucky people on the planet because I thought if there was poop around I’d be the one to step in it.

Back then when I’d step in it… I’d try to clean it out or off with a stick but could never clean it well enough nor get the smell out and because of my unsuccessful attempt at cleaning off the poop, I’d eventually end up throwing them away. Dozens of pairs of shoes with shit on them needlessly tossed along with whatever self-confidence I had back then.

It wasn’t till I was 45 years old when I learned that poop was water-soluble and could easily be washed away with water. All those years haunted by treacherous poop stepping potential when there was always an easy solution at mine and my dogs disposal, able to set things right and make things clean again. When you share time with dogs you become an expert on poop. 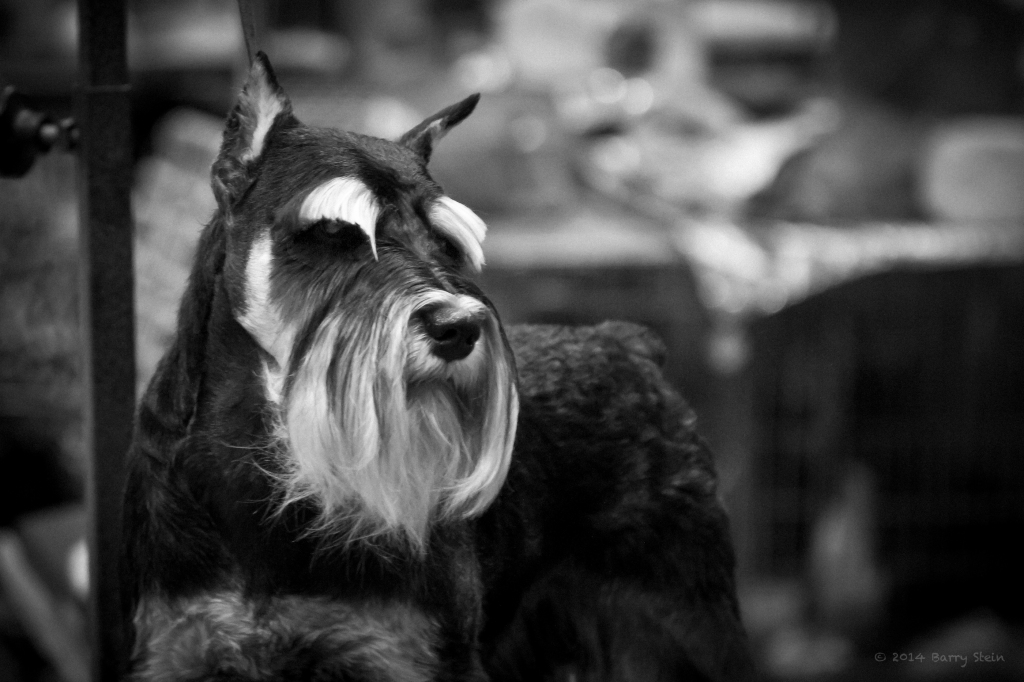 2 thoughts on “PYTHONS PUPS AND POOP”