One evening I was dying for Mexican food and found my way to the nearest enchilada and margarita. Mysteriously compelled to leave after dining,  I went for a drive to digest it all. For lack of a better direction, I went in search of  a little known but highly acclaimed Chinese Restaurant which was rumored to be up the street from that humble Mexican joint. Based on fragments in my mind of memories collected,  from what others had told me, I headed in a direction I had never been in, only to find myself unexpectedly at place I had never been before.

A road seemingly leading to nowhere opened onto a high school football field where crowds of people not known to me, gathered to show support to those connected to a terrible disease. On a clear night after dinner and just before the sun set, I visited with those participating in the “Relay for Life” who cancer had touched.

Over the years I’ve lost many friends, family members and beloved pets to this terrible tragic disease that seems to arrive without warning. There was once a dear woman I worked with, who used to visit with me each morning and over coffee tell me the tales of her online dating encounters that occurred the night before. Shortly after a routine annual exam and a few follow-up visits, she was told she had brain cancer and would need to get her affairs in order.

In another episode, I took my dog in for a routine dental visit where they noticed a tiny bump on his cheek. Some tests were performed and this rug of a dog who had become more like a brother to me, apparently had an aggressive tumor under his eye. After 10 years of sharing space with this humane society rescue, and three months after his diagnosis, one evening I came home after work and found him hemorrhaging on my kitchen floor. That night he was put to sleep and was gone from me forever.

I once had an uncle that no one understood, who regardless, was adored and idolized by every member of the family. I was the only one who got him and he knew it. When we were little he would take us on odd walks to the convenience store for milk but would call the hike “a snake and donut hunt” just to make it more interesting. Or he would bully us all as little children, into sitting still at the kitchen table, so he could serve us breakfast, or in the evening after a Scotch, he would open up like a virtuoso and shock us with astounding piano performances or just pick up the phone at random and call, when one of us was feeling impossibly low and magically cheer us up with ridiculous humor.

He went through wives like you or I would go through a pint of Ben and Jerry’s ice cream to feel better from some dose of life’s evil… and after his fourth wife he finally found true love with his fifth. A year later he was diagnosed with pancreatic cancer and he soon started to wither away, till he refused to see any of his devoted family. I of course showed up unannounced at his door step, on a Sunday morning  in complete defiance of his wishes. Despite his typically threatening boundary assertions, I appeared before him and was the last of us to see him alive.

If I dug deep enough, I could write at least another dozen stories of people I’ve known, that I never wanted to lose, who I too lost to cancer. On this night I randomly discovered these poor victims of loss completely by accident and grabbed a few shots as I walked the track with them. Some had the disease, some knew someone who had the disease and others had lost someone to the disease. 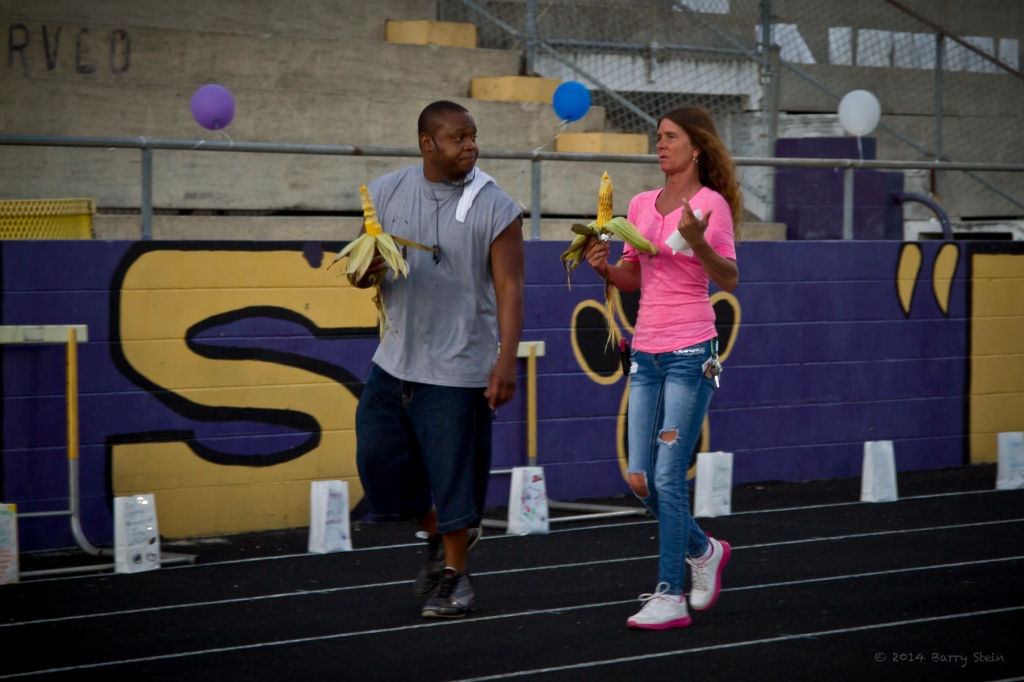 On the outside of the track surrounding the football field were small white lunch bags decorated with messages to the deceased, in loving memory to those who had moved on from this life as a result of cancer. On on bag that I captured was inscribed, “Goodbyes are not forever, are not the end; it simply means we will miss you till we meet again.”

Underneath a pop-up tent somewhere else on the field, was a little girl who showed me the back of her t-shirt in memory of the father she had lost.

Meanwhile on the other side of the field, some voluptuous women were creatively soliciting donations to fight breast cancer. Before long the sun set and there was just too much darkness at the event to capture any more pictures. I drove away trying to remember to appreciate every single second of healthy life; painfully aware of  how fragile we are and how common it is for any of us to one day get the surprise of very bad news.

Naturally affected by this event, over the days that followed, I decided to fill my eyes with beauty and life. The joy of a perky flower stretching out in the sunrise or the breathtaking beauty of a waterfront home being painted with a sunset. 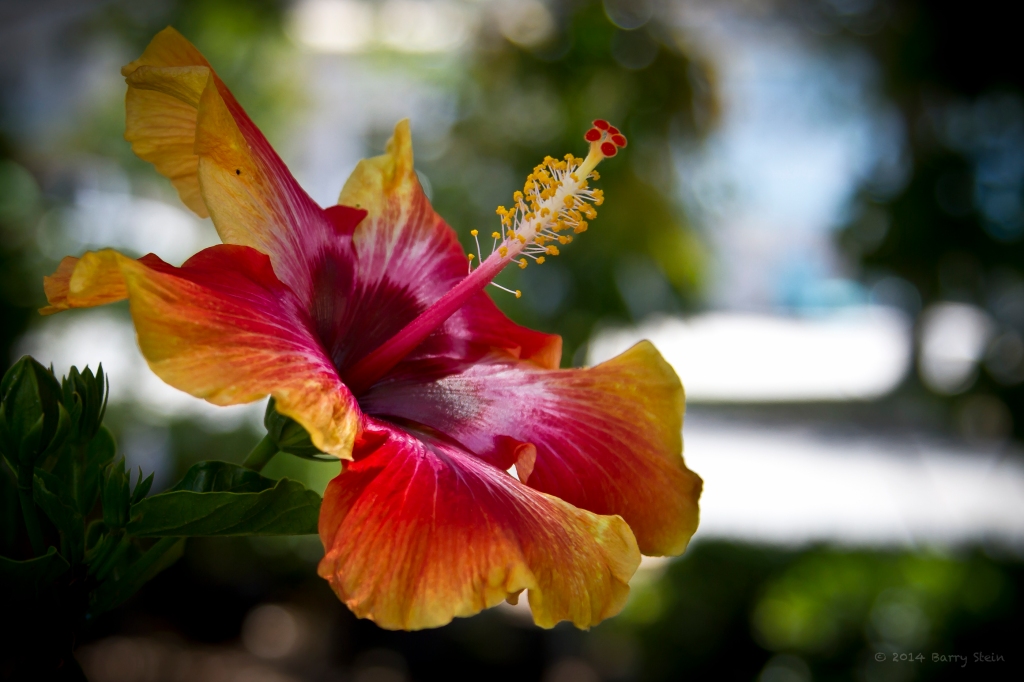 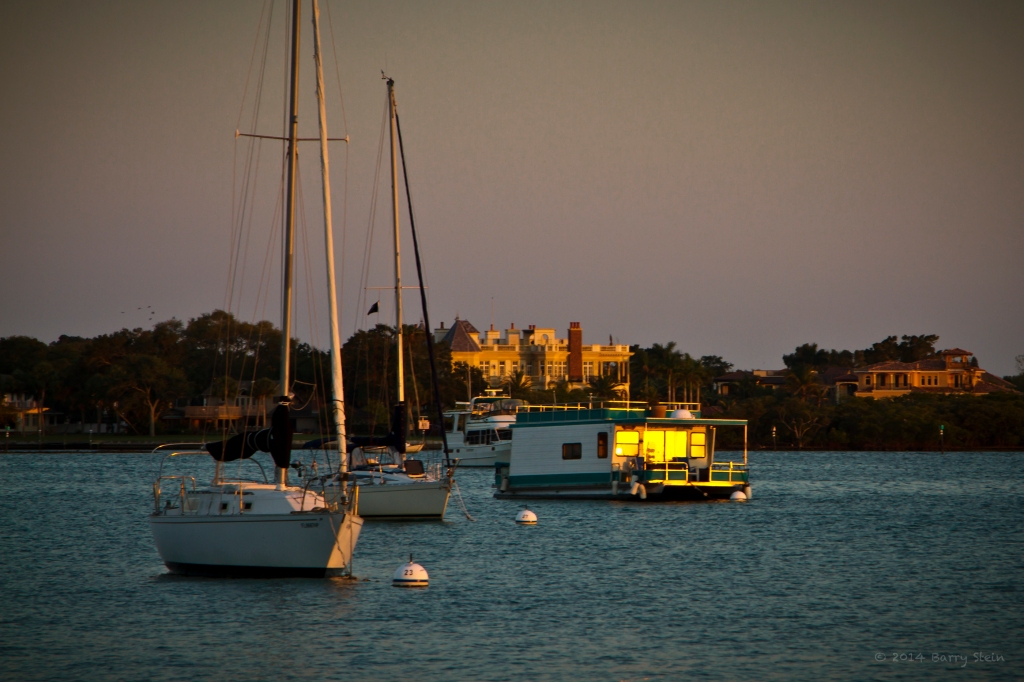 Life is so short and filled with regrets. I try to ride this life for all I can get out of her. Forever I’ve compromised my impulse for the more logical and reasonable choices. I put aside the pure artistic desire of want, in lieu of responsibility and being proper. But this year I finally surrendered my acts of maturity for the pure joy and fun gained from a car I can barely get in and out of, just to say I had the experience of owning it once.

To quote a woman I once knew who was referring to her shoes, “it doesn’t matter how they fit, what matters is how they look on me.”

Onward into my weekend of celebrating life, I found myself in a tropical paradise for yet another art festival in the Sarasota streets. Art festivals really bring out the eccentric and creative types of all ages. I caught a glimpse of this woman reading a magazine with her dazzling earring and matching nail polish. On the outside she may have been in her 70s or 80s but on the inside she was clearly still a teenager.

As I stood aiming my camera in the vicinity of a mirror next to a trash can, a woman came up behind me and asked why I was taking pictures of that trash can. That was all she saw as my camera was pointed in that direction. What she could not see from her angle, that only I could from mine, were the throngs of people walking past this mirror that was hanging on the side of a craft booth.

Life is so like that. With one thousand percent conviction this woman saw me shooting the trash because that is all that she could see, while the whole time, only I could see what was reflected for just a fleeting moment. As others criticize us for what they cannot see, we must remember to be compassionate to their limitations and must always be grateful for our own private journey. 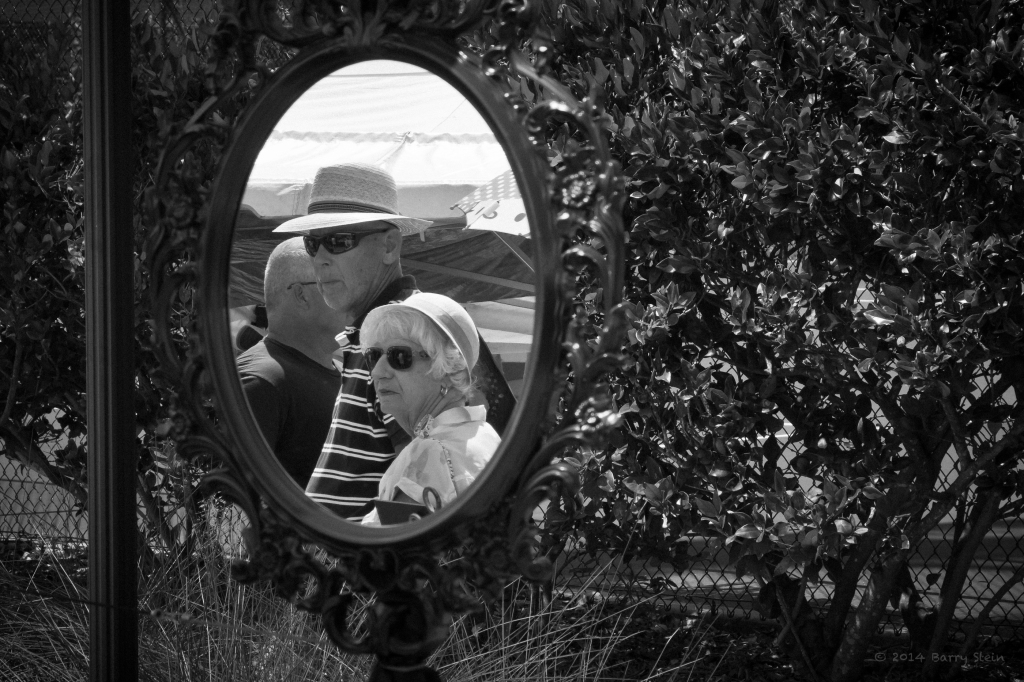 The beach behind the craft fair called out to me and I responded with awe. I only hoped that I could capture the pastel colored beauty that I saw, so I could share it with you. 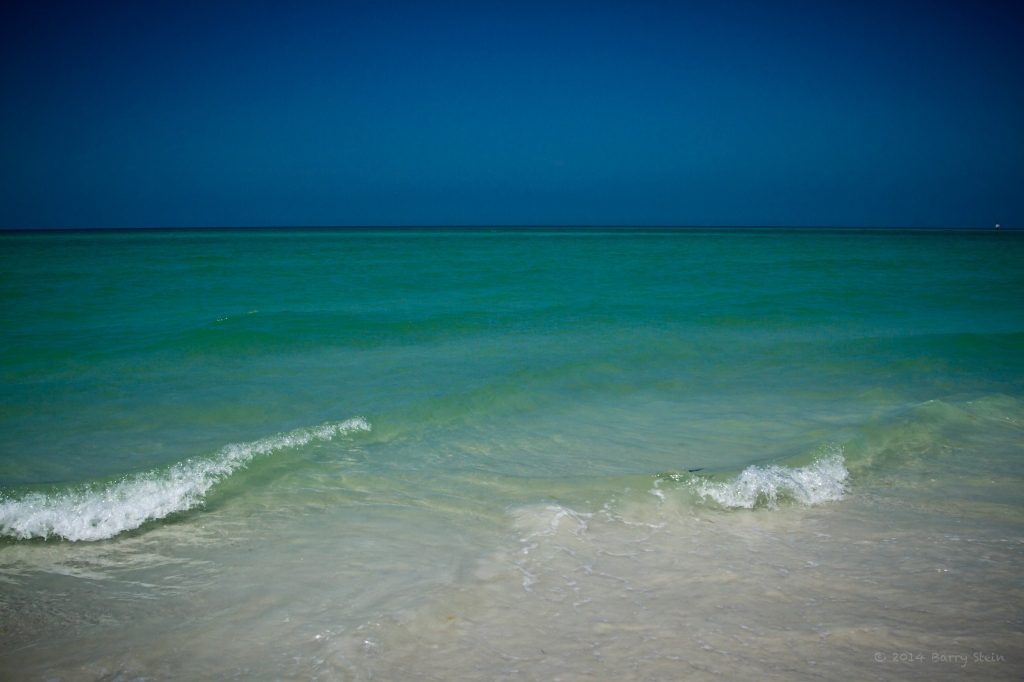 So much hot shiny splendor made me crave dripping ice old Margaritas! So I left the beach and found my way to the nearest Mexican Restaurant. As I sat at the sidewalk Cantina looking out on the festival, sipping my liquid bliss, I noticed a dog across the street who was bursting with life. It reminded me of my dog who I had lost to cancer and how this past weekend began, with the whole enchilada.