I think this has always been my problem. Do I take one marshmallow now or wait a while and receive two marshmallows later? What if later doesn’t come and I’ve missed my shot at the one marshmallow! I believe my career has suffered because sometimes, in the heat of a serious business meeting, when important discussions are being had, about creative ideas costing tens of millions of dollars, I might think of a clever pun, at that precise moment.

Do I dare speak it and risk eroding a meeting with focused colleagues discussing large risks or do I keep that pun to myself and lose the moment? “One shot”, I think… it could be the best pun I’ve ever made! And before I can pull it back into my mouth and avoid suicide by my peers, it has left my lips and belly-flopped on the meeting table. The lowest form of humor is out in the open, for the members of the board to groan at and use to plot my demise.

A compulsive disorder? Perhaps. Divine intervention maybe? I don’t know; it’s just who I am. Anyway, this past Saturday was no different. I had gotten up and out early that morning, in search of adventure and mystery, and had absolutely no idea where I’d find it. I knew north was no good, nor east or west… so south it was.

I drove down the usual highway toward the greatest potential for serendipity, when I got this idea to get off at an exit, that I never would have a reason to take. “One Shot”, I thought… and checked my rear view and at the last possible moment, I changed lanes and got off. I drove down this virgin road and passed a bunch of pets getting blessed in the parking lot of the local church.

Further down the road, I passed a motorcycle club convening at yet another church parking lot, in preparation for a rumbling ride. Before long I came to a major intersection and turned right. Drove a little further and noticed an old neighborhood across the street sitting in the shade of very old Cyprus and Palm trees. The sign said, “No Exit” and in I went. I drove around and saw some lovely old homes but a bigger yawn detour I could not have found.

As I came back out of the old neighborhood and saw no cars coming from the left… I looked to the right and saw an odd little sign that said, “Tampa BMX Next Left”. Had I not turned into that sleepy street, I wouldn’t have seen that little sign stuck into the grass near that corner. “This was my shot”, I thought… “maybe I’d find some good pictures at this thing.”

A quick right and a quick left and I found myself in a whole other world.

Strange people everywhere, taking their shot at BMX. Little kids, parents, teams, sponsored groups, they were all there. All around me were people not thinking things through. Not thinking whether they felt like doing this or that… they were just doing it. I caught this little bat boy conceiving of his strategy on how to attack his green ice pop.

Elsewhere, a dad was cutting his little girl loose on a deadly hill. I imagined he was whispering in her ear, “Take it, take the shot, don’t be scared, it may never come again. Just do it.” I too did it… I took the shot. 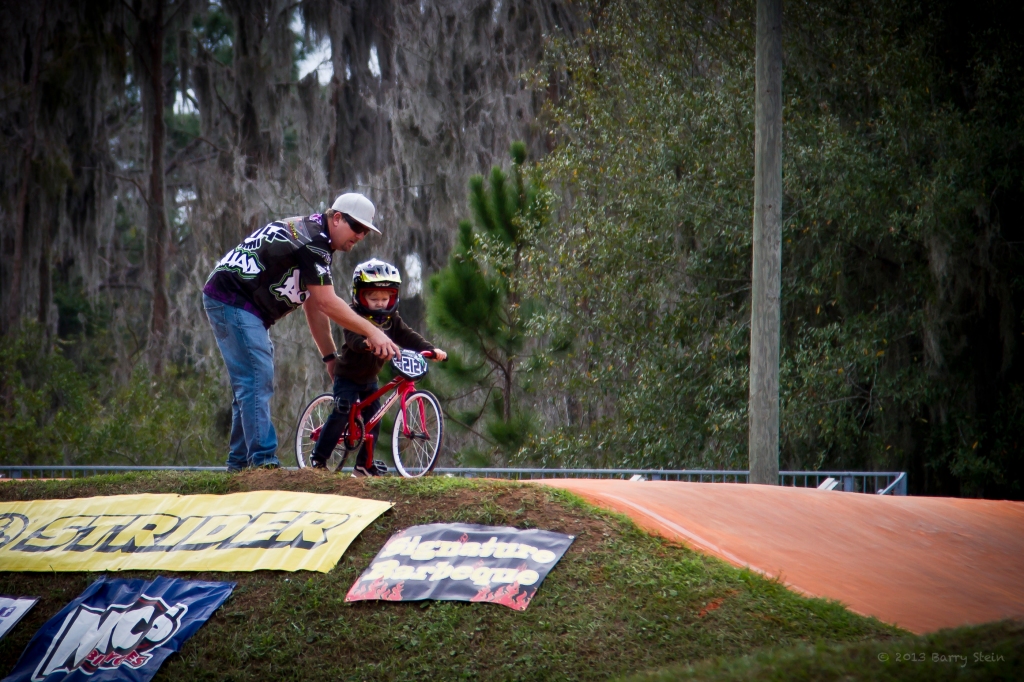 On the other side of the track was an odd fellow in blue. I stared at him and he at me. I thought… “what an odd paint brush beard. Take it! Take the shot!” I raised my camera and took the shot. I got the feeling he didn’t like having the camera put in his face. 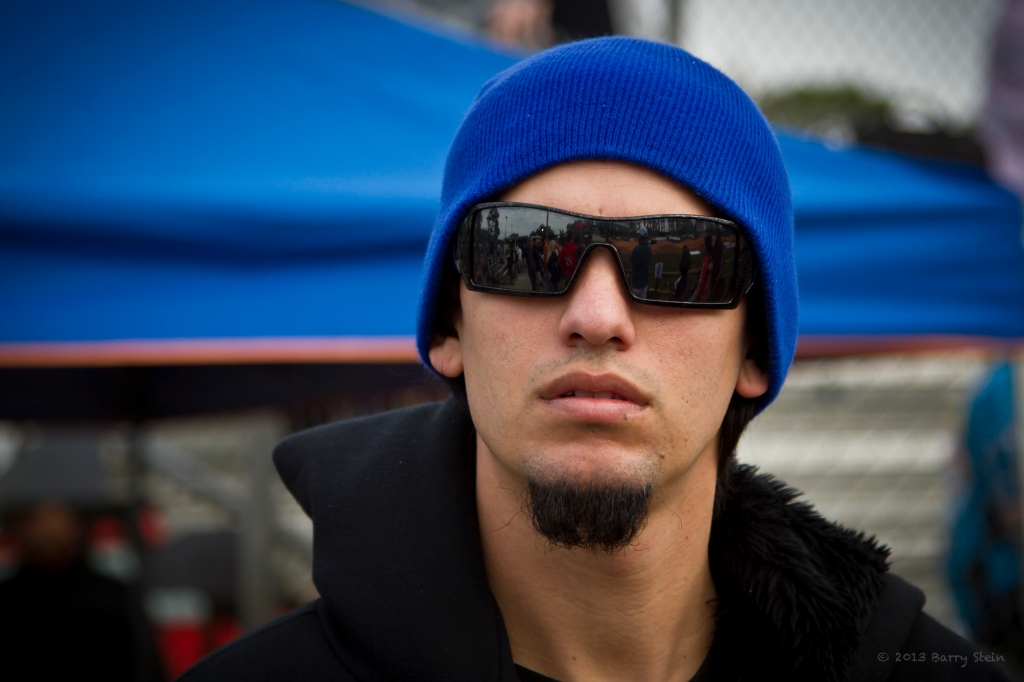 All around me were little mohawk helmet wearing people driven by fearless pure impulse. 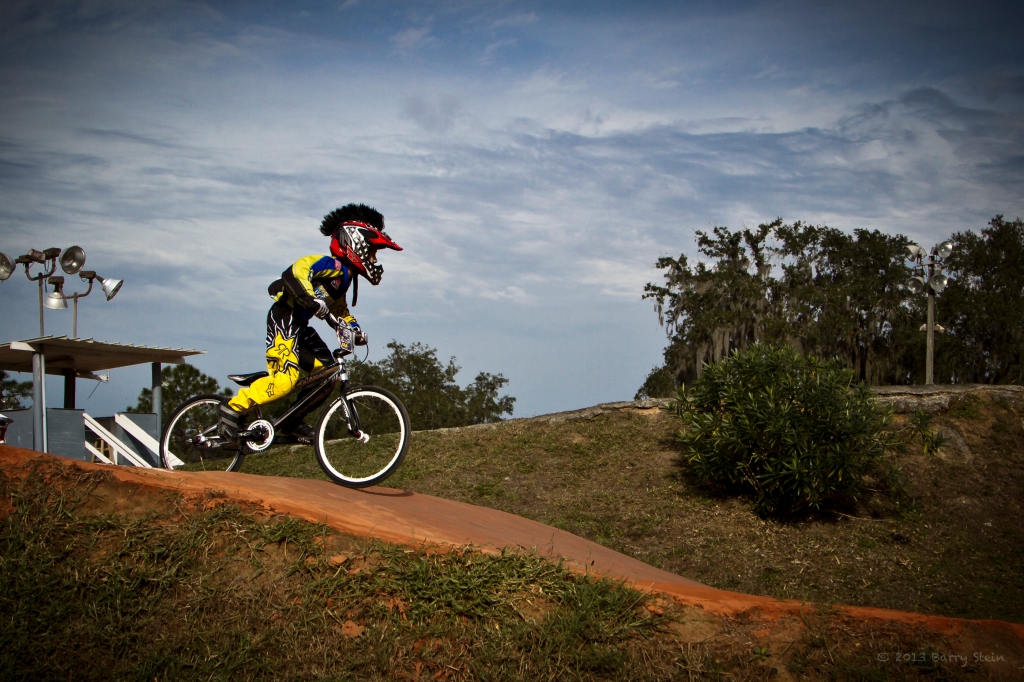 Back in the corner of the event where no one else would go but me looking for the unexpected, a BMX Biker Babe and a Gangsta wannabe were whispering real close in their private corner. I heard his thoughts, “take it… take the shot.” He grabbed her and kissed her. 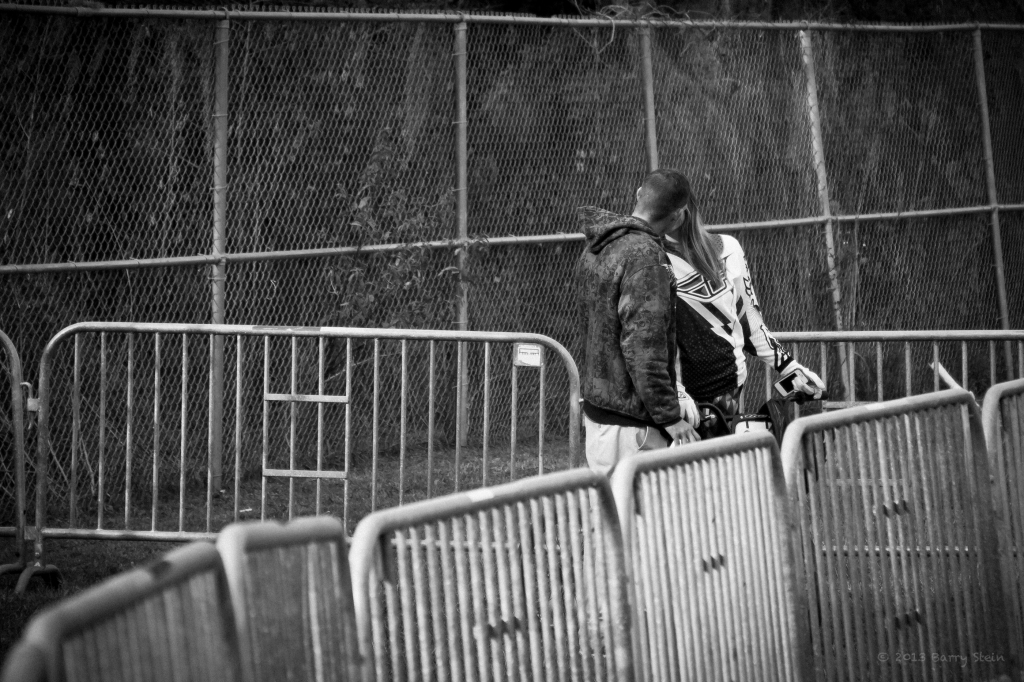 I heard her thoughts too. “He doesn’t ride, my parents can’t stand  him, but I feel something for him. I’m going to do it. I’m going to take the shot. If he turns out to be a loser, I’ll kick his ass and then kick him to the curb.” 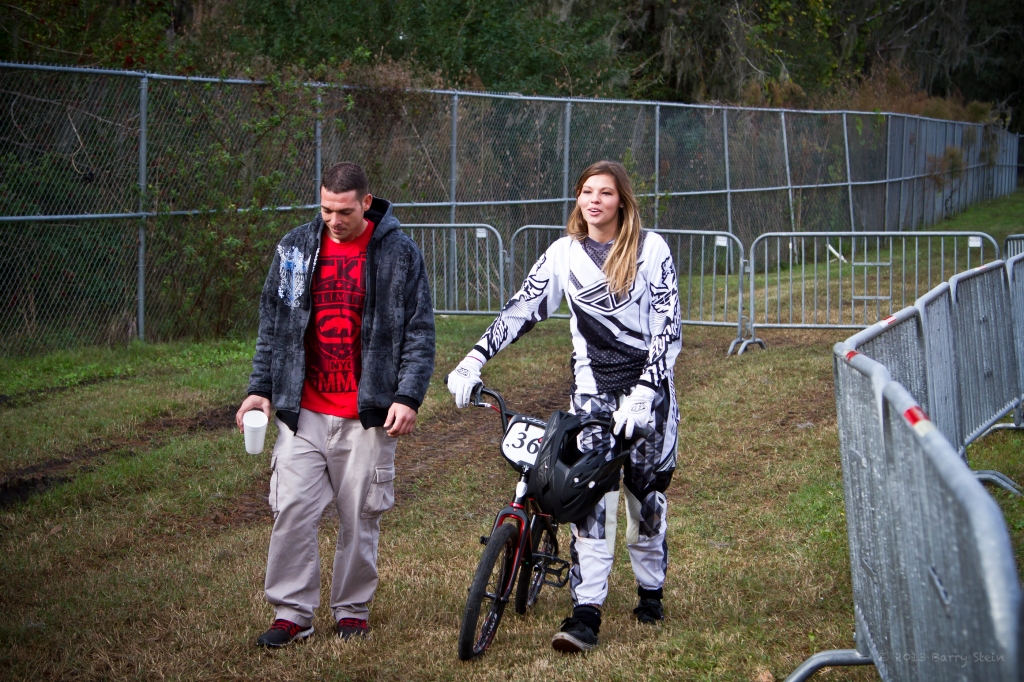 All around the event were people taking their shot. Babies taking the hill at full speed. When did we lose it? When did lazy caution sneak in and steal our passion for living? When did the punishment of poor nutrition become the choice over loving ourselves? When did we stop taking our shot?

The little boy has broken most of his bones before he turned ten. Nothing scares him and if he isn’t going fast and taking risks he might as well be dead. He see’s a pretty girl by the side line. He is completely unable to fear rejection; what he fears is not taking it… not taking the shot. So he walks right up to her and starts flirting. Full blown confidence and goofy expression gets the girl every time.

At four years old she has a mind of her own. Self doubt would never even enter her magical world. To her there’s only moods and actions. She wanted to wear the pink helmet, with the red star sweater and her cranberry tutu.

While others suffer on two wheels, a strange dude rolls out among the crowd on a green unicycle. “I’ll show them… all I need is one wheel. Take it… take the shot.”

Babies standing out in the crowd. “Take it. Take the shot.”

A protective father pushes his precious daughter’s head into a helmet. She squints as I pass. Take the shot Barry. Take the damn shot.

It was time to go. I had seen enough of this strange world where families all jump in behind the passion of the children. Oddly, as I got close to my car, I saw a woman putting on a pair of boxing gloves. I followed her for a while and then watched  her enter the ring with her son. I heard her yell to him. “G’head, take your best shot pussy.” Then I watched him run for his life. 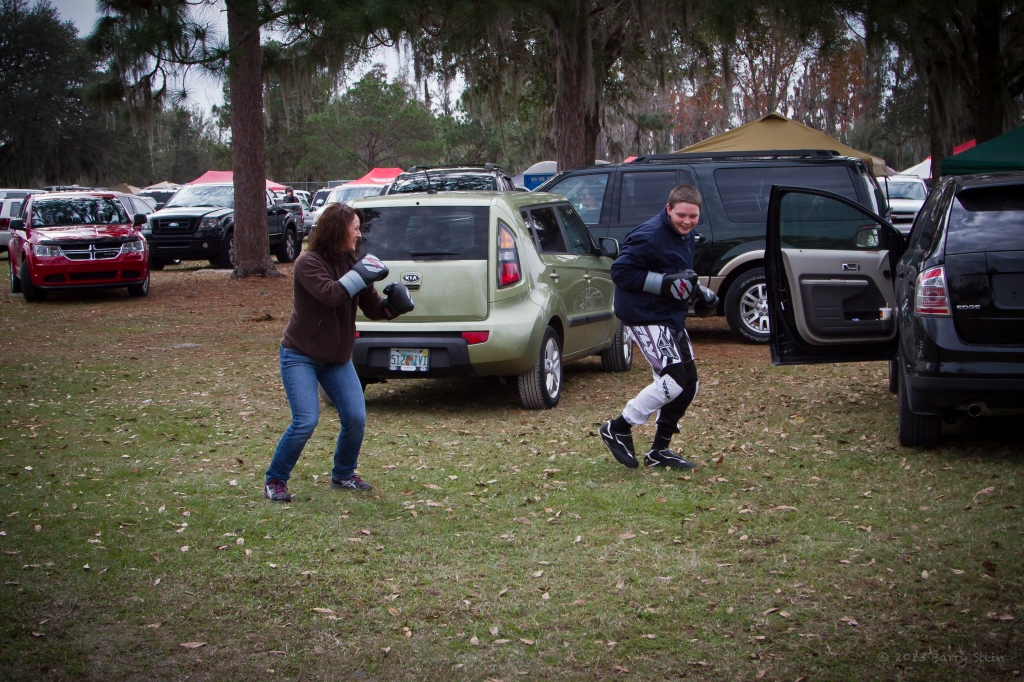 Exhausted from visiting this world where little kids ride like daredevils, I meandered home deep in thought. Taking more roads that normally I would never take. Venturing deep into strange places in search of strange sights. And amazingly, I wandered around this curve in the road and out of the corner of my eye, saw this girl flipping a giant tire in the front lot of a building.

I couldn’t believe what I had seen and drove around the block to get a better look. And sure enough there she was flipping that gigantic tire over and over like a football player or a marine in training. This pretty girl dug into that tire and flipped it again and again. I stood there and thought… “this is none of my business. I don’t even know where I am or who she is. But this, is something you just don’t see every day. Do I dare risk getting a picture of it?” And then I thought… “take it… take the shot you pussy.”

I ran to the back of my car and opened the trunk. As quickly as I could, I grabbed the camera and ran back. By the time I had gotten there she was done flipping the tire and started pummeling it with a huge sledge-hammer. I grabbed what shots I could but it wasn’t much by then. I felt bad for not moving fast enough and missing out on the moment. 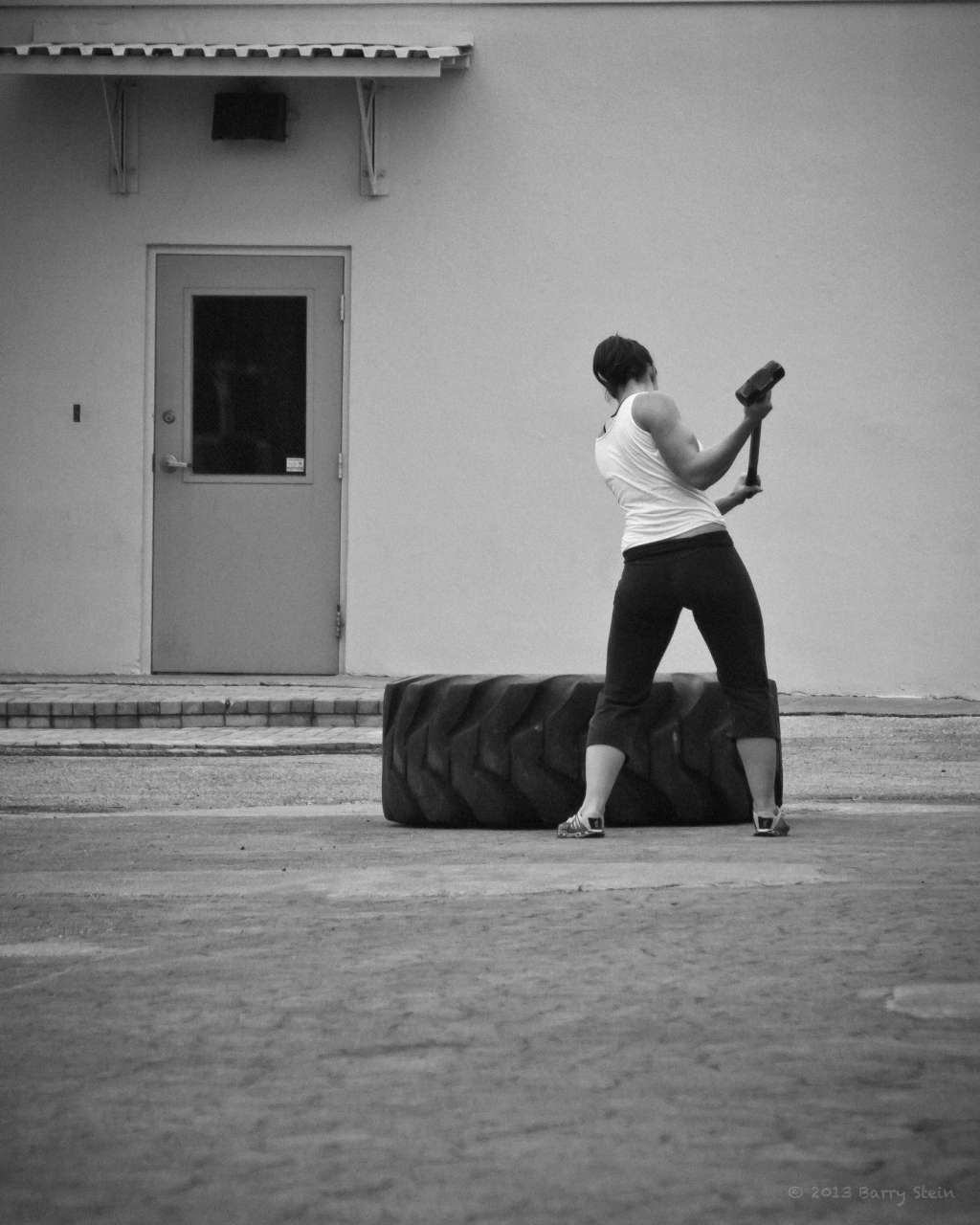 Apparently I had discovered the Elite Strength and Conditioning facility deep in the heart of Tampa. In fear for my life I made friends with the owner and the woman with the big sledge-hammer. I thanked them for letting me take the shot and I left so they too could close up the gym and go home.

As they closed the door, something called “The Muscle Board” was uncovered from behind the door, and it had a very powerful message on it, that made me glad I frequently take risks because I don’t want to miss out on anything.