At my current assignment there is a wandering Chaplain. He has no office, no financial objectives to meet, no ROI; he just wanders the workplace in the early morning and late afternoon hours looking for souls to heal. He listens confidentially and his mission is to strengthen the spirit of the staff to enable them to remain engaged and stay productive.

It’s usually around 6 or 6:30 pm when he wanders into my office. The rest of the staff is long gone and I’m still deep into the fine detail of making things form or function better. He enters quietly and unassuming, always with a big greeting and no expectation of delivering or receiving any giant revelation. Inevitably an epiphany is discovered by our conversation that moves us both forward with awe, then afterwards he wanders off… back to his omnipotent no place in particular.

Last week he wandered into my office and we got talking about relationships and conflicts and how most offense is felt by the one who perceives themselves as smaller. The smaller one or the one needing the most, is not getting what they want from the other and this is the source of conflict. The perceived offender does not do or say what the smaller thinks they should and conflict ensues.

The wandering Chaplain said, “Look to yourself for what is missing in you. Look to what is incomplete, the insecurities and the need and want you have to be heard or seen differently and you will understand the source of conflict.” Then he continued with the point of it all… “Does the huge battleship get upset when the little dinghy bumps into it? See yourself as the bigger one, forgive the transgressions of others with grace and focus on the scale of all you are and all you have, without need to be irritated by something so much smaller than yourself.”

That’s when I remembered that I had all these pictures still left in my camera from a couple of weeks ago. I became the big ship after that talk and went looking for that image that I forgot I had; a ship so huge that even a small building is dwarfed in comparison.

Even the metaphor of the high security around the huge beast, made it impossible for me to get close enough to present any photographic threat. So I was forced to steal odd layers, glimpses and collages… snaps of shapes and textures from a distance. 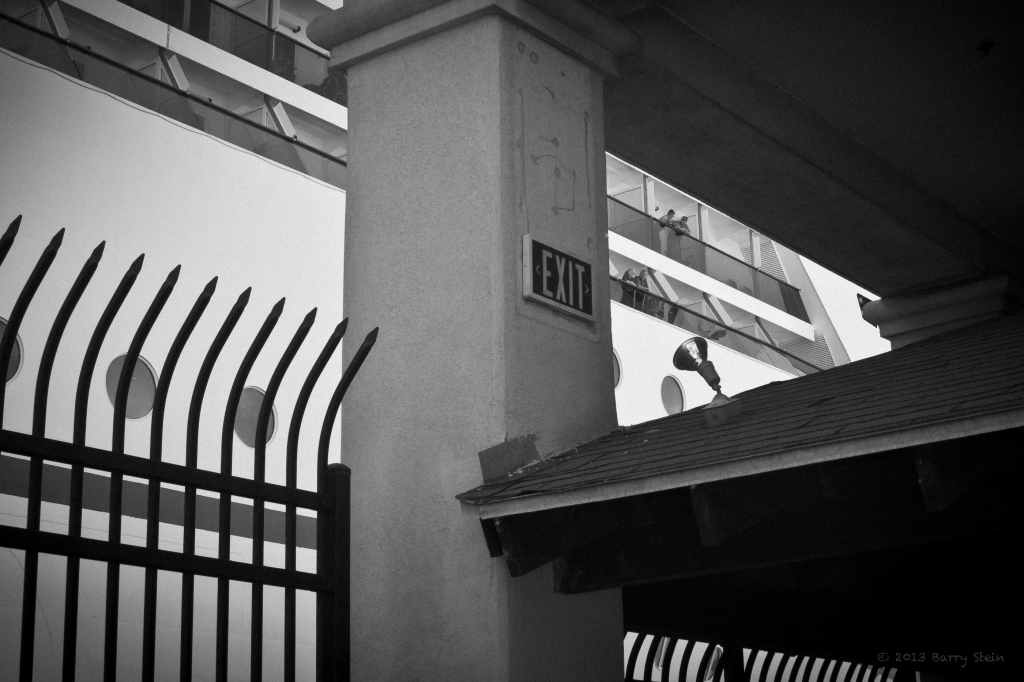 Then I continued my own exploration of the shipyard, looking for that which is present for all to see but is easily missed by those not looking to collect wonder. 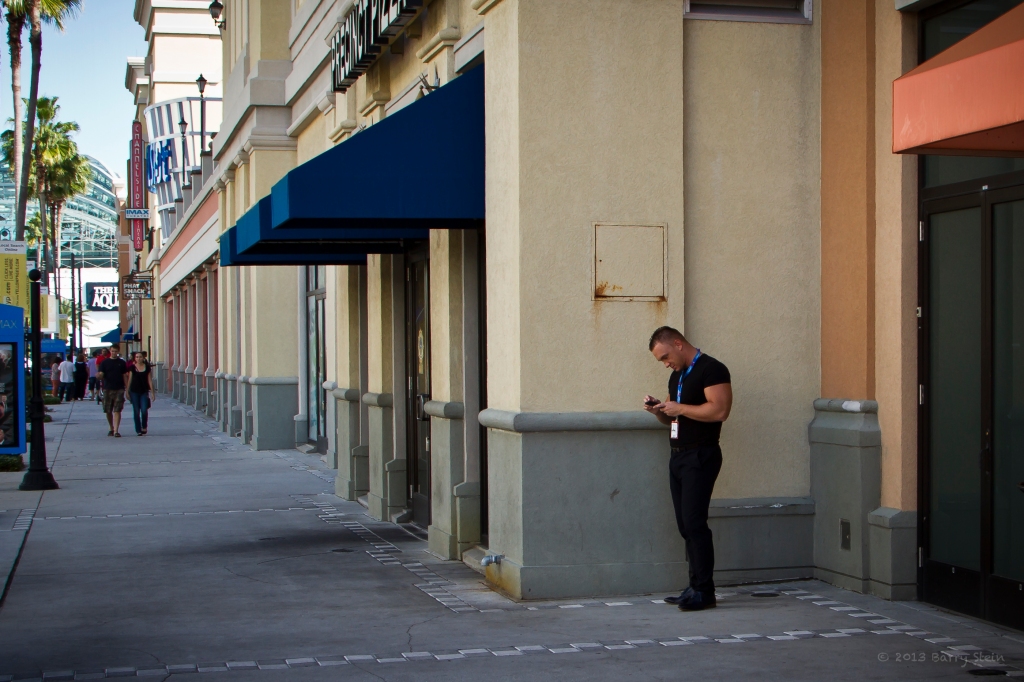 Not satisfied with the few captures I had left in the camera… I went out quickly and tried to get something juicy at a nearby carnival sponsored by a local church. Just something more to whet my visual whistle… sort of like a little something sweet after a savory meal. That’s were I was able to grab a few images of those who make their living convincing people that they could win if they threw darts. 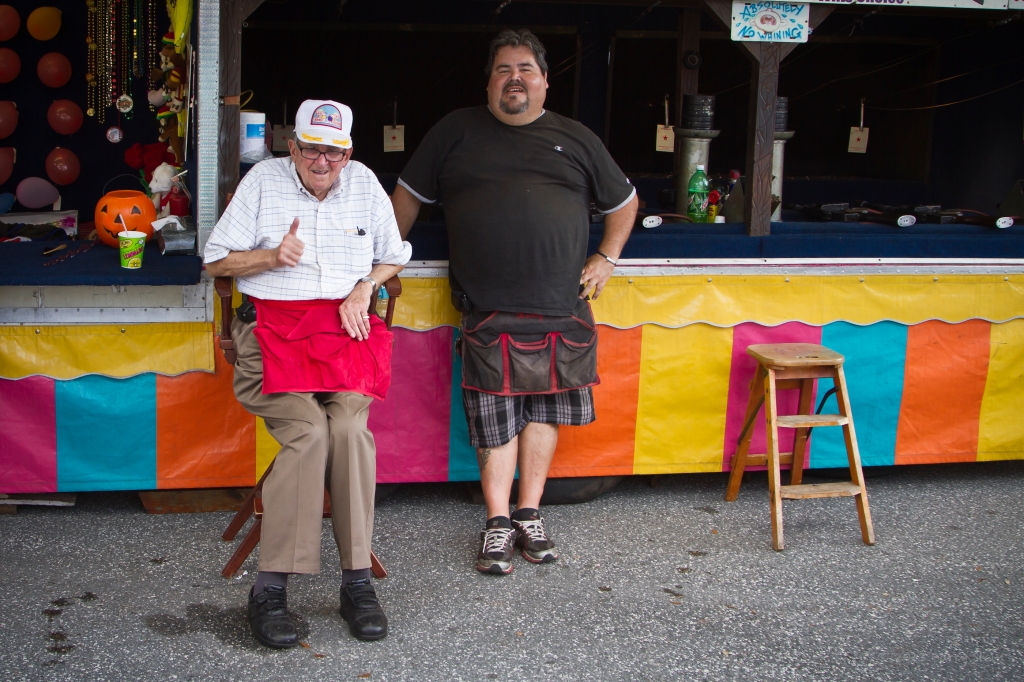 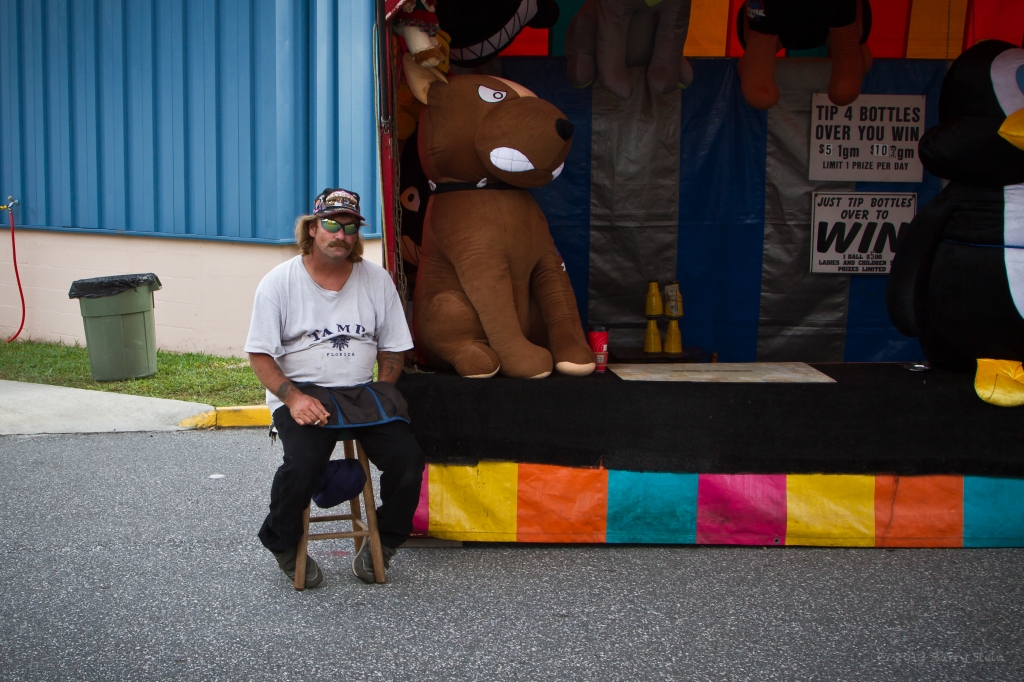 As I wandered through the carnival filled with the saddest and sorriest of sights, quenching their massive needs with fried dough, popcorn and sno-cones… I came upon a parishioner briskly studying the bible as he highlighted phrases, psalms and passages. 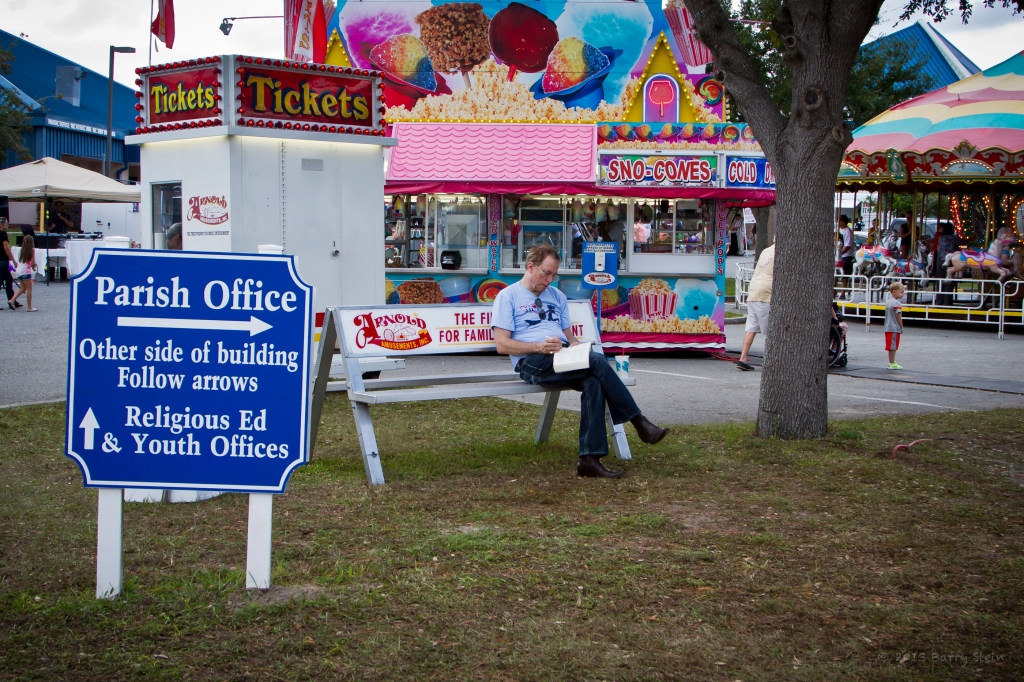 It reminded me again, of my talk with the wandering Chaplain. The idea of remembering all that has gone into each of our own individual lives, that more than qualifies us to be the big ships we are. Just then, three older ladies came walking at me. They were singing and dancing as they marched in step.

It would be so easy for them to choose to see the loss of dignity, strength and purpose that the stereotype of age sometimes deceptively displays. These ladies however chose to see themselves as big ole battle ships, navigating the straits through carnival booths designed to pitch the temptation to win, in exchange for the hard-earned fruit of labor. These ladies had no need to win anything; they were already winners and walked on by. 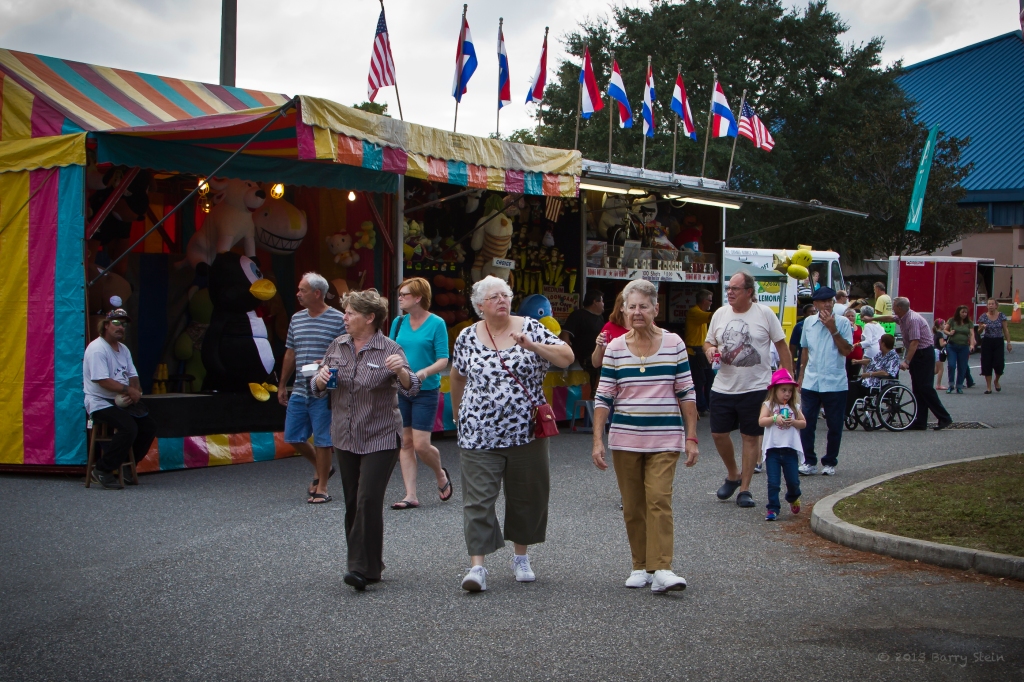 I proceeded to leave the church’s fund-raiser event and had to pause at the cluster of tiny patrolmen standing in front of the giant beaded lady. This too reminded me that the scale of authority is only what we give it. 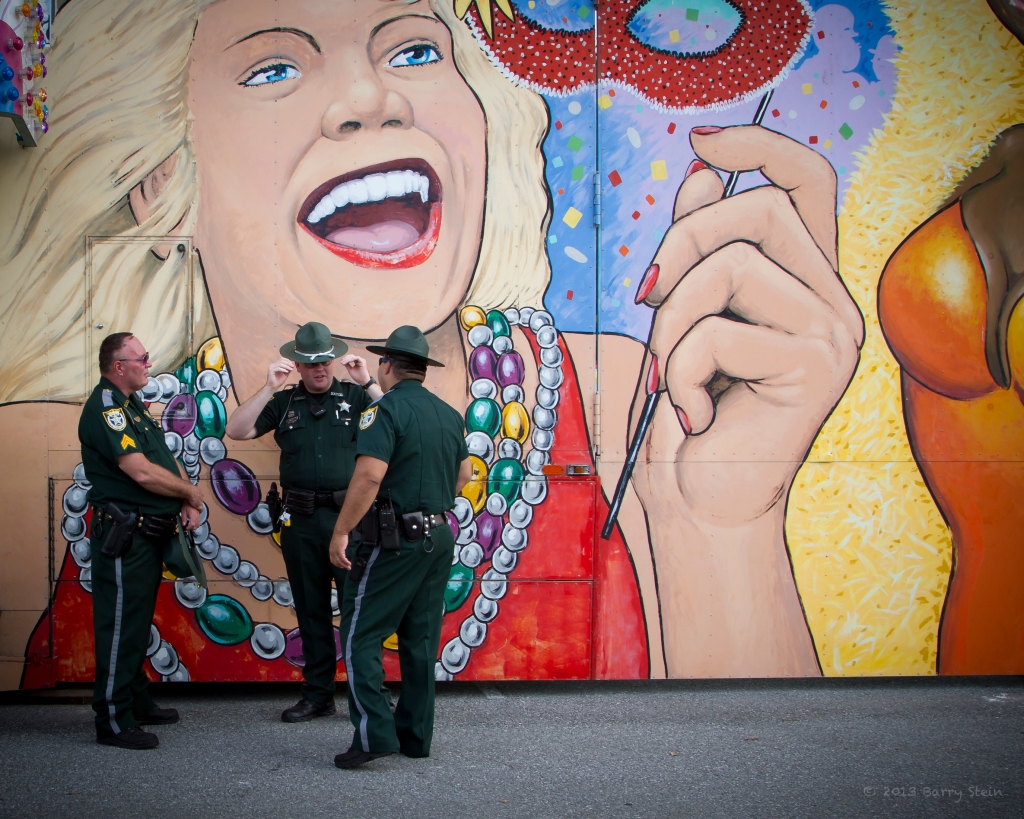 And then I passed the ultimate puddle. It was the Shark Attack booth. I had no idea how to play but was attracted to the message behind its invitation. “Fish till you win” and “… prize every time…get medium… get large…”. 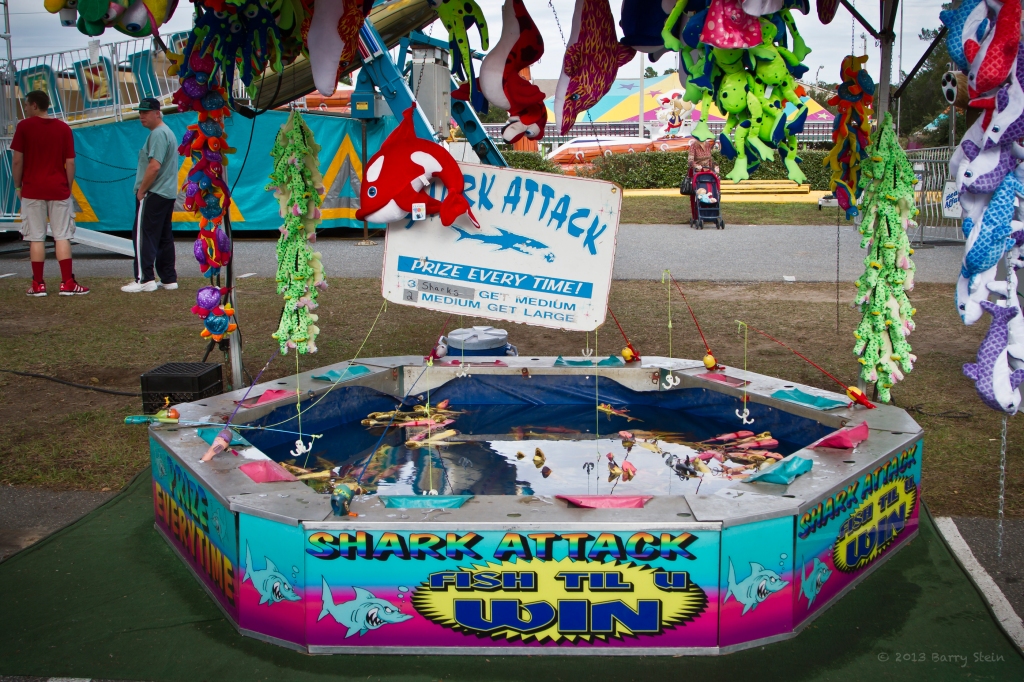 As I proof read this little story, I became aware for the first time that it started out with a story about a Carnival Cruise liner and ended with me cruising through a carnival. I guess life is shockingly connected like that sometimes.