This afternoon a woman who I work with, came to me with a problem. “An organization I’m involved with is sponsoring a float in a parade and I need a great idea.” She said. “The theme is children around the world and I don’t have any idea what we should do. I heard you were a creative genius and could give me the answer I seek.”

I waited a bit for my swollen head to settle, then began to suggest ideas. I wondered what children all around the world have in common. Then I wondered what we as people all have in common, all starting out as children. That’s when I thought of fairy tales, fables, Dr. Seuss, toys and games. Lost in the crazy place deep in the back of my mind, I saw millions of colored balloons and of course, bubbles.

My eyes popped open and asked the woman if she had enough to go on. She nodded and she soon left my office. Secretly I thought to myself, “well now I know how will start the story of this adventure.” I thought it was a magical sign from an unrelated creative investigation that would bring me to the front door of this next blog.

It all started early one Saturday morning as I drove to St. Petersburg for a routine visit to the Saturday Morning Market. I pulled into the parking garage, paid the guy the $5 and parked the car. As I got my camera out and walked over to the market, I once again felt discouraged with the probability that there couldn’t possibly be anything to shoot at this market.

That’s when I ran into the guy on the scooter with two poodles in tow. 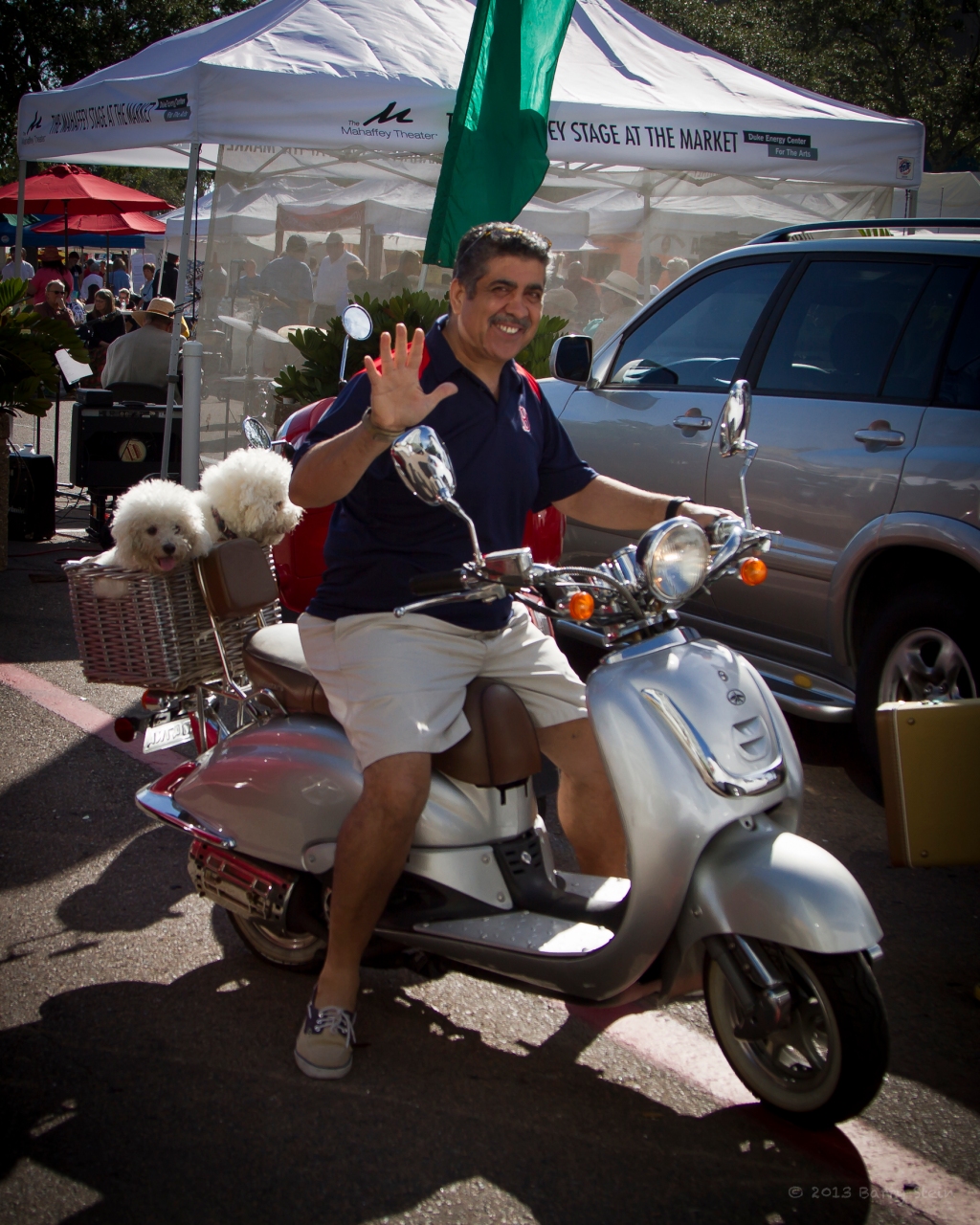 Well that was certainly odd but what else could there possibly be to shoot. I mean really, how many times can I shoot the shiny sun off of ripe orange peppers? That’s when I saw the crowd gathered around the booth of wild predatory birds. I only saw the baby owls at first… 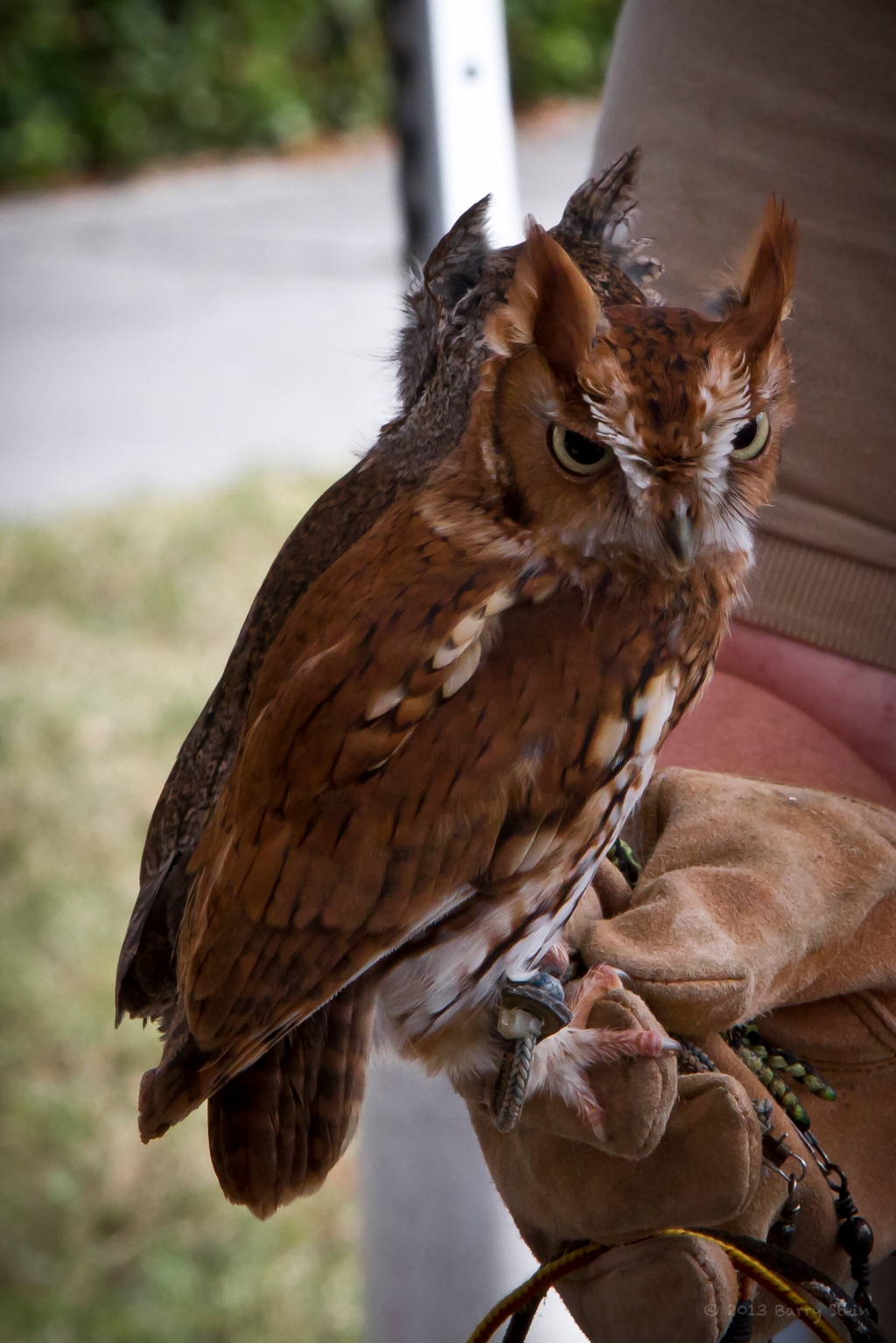 Subtly standing next to the handler of the baby hooters was an unassuming chap with a large orange snake curled around the front of his Dockers. 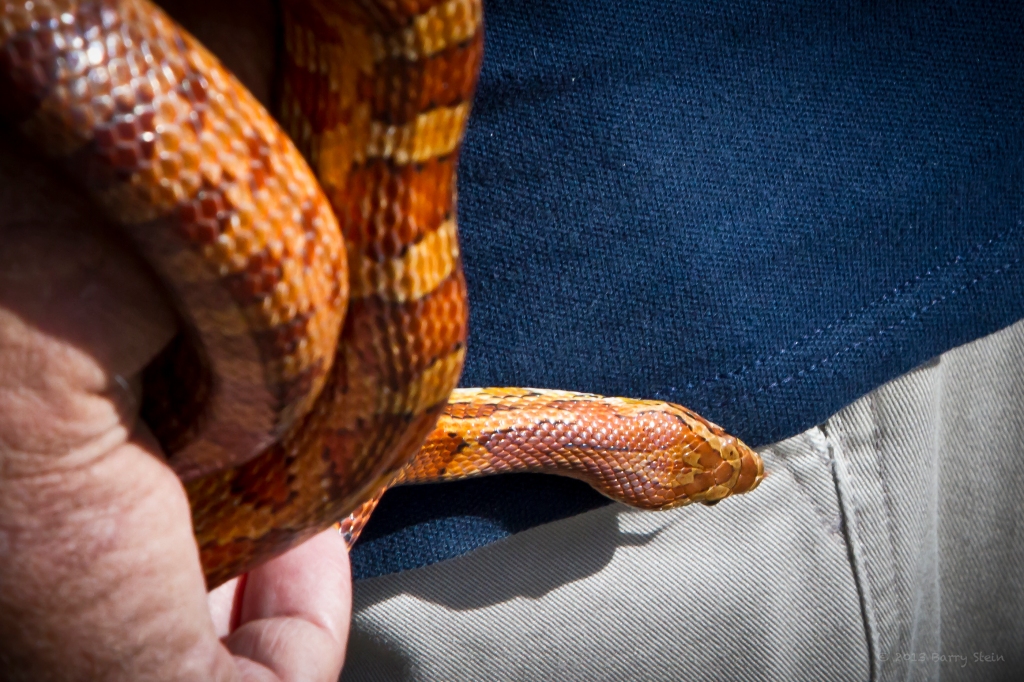 I strolled around the market past the usual chocolate pasta, the best guacamole in the world, the exotic jewelry designers, the bakers, the knife sharpeners, the hat makers and dress makers and had to stop at a small florist’s booth. A little lily was cuddled up against some bamboo. I stole its image and had no thoughts about the damn purple thing except, I just liked it. 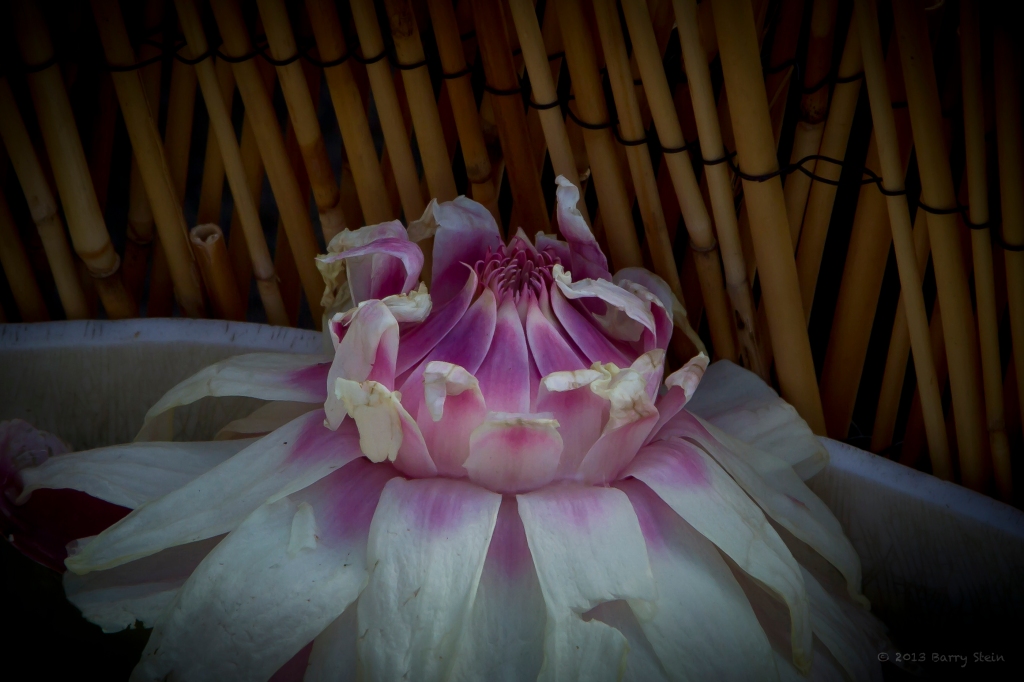 And just as I started to get discouraged about there being nothing else to shoot, I saw another crowd gathering back by the baby owls. So I strolled over there and found myself seduced by a mighty bird of prey. At first it was just another head among the crowd till I got closer and started to stroll around it. I watched how the light twinkled in its eyes and how deep and thick its feathers were.

I took a deep breath and crawled into my camera and began to grab images. 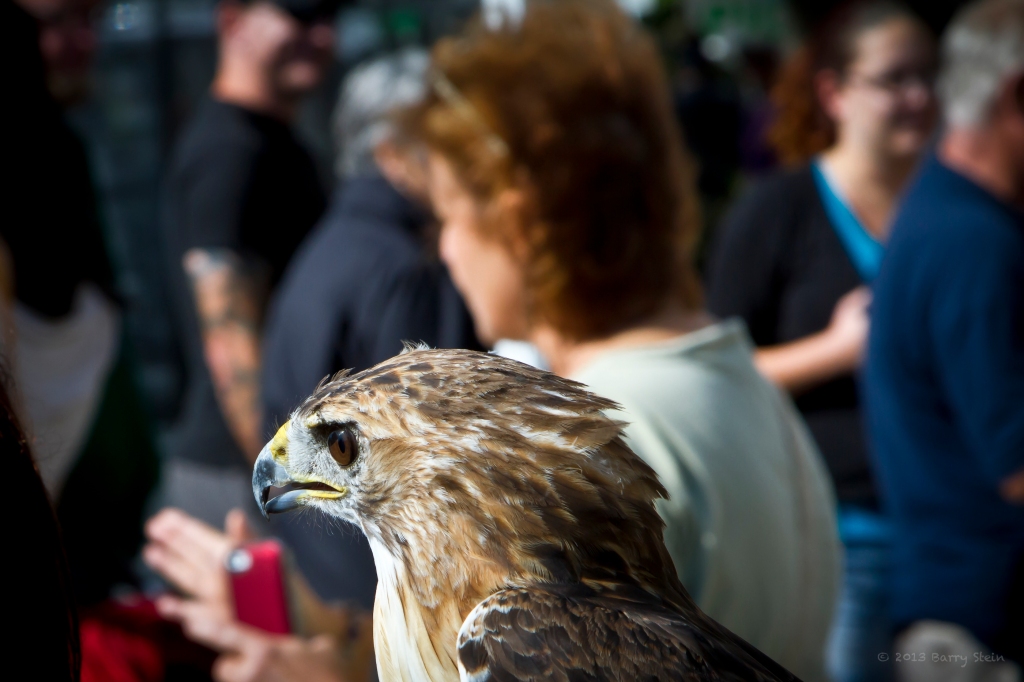 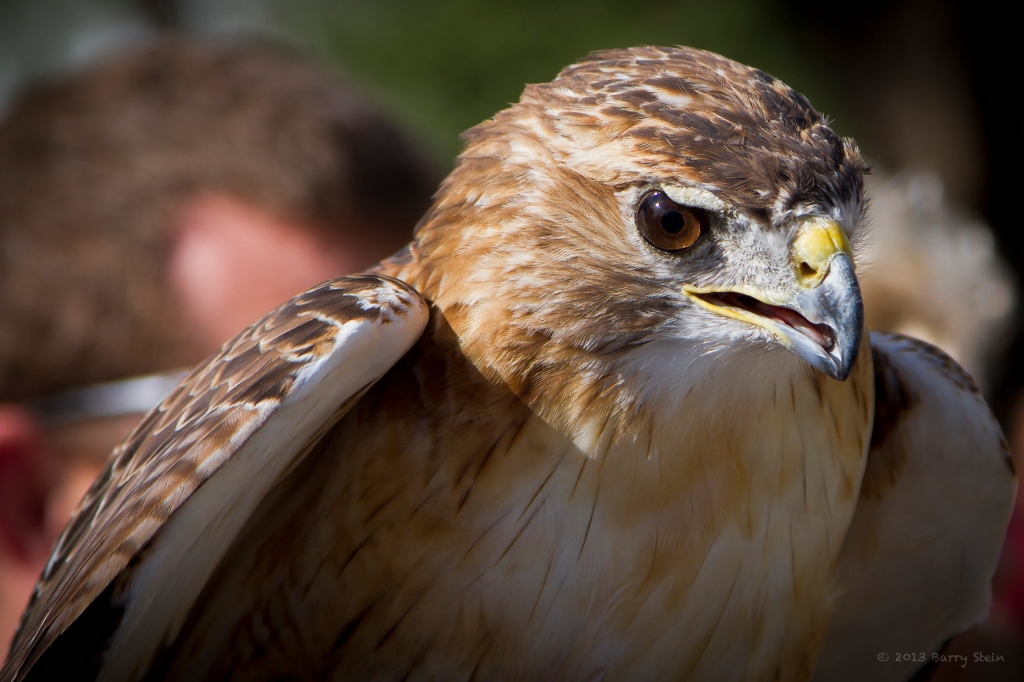 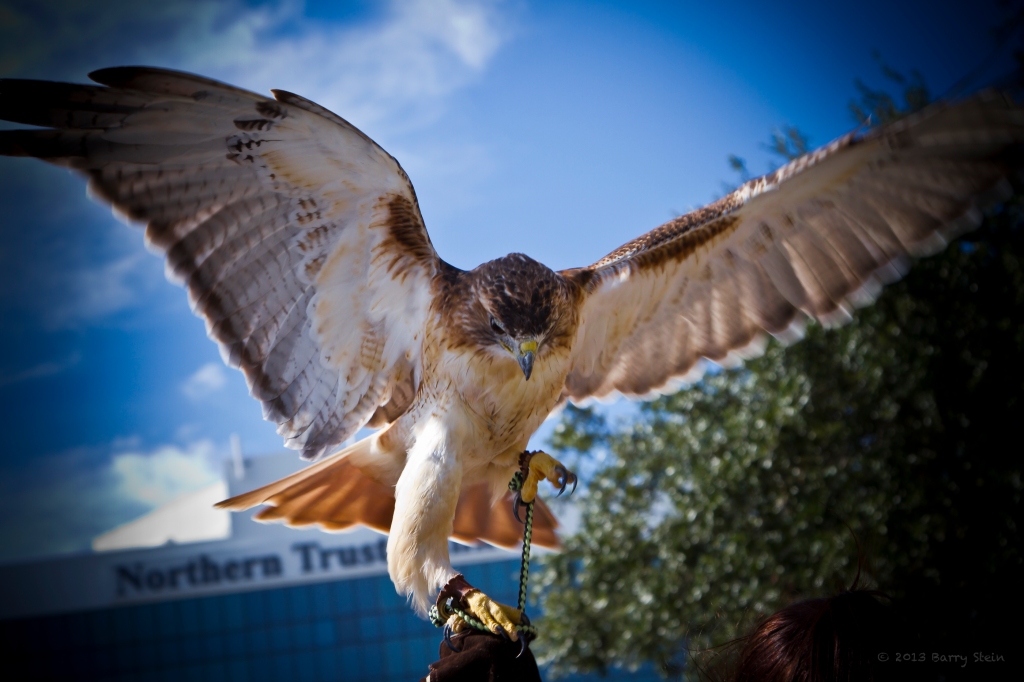 So mighty and so magnificent with such deadly sharp talons. I shot tons of odd photos of this bird… and I actually caught it winking at me. Have you ever seen a Hawk or Falcon with its eyes closed? It’s kind of creepy because they look dead, so I didn’t include them in the series, but I have them.

I walked away thinking that this surely would be the highlight of my morning. A mighty Falcon spreading it’s wings and raising its claws for me. What could possibly top that? I walked past the hippie dress makers, and the smoked ribs… I watched parents with babies and young girls in high boots. I watched every type of person in every age wearing every conceivable fall fashion for a brisk Saturday in Florida.

At the end of the aisle of booths was a funny fellow. He had a torn open, gallon plastic jug, cut in half sitting on the street. It was filled with soapy water and he was dipping a ring of rope into the plastic container and pulling it out with two sticks. I watched as all the children from all over the world gather with fascination at this simple toy.

People of every age joined in the familiar giddy play as huge bubbles were created from a ring of rope dipped in a torn half-gallon jug. 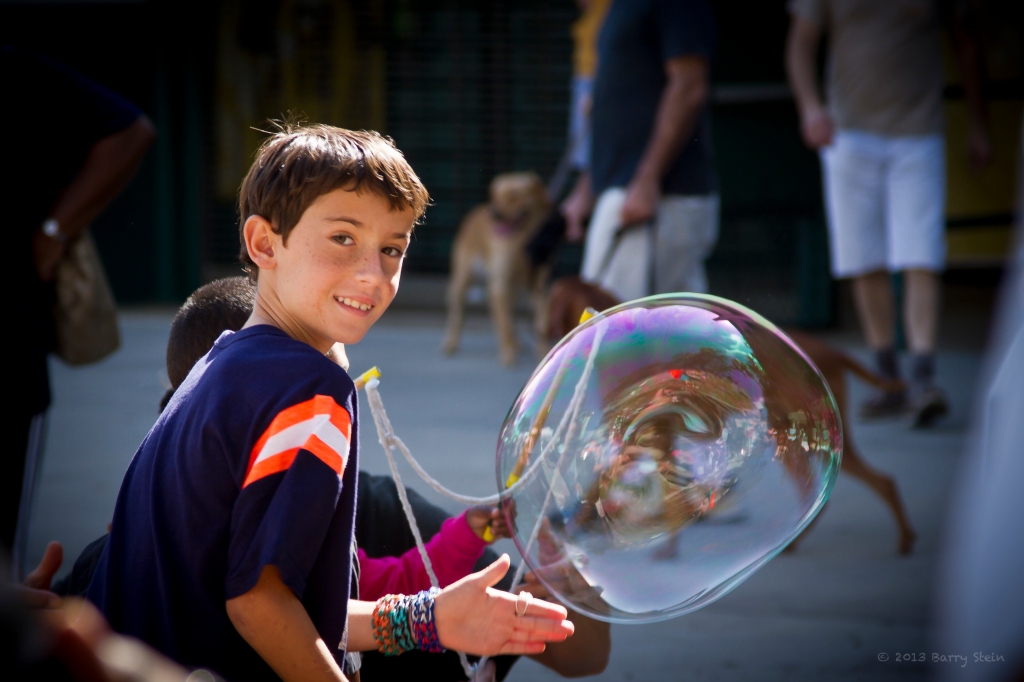 Such a precious perishable moment does a bubble represent. Born at that second and soon to burst, it fills, it floats, it reflects all that is around it and then, it magically pops as if it was never there at all. 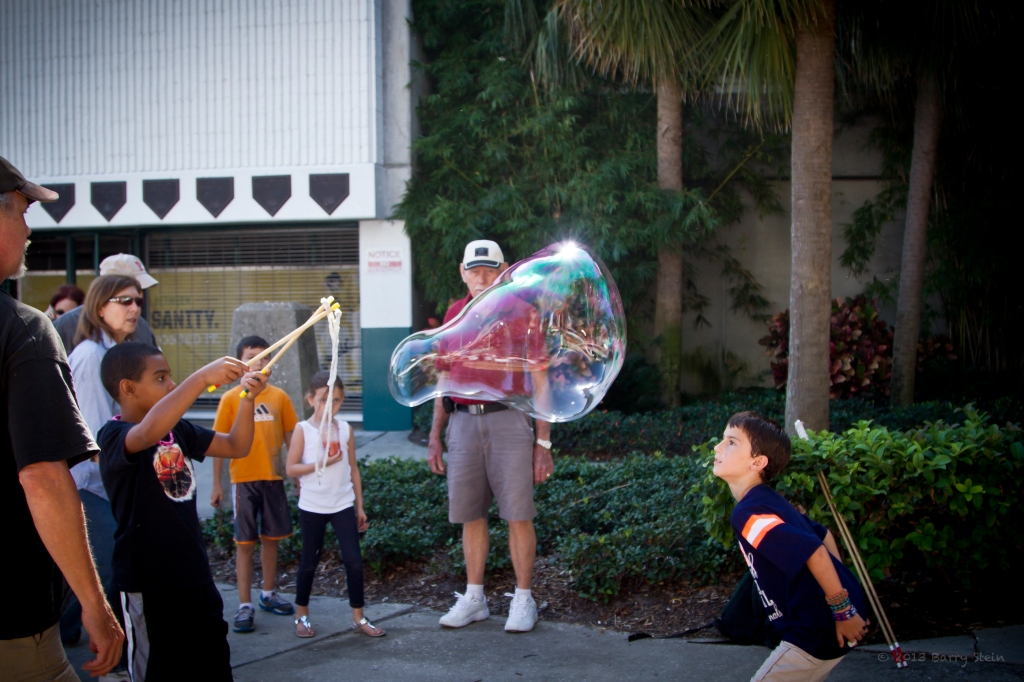 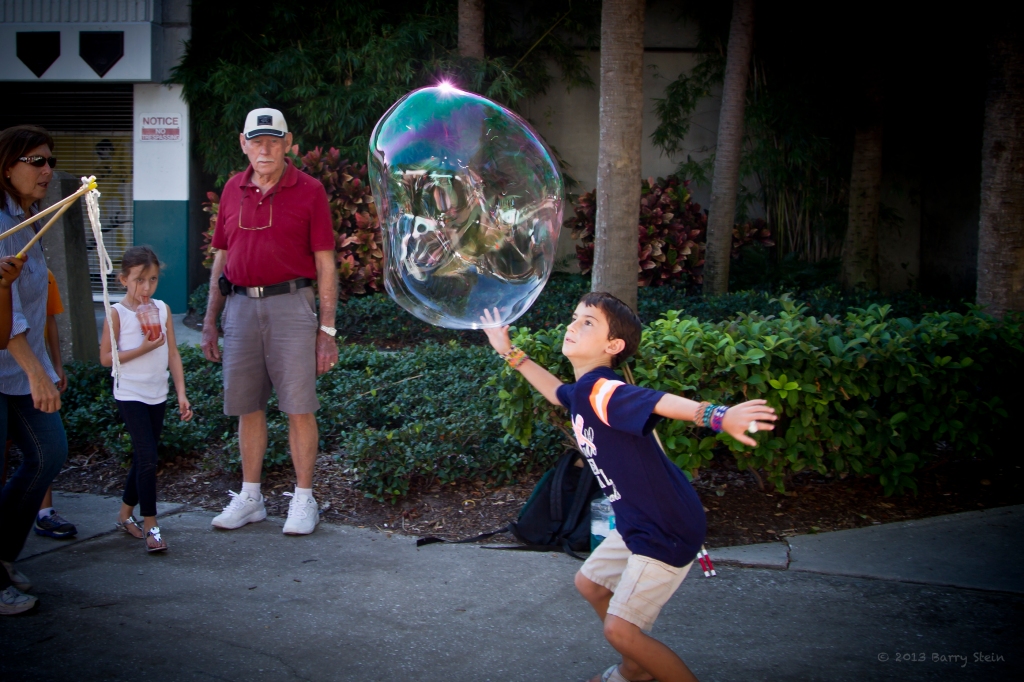 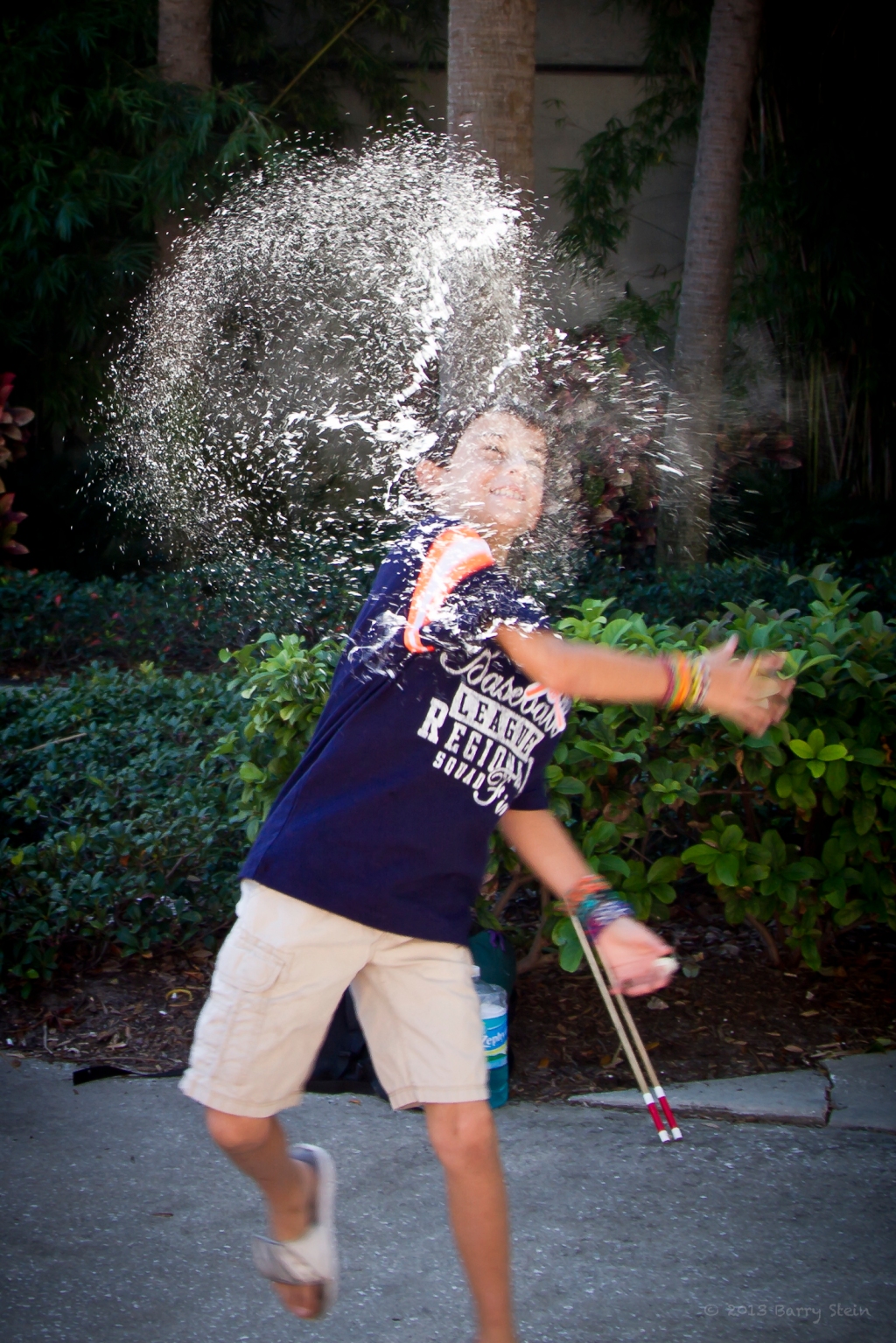 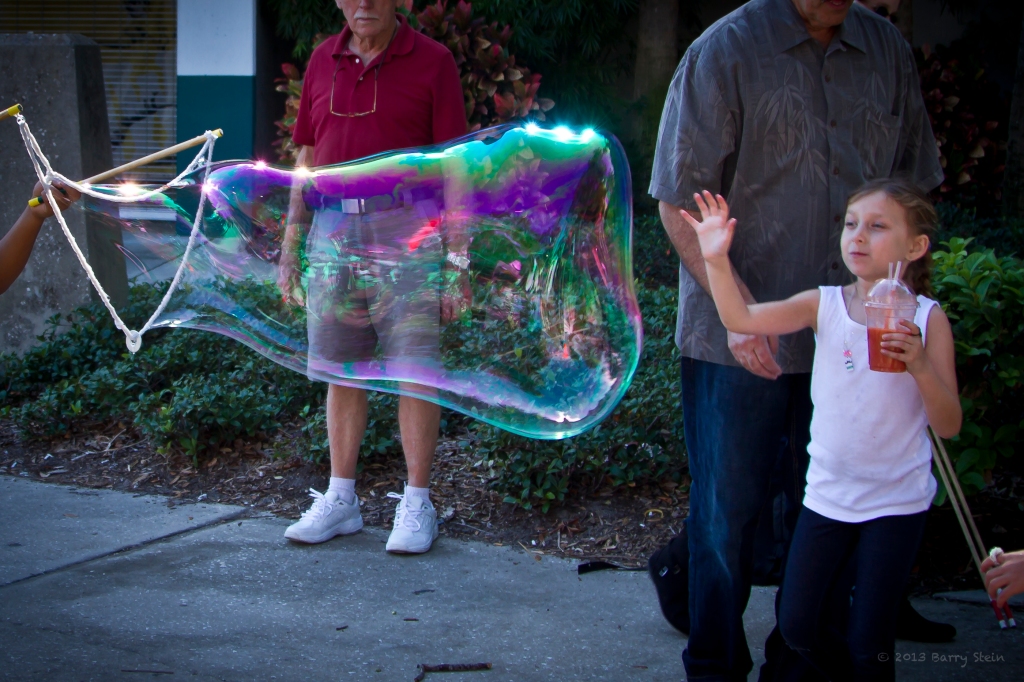 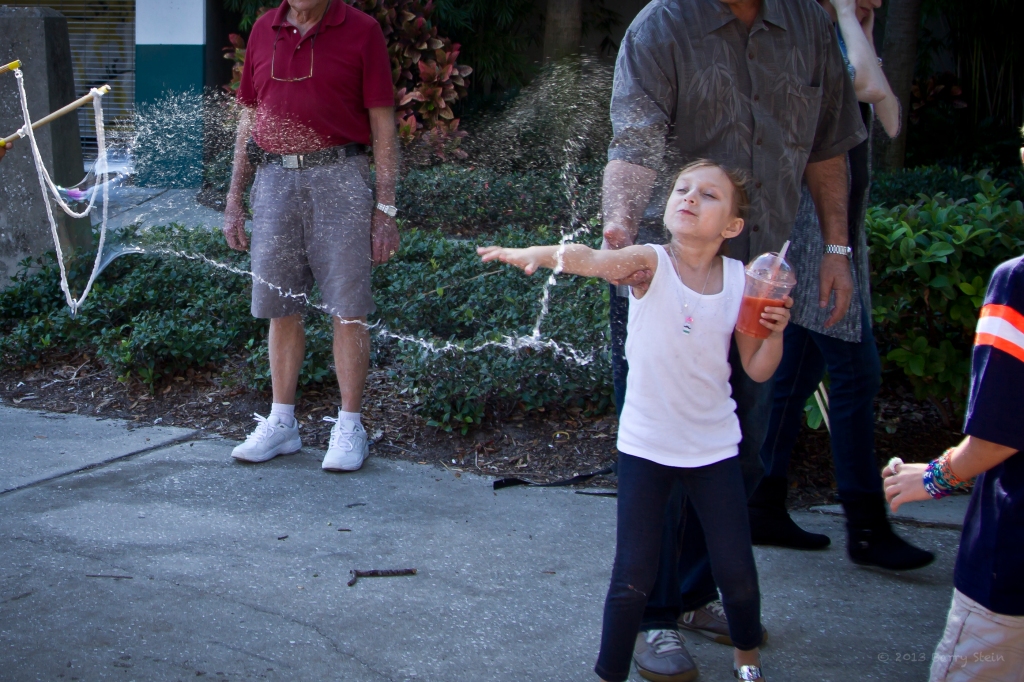 I watched and marveled. I’d had my fill and had other places to go, other people to see and other things to do. I left the market and headed back to the car. As I waited for the light to turn in my favor, I looked over at a disabled man at a cross walk. It almost seemed like the sign should have been bilingual… offering images of people walking as well as those walking with walkers.

Way across town, there was a craft fair going on. I always like to see these events because there are usually some phenomenal photographers there. They make me wonder if I could also someday have a booth and sell pictures of my silly adventures. I just don’t know if others will want to pay to see the world as I see it.

As a matter of fact, as I strolled the show, what I saw was not the crafts people displaying art in their booths, but the crafts people on display, as art, in their booths. The booths looked like exhibits to me and the artists in them were just part of the show. I started to lose the distinction between the people in the booth, as the sections inside the booths seemed to frame the people, as if they were subjects within paintings on display.

Soon, I couldn’t see the people in the booths separate from the framed art displayed in the booth; they were apart of the art. 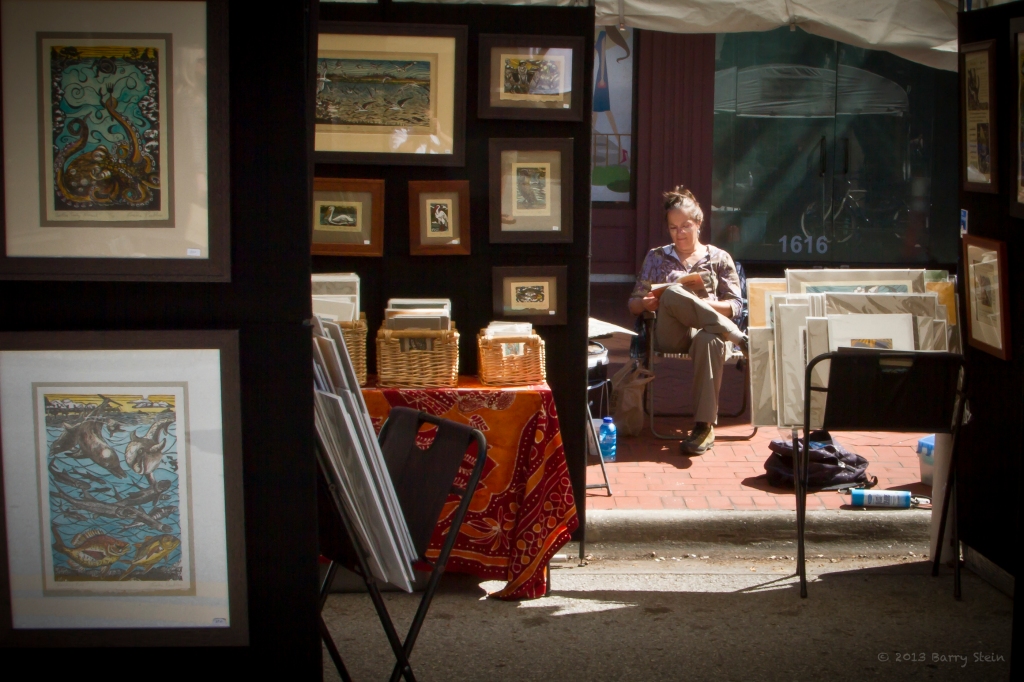 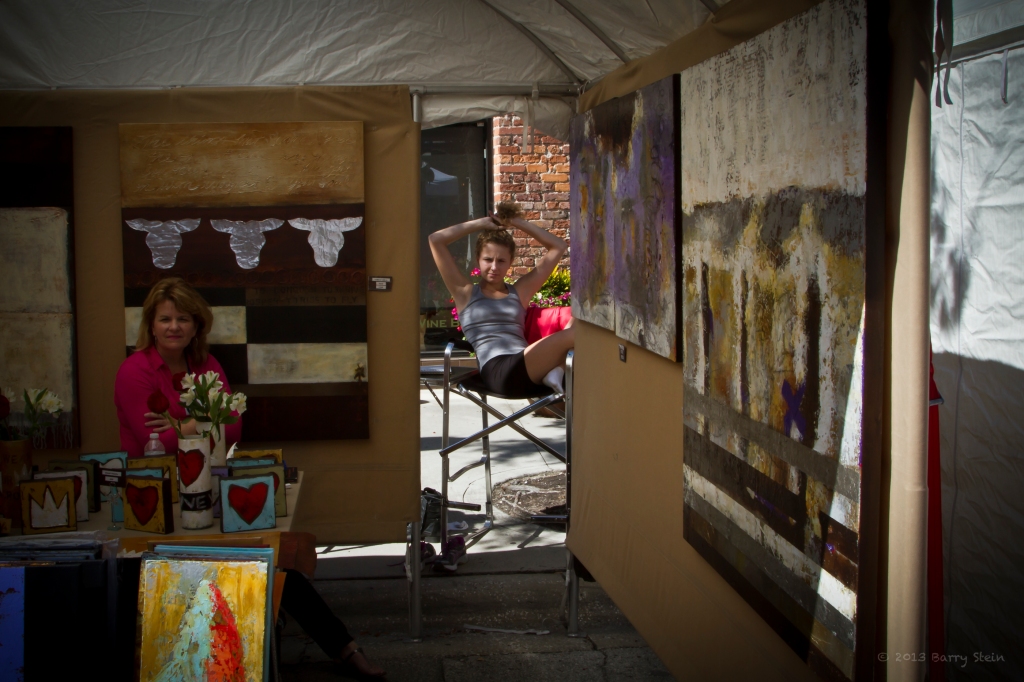 And then the craft show was done and on I went to the next and final destination for the day. It was time to see the great bed races rolling down the streets of Ybor City. I stopped and got a couple of slices of pizza and a bottle of water; it came to about $8. I remembered when I was little I used to get a slice of pizza and a Coke for about $2.

I’ll never forget how the guy behind the counter would ask me what size Coke I wanted. “What size you want? Large or Big?” My whole life I’ve wondered the difference between large and big.

Anyway, I snarfed down the pizza and was able to get a few shots of teams in costume racing beds down the streets.

I wondered if maybe that lady could use this idea. Maybe, we are the children of the world, is about a giant bed filled with toys, stuffed animals and dolls. Maybe her float should be a bunch of people dressed up as fairy tale characters jumping up and down on a giant children’s bed blowing giant bubbles into the air.

Hmmmm… I’ll have to give her a call in the morning. 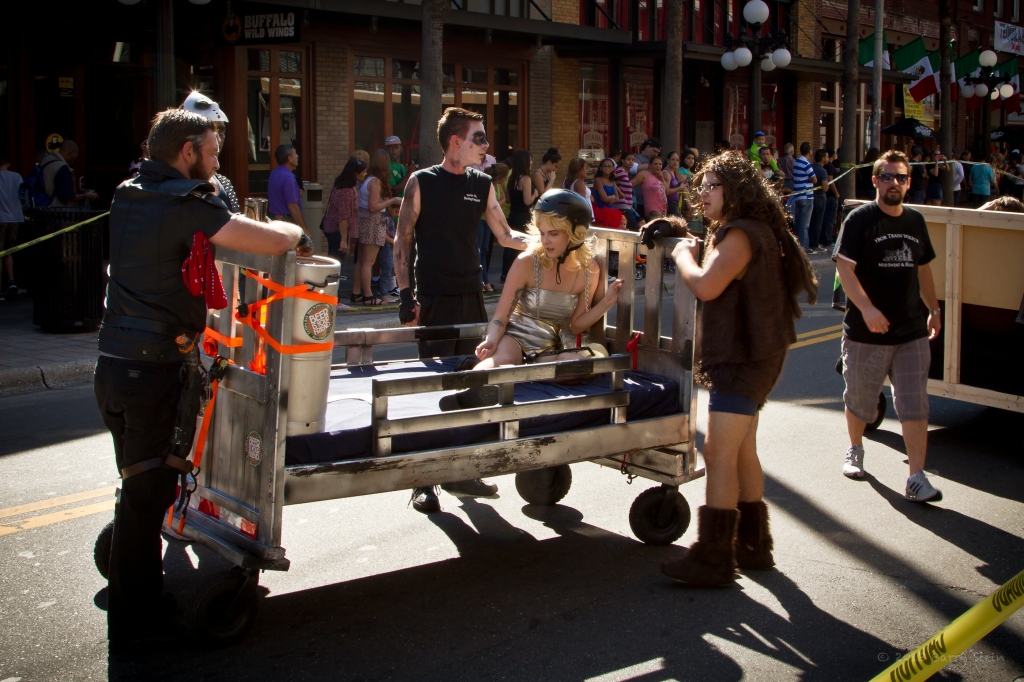 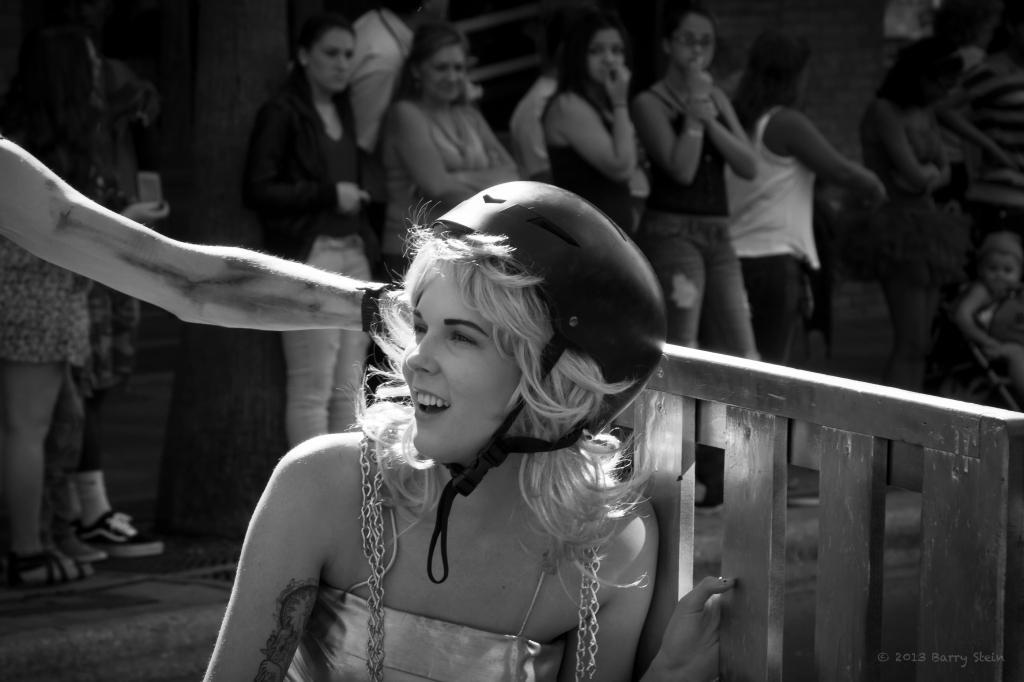 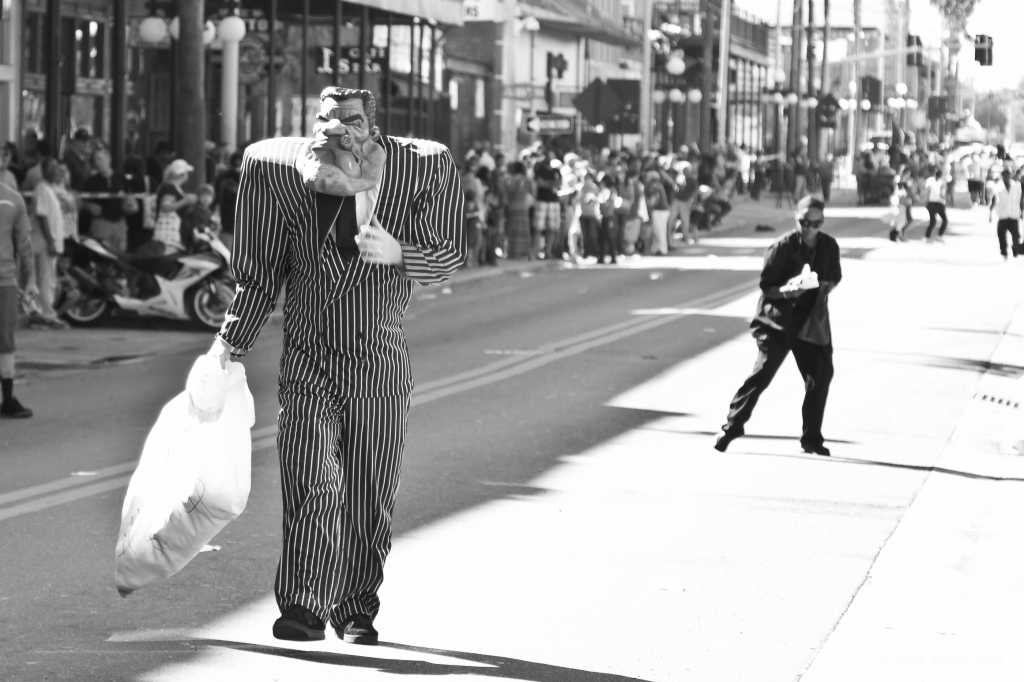 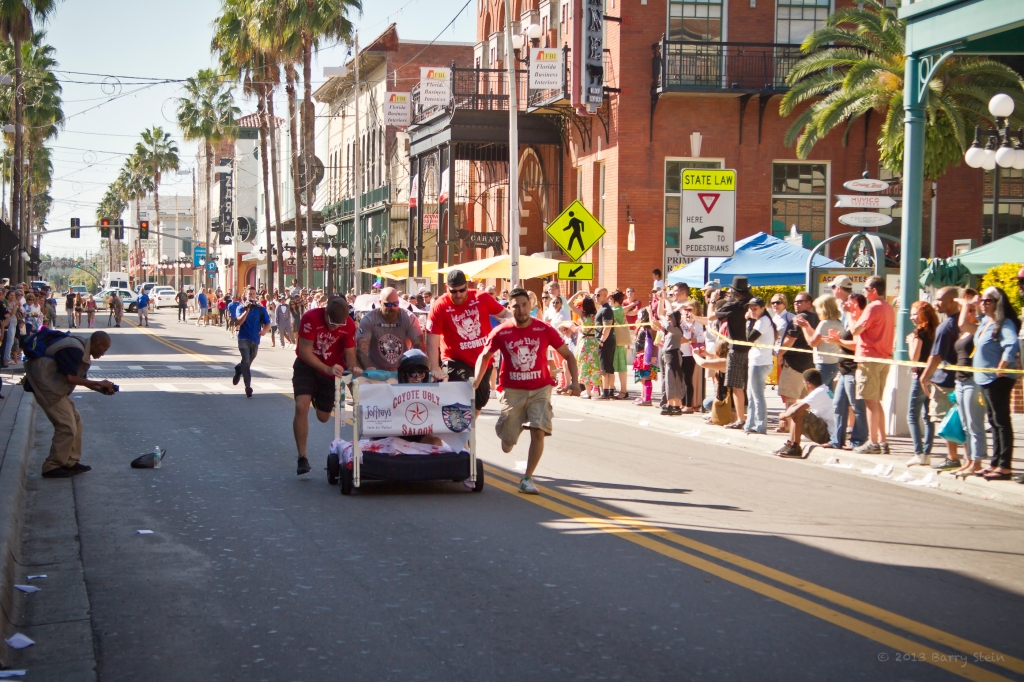