WAKE AND WALK ON

Sometimes I wonder what get’s people up in the morning. What and who do they have to live for, work for and walk on through their day for? Are they in the majority who does whatever they can to pay the bills only to wake up the next day to do it all again; or is there something more to it?

This past weekend I stopped by my favorite Italian Market. Here, everyone wakes up super early to rush in. They could be bakers excited to make a giant cake that looks like a cheeseburger or just the patrons who eagerly wait in line for the doors to open so they can rush in like little kids to get their favorite seat at the coffee bar.

If you are an infant, chances are you don’t have any of these thoughts. Like a flower that turns toward the sun as it dawns, you just simply wake, feel  hungry and make noise to be fed. If you are an amazing parent, you get up in the morning and your whole life exists for the care and feeding of your infant.

If you’re like me, you might get up in the morning with the hopes of finding just one good shot… maybe freezing time at that exact moment when a baby’s face sees you just as you press the shutter.

I used to be a biker. I’d get up early, pack up the bike, the one-man tent with moon roof, the tightly wound sleeping bag, gloves, helmet and a little book to write in when I’d make my stops to ponder the mysteries of the universe. We used to have saying back then, “…there are two kinds of people in the world, those that ride Harleys and those that wish they rode Harleys.” That is … till I learned about Ducatis.

On this morning, the Ducati team was out looking to tease those of us who wish to move fast and look Italian. Now, if that doesn’t get you up in the morning, nothing will.

Elsewhere in the world the paperboy gets up at the crack of dawn to ride his or her bike and deliver the morning rag. With the economy shifting the way it has, grown adults deliver papers on huge routes in noisy cars driving down the wrong side of the street, too early for anyone to notice.

Public markets assemble and a wannabe reporter gets assigned the task of sitting in the booth to hawk the papers. The sun rises and shines through the trees and catches her in the moment of her secret lipstick pose. This may not be what she would like to get up in the morning to do… but she does it anyway.

On another part of the street, a white girl gets up in the morning excited to share her views on the injustices against the African community. Another rises exited to ride her bike, another rises to debate the issues from his wheel chair and yet another might rise for no reason at all only to discover his purpose on this very day.

Meanwhile in a completely different part of down from where minorities are capturing champions, a little antique store opens and greets early shoppers who get up early in search of the rare and unusual. In the same moment as one wakes to fight prejudice another rises to profit from it.

One time long ago, I had a conversation with my aunt who ignited my metaphysical thoughts and possibly spawned my existential angst. She used to say, “… life is very simple. We’re born, we stick around a while, we make stuff then we die. Enjoy yourself as much as possible because we are all just here for a few short moments in time.” 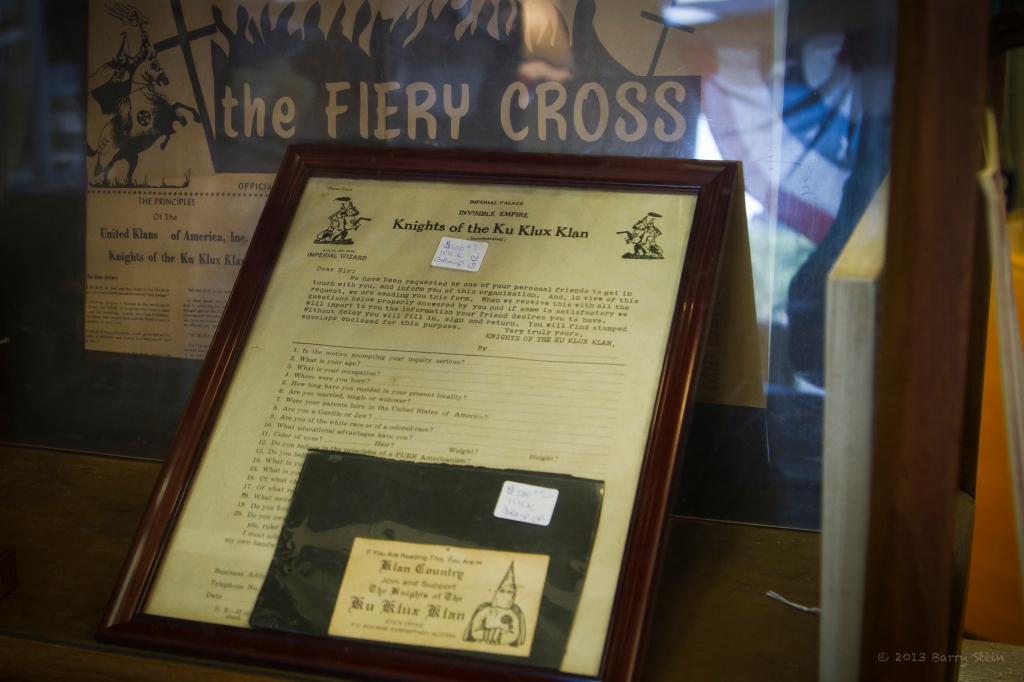 Outside the store selling the KKK paraphernalia was a little French Bull Dog without a collar. He just stood there and stared at me as if he was trying to deliver a message to me through his eyes. I stared back and waited for the transmission to complete.

Then all of a sudden….

… it was time for me to get home to the reason I get up every morning.

She waits quietly till I depart my slumber and arrive at the next day. Somehow she knows I’m awake even if I don’t move or change breathing or change position… she knows. She raises her paw and says, “Come on… get up… it’s Saturday and I have to go pee.”

On this day, this is what get’s me up in the morning. The chance at capturing one good photo and the care and feeding of one good dog.

4 thoughts on “WAKE AND WALK ON”