The first thing I tell many of my clients when they think about naming their business or a new product is that it should say what the business does. Always write that out in detail and then once the function is out-of-the-way and validated, then we can get into the business of being creative.

I stopped by a business this past weekend that had no name. Its name and sign that goes out each Saturday morning is the same as it’s been for years. When you talk about it to someone else, you refer to it as “that place that sells everything… you know on that road with the name I can’t remember.” 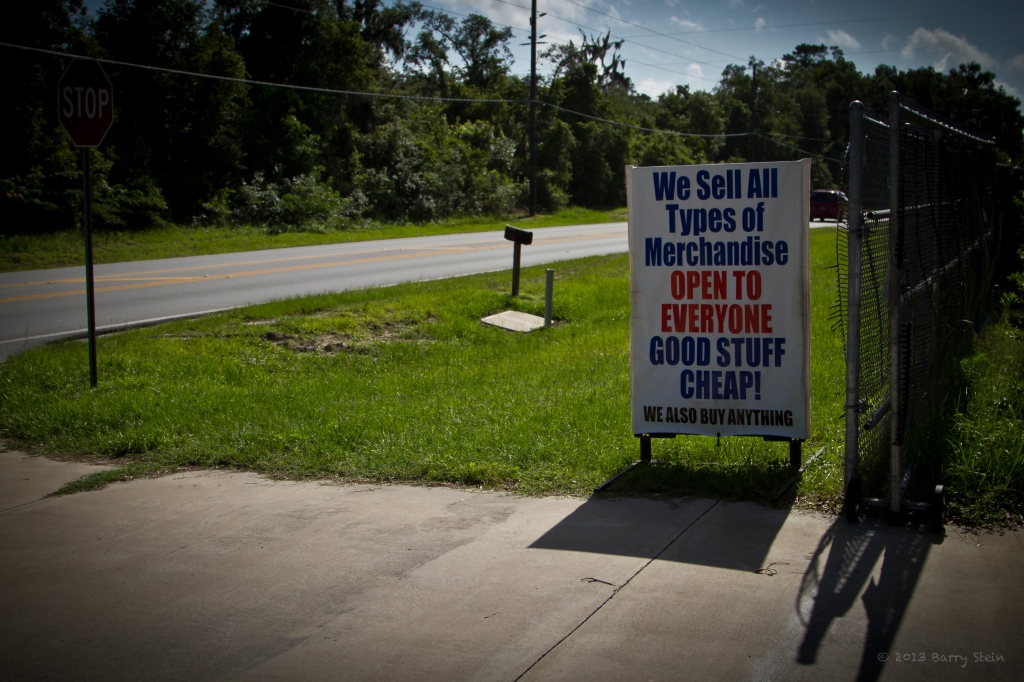 Not the best place to wander around in flip-flops… I saw all their good stuff cheap and got my toes and ankles eaten off by tiny baby mosquitos and little biting fire ants. As I stood in front of the Fire Extinguisher display, between shooting the shot and scratching my feet, I wondered if the spray from those extinguishers could also douse fire bugs nibbling on my bare feet.

I went into overload from all the junk and crap piled all over the place. The credo of one man’s junk being another man’s treasure was alive and well before my eyes. Every imaginable pile of this and box of that was there for the taking. I wasn’t even sure how things were organized even if I did come there with the intention of buying.

Pretty soon it all just became a mushy mess of colors and shapes to me. Piles and stacks and racks of junk. Boxes and bins of screws and nuts and bolts. It all became collections of patterns of light and dark, shiny and rough, round and flat. 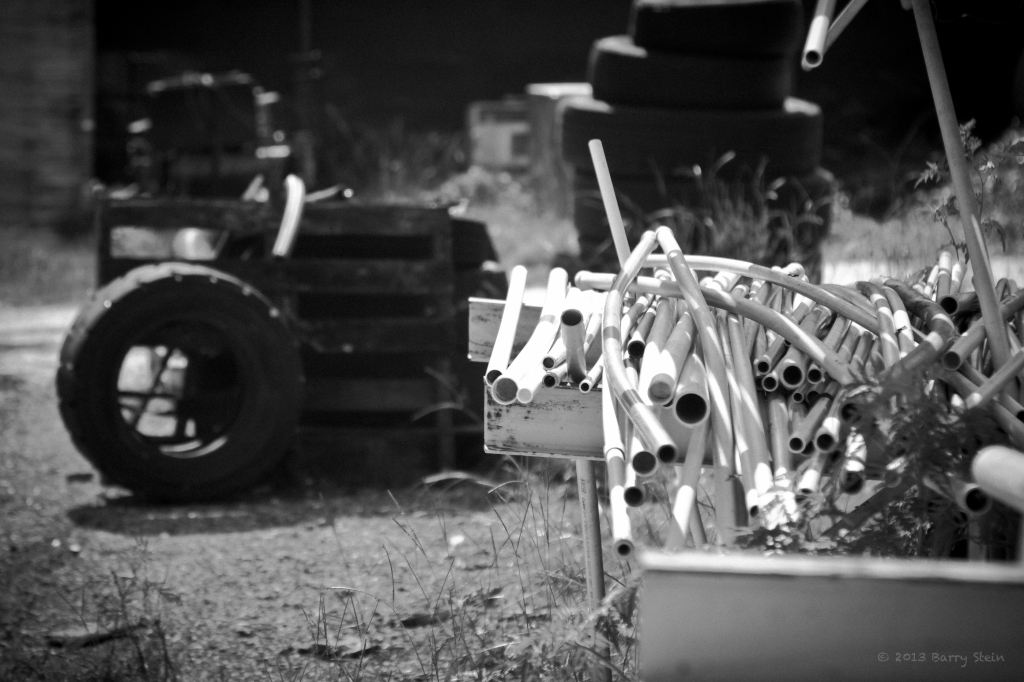 It wasn’t long before I had no more skin left on my feet that had not been bitten, the sun had cooked me to a nauseous, “get out of there” state and once again I doubted my purpose at this place. So I left in search of a sign that would tell me I was in the right place at the right time. It seemed like I drove for an eternity before I arrived in the palms of fate’s hands.

By this time I was completely lost and had no idea where I was. Dueling banjos played in my mind as I had lost all landmarks other than endless cattle pastures, dry roads and bible billboards. I turned left than right, two rights and a left. Came to a stop sign and a car drove past me with a woman wearing a cowboy hat.

I sat at that sign and pondered as another pick-up truck passed with a bearded man driving, also with a cowboy hat. A few more cars and trucks later also carrying cowboys was enough to say to me… “follow those cars” and I did. The caravan made all kinds of convoluted turns till they entered an unmarked entry way on a long stretch of highway. I followed them in.

At least a mile and a half down a dirt road that twisted and turned and suddenly a parking lot appeared, “BANG! … BANG BANG!” Apparently I had followed this crowd to a shooting range and there was some kind of cowboy tournament going on! They had their guns and I had my camera. We all stepped out of our cars ready to shoot. 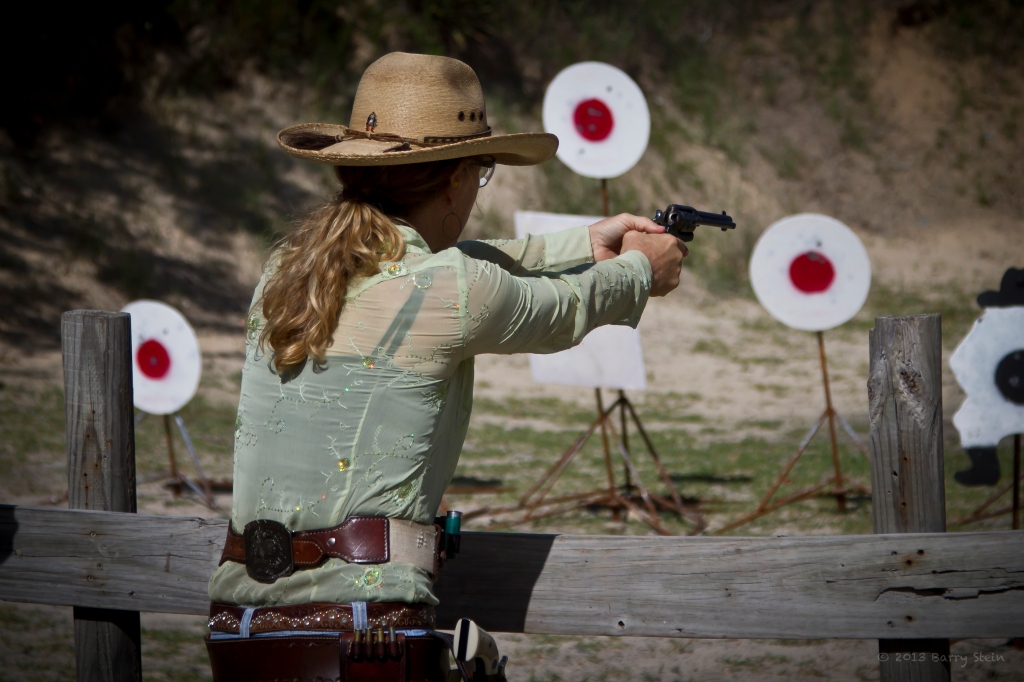 Now granted… this was a bit of Disneyland with them all dressed up in formal garb. And it was just that section that I followed them to that had the Cowboy Shoot Off; as there were other sections where the more serious snipers and soldiers of fortune practiced. But at this section, it seemed more about the dramatic re-creation of the old west.

They were all really safe with their weapons. Nothing was loaded unless it was ready to shoot, spotters watched for potential hazards, hot shell casings were picked up with long pincers and everyone moved cautiously with safety being the most important practice aside from hitting the targets in the best time.

I watched and waited to get the best shots of the expended cartridges discharged from the guns, dancing up into the air like twirling acrobatic missiles doing back flips. There were the old guys who moseyed up to the shooting line and the young girls and middle-aged wide wasted fellas who bellied up to the bar.

Great contests of shooting through make-believe windows and busting into make-believe saloons. It seemed fun to me to watch and then I started to think a bit more about the weapons.

Some of the chaps wore their six shooters like they had been born with them on. They’d stand posed with one boot clad leg forward and one bullet belted hip back one hand on their gun and the other on their belt buckle. Their hats tipped to shield their faces from the sun and onlooker recognition.

Like walking into the Wilson Leather store in the mall, you could smell the polished leather wafting off their sweaty gun belts. I continued to think about the gun. The great equalizer. The weapon of destruction and the keeper of protection. 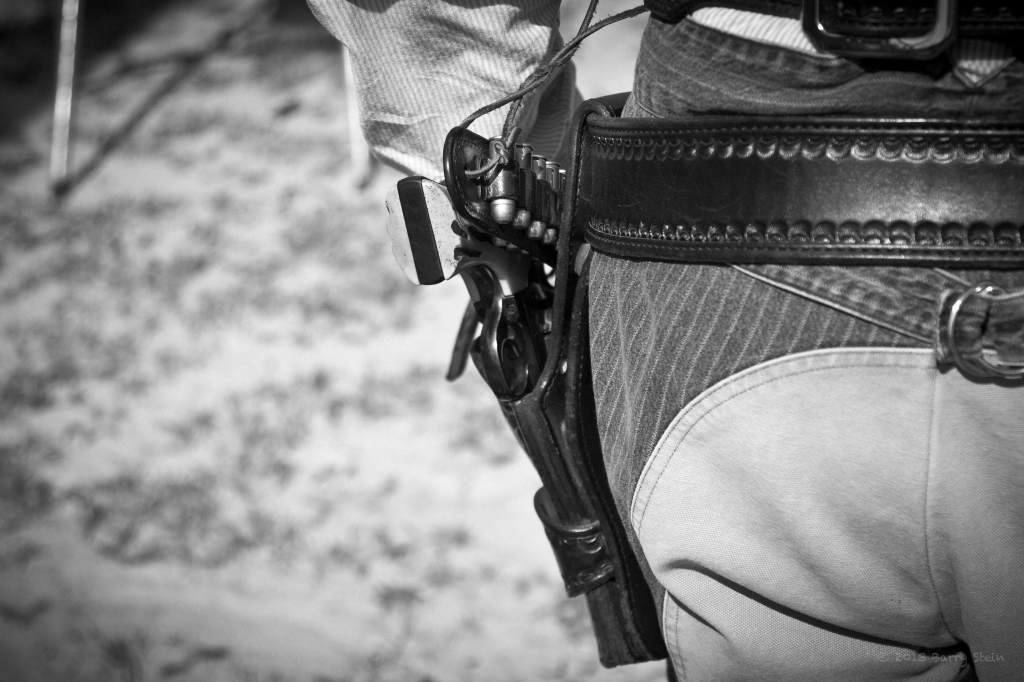 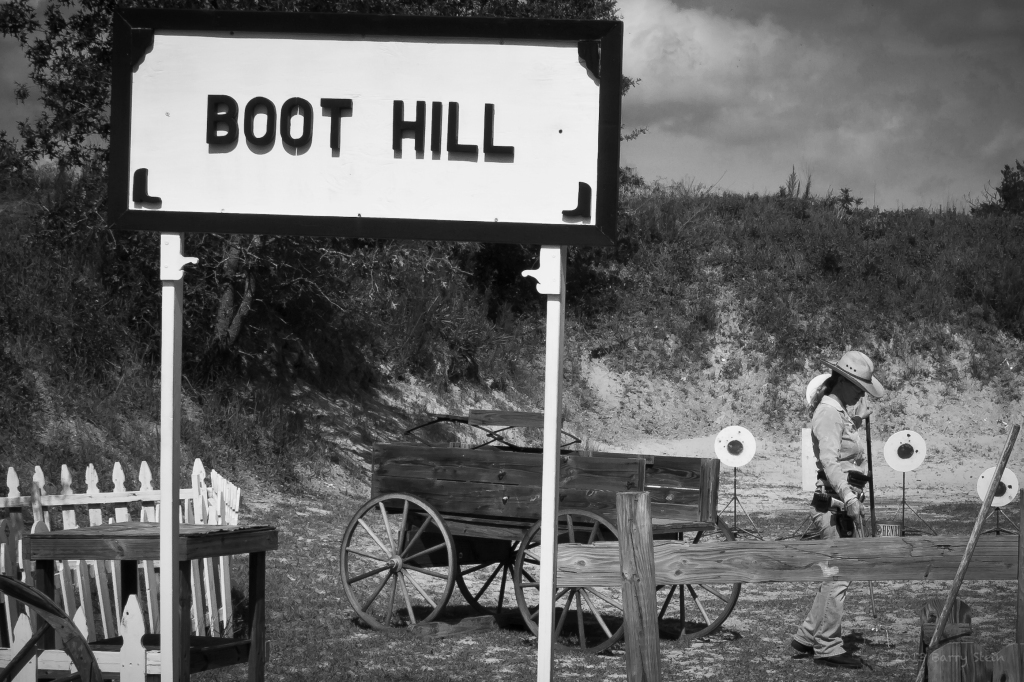 I suppose it depends on where one is coming from about this whole issue. If you’ve ever been robbed and had a gun pointed in your face, chances are you would not feel comfortable around guns. If you knew of someone who had lost their lives violently and unnecessarily as a result of a gun, perhaps the overall topic of fire arms would cause resentment.

If you come from a martial arts or philosophical samurai background, perhaps you wouldn’t even notice the gun at all in all your attention would be on the person carrying it. The gun is not the object of fear, it’s the person holding it that needs to be known.

I wandered over to the next range where the long-range shooters were out in the field examining their targets. They had left their weapons unattended. As I floated in like a silent ghost with my camera, the fans overhead twirled like how I would imagine a Huey Chopper would sound while swooping down to land in some war-torn clearing.

With all the shooters down at the end of the firing range I could marvel at their equipment without interruption. The amazing detail of the leveling pads, the shiny bullets in the tray, the soft leather molded bags and the way they either named their rifle or put their own name on the accessories.

At the next section of shooters, I watched the marksmen in the shadows silhouetted by the bright sun behind them. I didn’t feel threatened by them. I imagined some war being fought on my soil and the horrific foul of any type of atrocity be falling my loved ones. In the midst of the stench of this horrible thought, I found myself wanting to be able to defend myself or be with one of these men or women who could protect me.

The loudest crack imaginable left painful ringing in my ears, spent gun powder filled the air like burnt eggs after the fourth of July. I decided to leave the nest of snipers next to the swarm of soldiers and return to the law and order of the cowboy contenders, my home on the range.

I saw myself a bit more like this fellow below. Shaded by the sun with my matching ensemble of artistic glasses, straw hat and a designer striped shirt. I too would have a bit larger of a belt size and my cooler handy for refreshments to drink and share. I left the serious shooters and returned to the more playful cowboys and cowgirls. 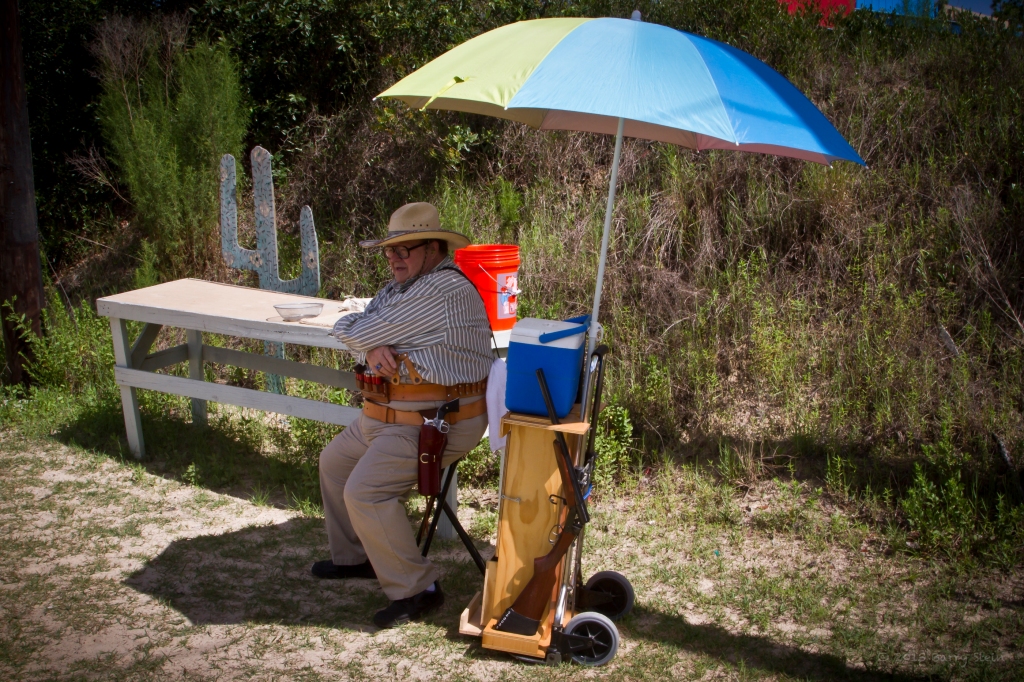 Then my mind shifted and lost its perspective of time. I saw them all as wearing side arms with as much casual probability then we would have in this modern-day, each of us armed with a cell phone and ready to shoot a mobile photo. Everyone wore a gun back then and anyone that didn’t looked like they were missing something.

It was time to go. I was hot and eager to see if I caught any good shots with the bullets flying out of the carbine repeater rifles. That’s all it was to me was capturing action shots of objects flying through the air. As I drove home I thought more about guns and how they are both the good and the evil. I thought about fire and how it is both burning destroyer of lives and warming savior from the cold.

I thought about this story I heard about this women who was a breast model. She worked for a plastic surgeon and her job was to show her breasts to prospective patients who might want breast implants. She was a walking portfolio for the surgeon who performed the procedure.

She bears her breasts for all to see in brochures and websites to demonstrate medical proficiency and professional credibility. Then I wondered about the difference of seeing her portfolio breasts on a website vs. seeing another women’s pornographic breasts on a different website. What makes which right?

Then I remembered this story about a salesmen who showed me a real $100 bill and right next to it, he showed me a $100 bill taken from a Monopoly game. He asked me what the difference was between the two, positing that they were both identical being that they both were identical in a way… just ink on paper.

Hero or villain. Protector or provoker. Portfolio or pornography. Junk or treasure. 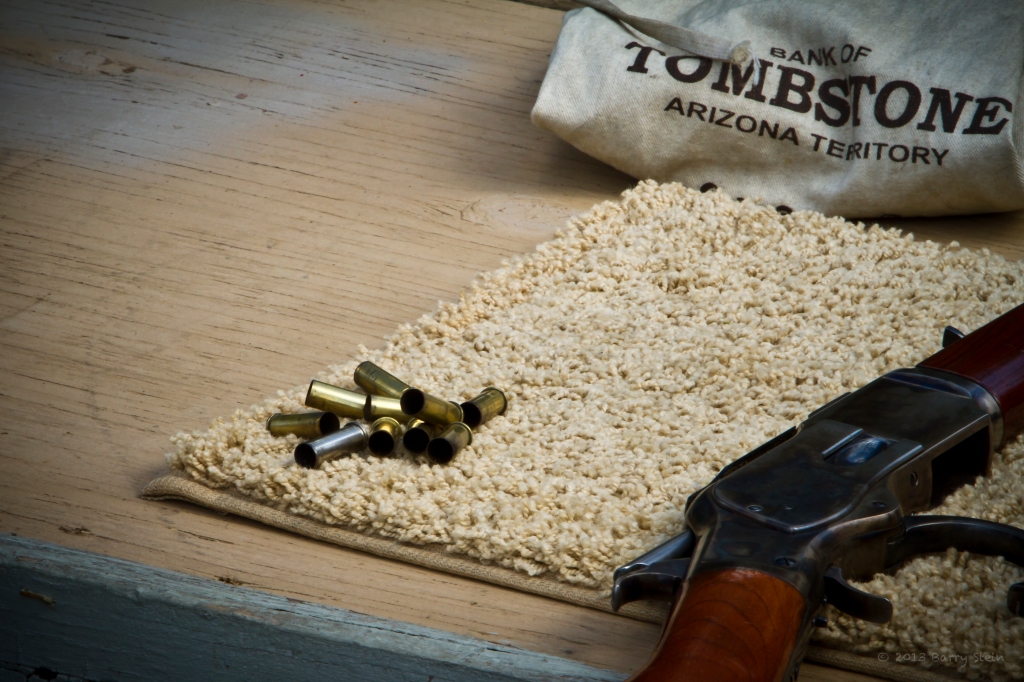 8 thoughts on “BARE FEET AND ARMS”