Last night I pulled into a gas station to buy a pack of gum. I parked next to an old used Jaguar. The owner of which was exiting as I was entering the convenience store. He was a pleasant balding man, 70s, soft and kind. We chatted a bit about his used vehicle.

It was plain, basic silver, had some wood burl on the dash but the headliner was falling down and the seats showed the wear of many users over much time. I pondered about how such beauty and luxury had its appeal when it was brand new and how in its distressed and weathered state also has appeal but just a different kind of desire.

I don’t think it’s about comparable value of new vs. old. I think new is virgin and fresh and seasoned caries the wear and scars of untold stories and a unique acquired beauty that can only come from age. Some prefer the shiny new lamp while others prefer the patina on their precious metals.

All day yesterday, I was presented with beauty and shine as people and nature fluttered their tail feathers like strutting peacocks. Yesterday morning I visited the public market where people showed their wares. It all started with this young fellow on a street corner playing the harmonica and singing songs from the 70s.

I had a flash of a vision of a harmonica collection on someone’s dresser and a make-shift totem pole covered with corks from every bottle of wine ever consumed. Each cork had someones name on it as a reminder of conversations had and memories made.

How many instruments can one man play at once? I had a vision of a person unable to make up their mind because the choice of one thing meant the loss of another. Who’s to say that a choice even needs to made? Some people are just walking orchestras waiting to be heard in concert while others are just sole instruments looking for harmony, trying to be perfected. 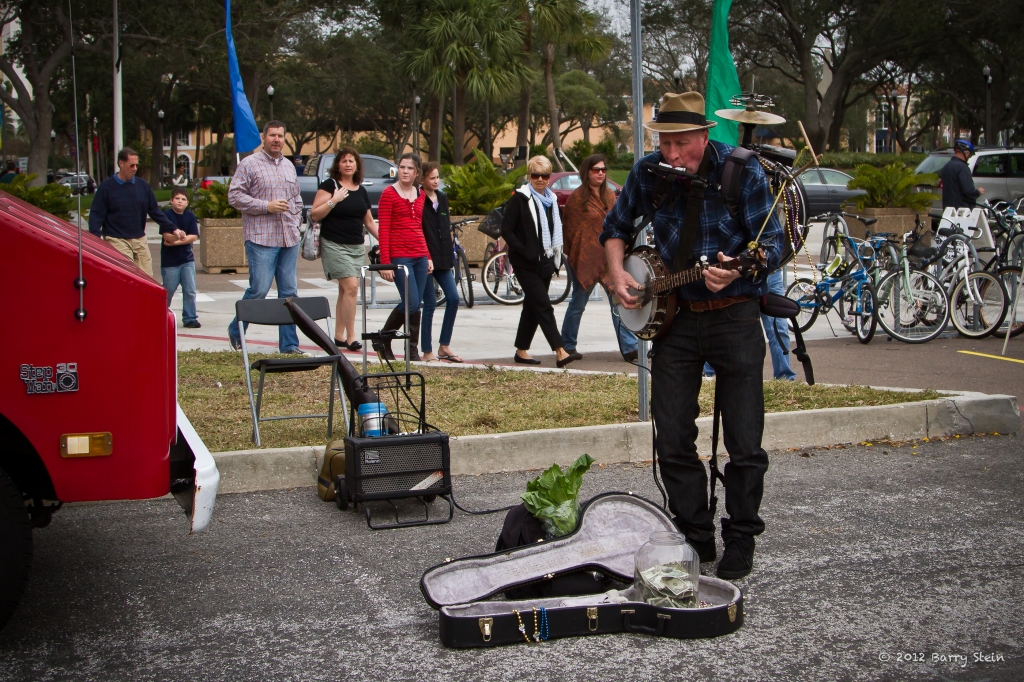 Some learn from others while some teach themselves. Why an Accordian? I remember thinking… If one could choose a package, why would they choose that one? We make choices in context at that time. We may forget all the intuition and logic applied to the great decisions of past, but if we could recreate the reasoning we would probably do it all the same.

This Lenny Kravitz/Bob Marley looking dude thinking… “I’ll go with the German squeeze box” is no different from the Hasidic Jew that chose to be a Reggae Rap Singer. No explanation. Others looking at us from within their view sometimes cannot conceive of another world of choices. 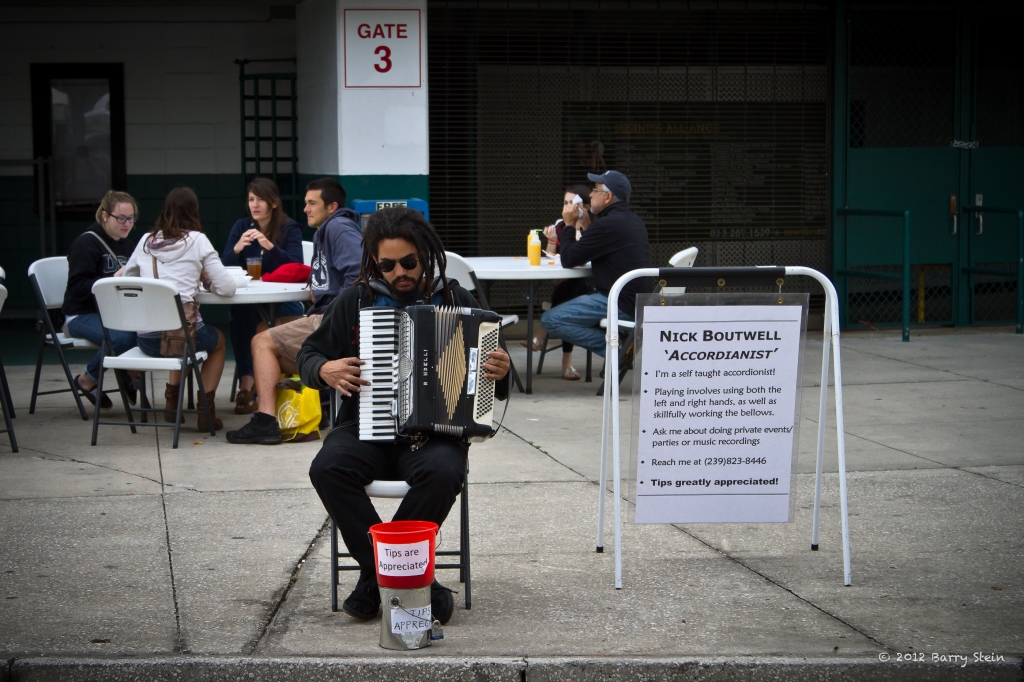 And how we behave should be appropriate to who? If we are in our 90s and we feel like dancing, smiling and dressing up… rock on sistah I say! I had visions of a woman in her youth. She was so extraordinarily beautiful that each who met her was compelled to take her photograph because her face was so perfect.

Wealthy men on the edge of insanity, competed for her attention and eventually won it. They tried to contain her and control her and make her their possession but she would not be managed, she could not abandon the wild spirit that drove her. Each time she left a keeper, she would rebuild her self-expression and make her feathers even brighter.

On this Saturday, she felt like dancing in front of a crowd and no one could stop her.

Elsewhere, a woman is honored for her individuality. A man finds her, becomes seduced by her single vision of baking cakes, cookies and pies and jumps on her narcissistic bandwagon. Now they both see the world as she does. To him no one is more beautiful and to him no dessert could compare to her precious creations.

I bought a blueberry muffin from them and after quickly consuming it as a result of his passion for her and his flamboyant sales job of her tastes and talent… I promptly got heartburn. The destination of one man’s life search is another man’s indigestion.

At another booth a woman sold strawberries. She shouted to the crowd how her berries were the real berries and all others were inferior because they are refrigerated or stored or mutated somehow. It seemed like a bizarre church revival in front of her booth as one woman after another reached over, took a berry, bit into it and started testifying to Jesus.

“Oh Lord! You must have had made each of these Strawberries for they are truly amazing!” one woman shouted. Then another lady came over and bit into one and she just started moaning and jumping up and down in a fit of pleasure. I imagined all these ladies having their marketing meeting the night before. It was probably a bit like how a flash mob would plan their dance.

I didn’t taste them but I was taken with how each and every one of them looked absolutely perfect.

A few booths over, some flowers were sitting in buckets of water and being sold with vigor. The mystique of the Sunflower. I had visions of nude women showering in their back yards while blasting Bonnie Rait, Sade or Natalie Merchant just because they could.

Every time I see a Sunflower I think of beautiful bra-less hippie women without make-up. Their faces framed by tattered hair, their strong worn hands tipped by de-clawed rough knuckled fingers. Salad eating bodies wrapped in matted shawls, while driving VW vans, smoking something, gabbing impulsively as they stop on random roads to rescue gently used furniture that has been kicked to the curb.

And for every lovely natural woman there are the lone androgynous soldiers who look best in black and white.

Somewhere in the middle of the day a made a quick stop at the beach… just because I could. It was a cold, dark and cloudy day overall but there is something about walking near the water as the breeze washes your mind clean of anything that is lacking. On these kinds of days when there is no yellow sun or blue sky, one feels like they’ve stepped into a black and white landscape.

There might be a pop of color here or there but mostly it’s all just gentle hues of gray.