So, it’s the holiday season. I’ve been so busy shooting family and friends that I haven’t had a chance to go on any magical mystery tours and submit to the psychic drift…. till yesterday.

I guess the way to break into the story is to touch on a stop I made in Atlanta over Christmas, to visit my daughter. She took me to an awesome Mexican Restaurant called Nuevo Laredo… I highly recommend it. As we were all leaving, other folks there were documenting their memories as well.

As a group of women lined up for a shot by their one lone male companion, I got behind him and took one too. I’m including it because I was a complete stranger to them and while almost all the women posed toward the man they knew, the prettiest one was looking at me.

I continue to marvel over how most people are always looking one way except for the rare bird that looks the other. Naturally, the rare bird will always see what the others miss. 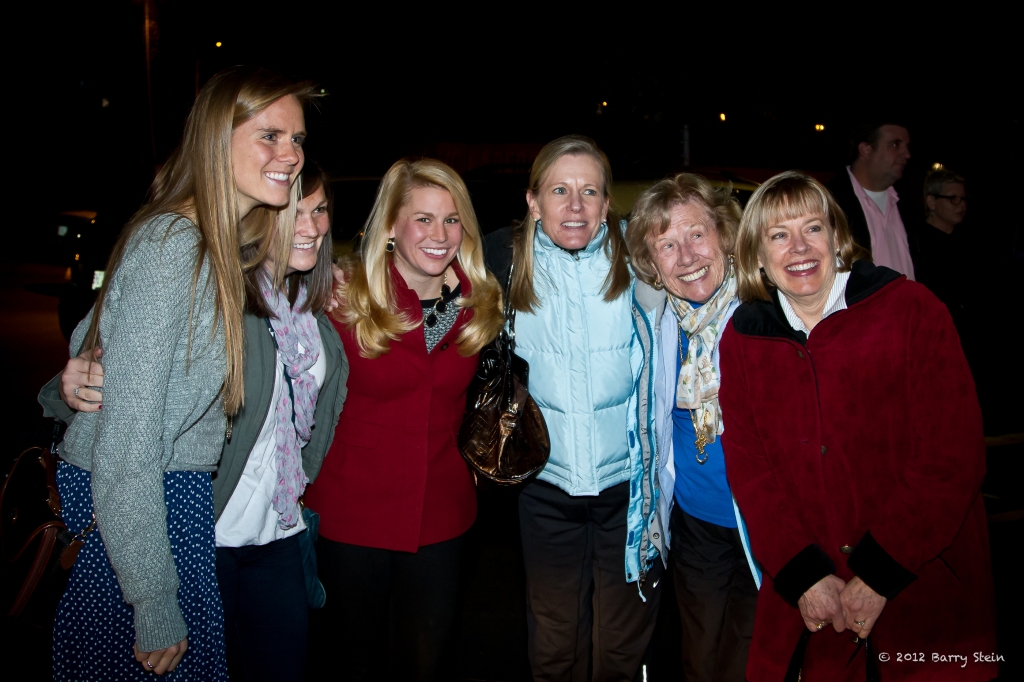 Yesterday, I finally got a chance to walk. It was a beautiful day in Tampa and I was trying to find the best place to wander. Trying to remember how to find the magic again. So much posing in contained spaces seemed to make my manifest button a little dusty. On the bright side I learned a few things about my camera, in those slower controlled settings.

I found a sweet setting to capture a wider set of focus and I also forced myself to learn how to take better action shots. I was so frustrated with myself a few weeks back when I missed all those great shots at the Skateboard Park. All that stuff swimming around in my mind began to reconfigure the city and the view in front of me. I could feel me creating outside myself again.

I strolled the Tampa Market, shot a few people and buildings but didn’t feel the magic with the full force as I like it. 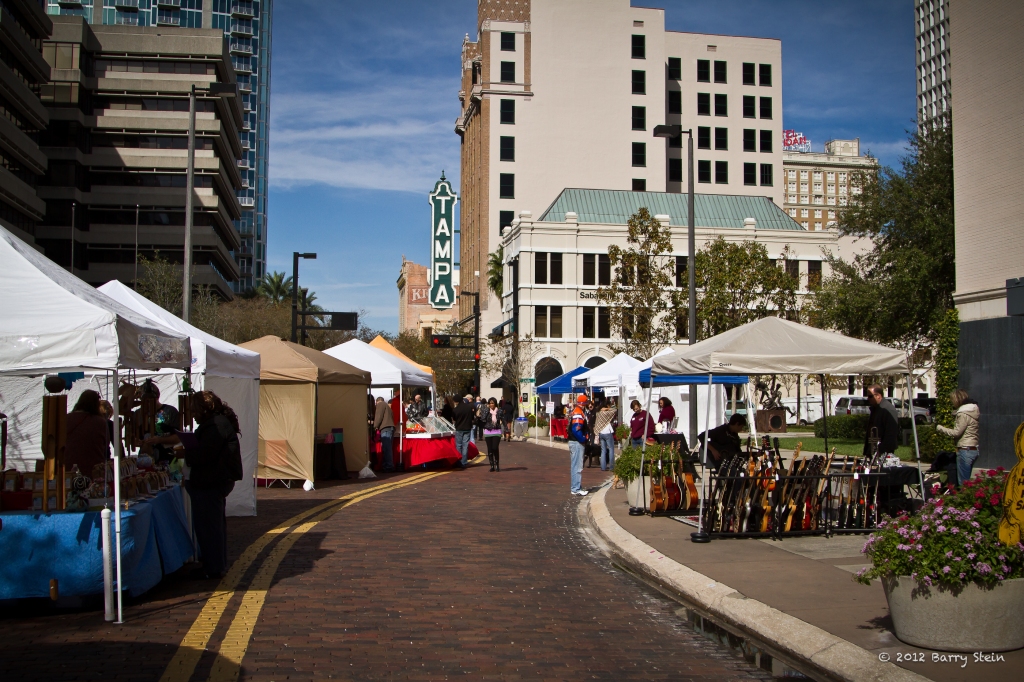 I found my way to the channel behind the photography museum that I will visit some day. My aversion to photo galleries and photo museums is a whole other story… but I found the water and began to follow it. I can’t really explain why we go in certain directions at random or why we look here and not there but I knew I had become adrift within a powerful wave of something. 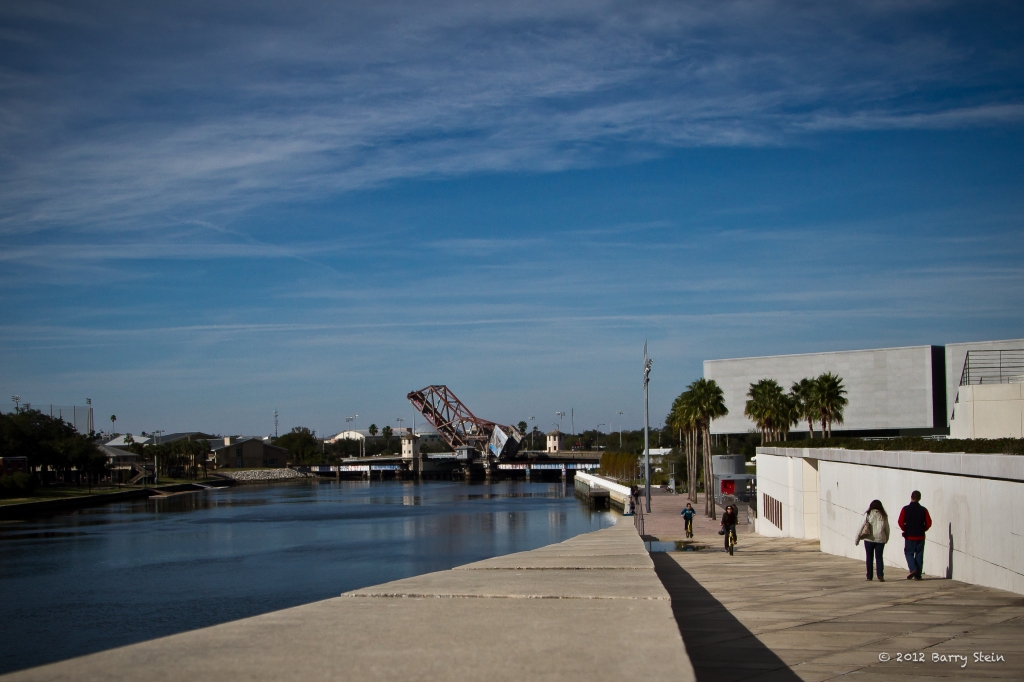 More stupid birds on a fence. I shot them. I had to shoot something. Which one should I focus on? Then, in the distance, some guy was just not where he should be. In my mind I fashioned a whole movie about me shooting birds and accidentally capturing someone I shouldn’t have. And they chased me and tried to kill me and blah blah blah… the A.D.D. kicked in and I kept walking. 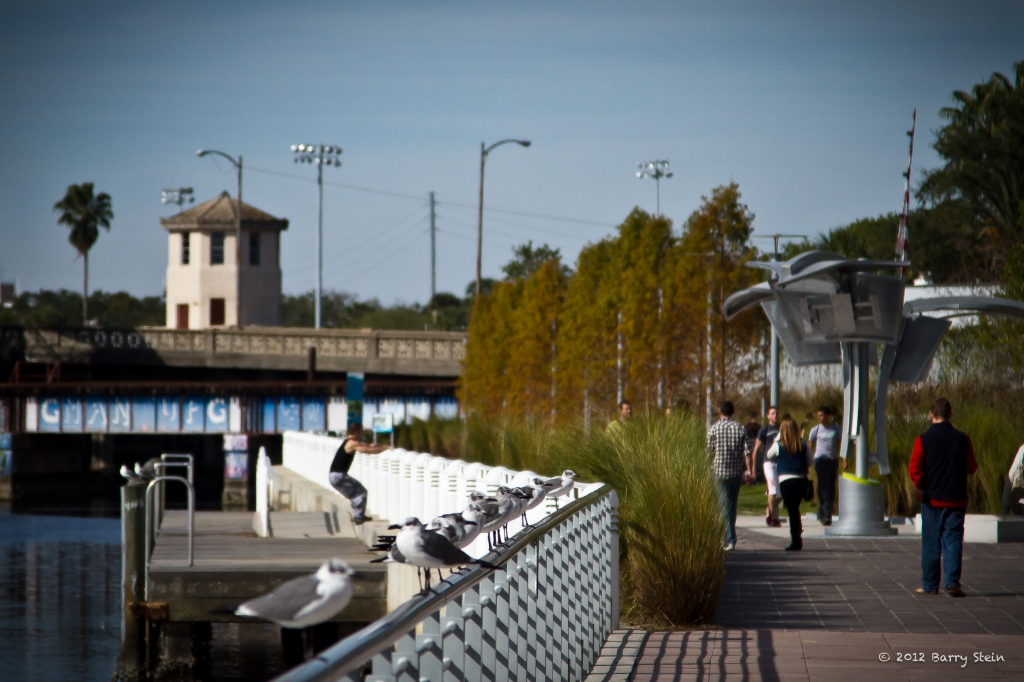 I hyper-focused on this one bird who just stood and posed. The light was perfect, the setting was perfect, the focus was perfect so I took the shot. How boring. I did start to think about what those birds think. The whole balancing act, the whole flying from place to place thing. The whole standing in groups showing off to each other, birds of a feather flock together thing. 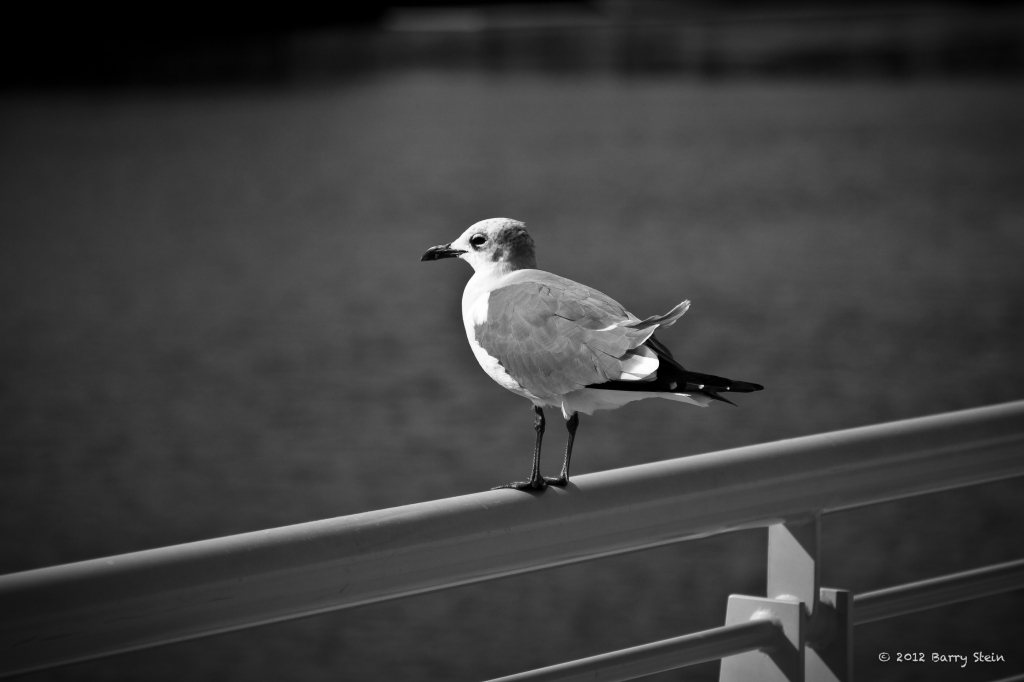 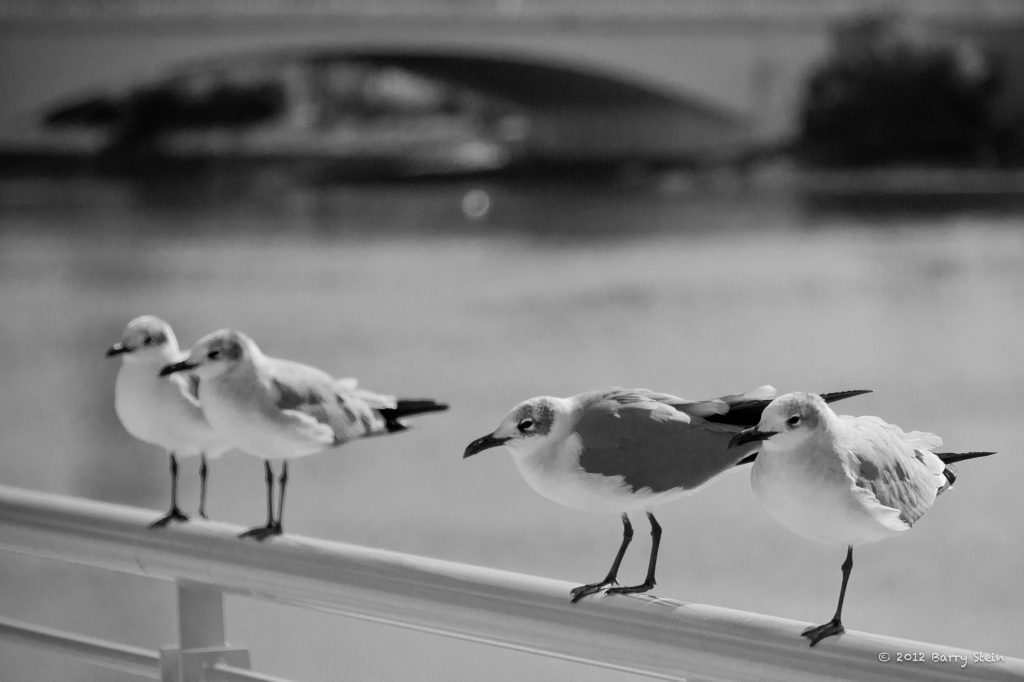 That’s when I over heard some guys behind me talking as they were walking. I looked behind me and they looked like that one lone cowboy who was jumping the fence in front of me a minute a go. Sneakers, workout pants, tank tops and massive muscles. They were kibbitzing about how what they do is different from what the others do.

I naturally followed them to where they were going, as they seemed to be walking with such purpose, enthusiasm and destination… unlike me. To my amazement, at the end of the channel walk was a dog park. The dog park was not filled with pooping pups… but filled with muscle-bound acrobats jumping and diving through the air like birds on the canine agility course.

With the camera set, my new knowledge of catching action shots and a dog park full of flying, leaping tricksters… I shot away. I had apparently stumbled onto a slew of Parkour prospects practicing their tricks. They seemed like gangs or clubs how they all band together as they flew and tumbled. 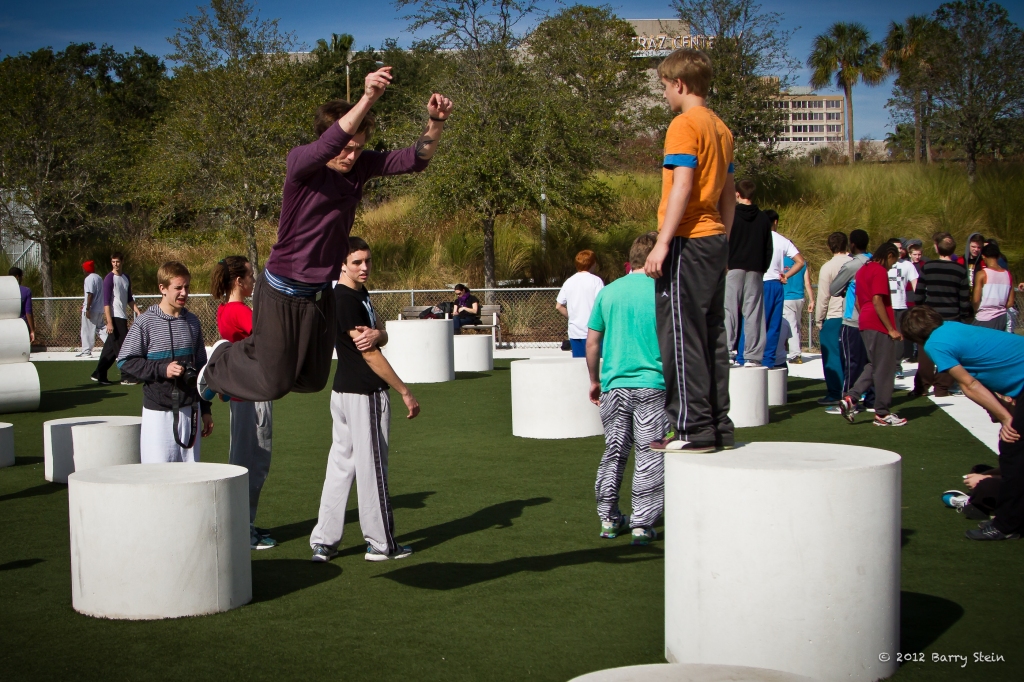 Each watching the other like birds of a feather. Each bettering the other with amazing flights, leaps,  rolls and twists. 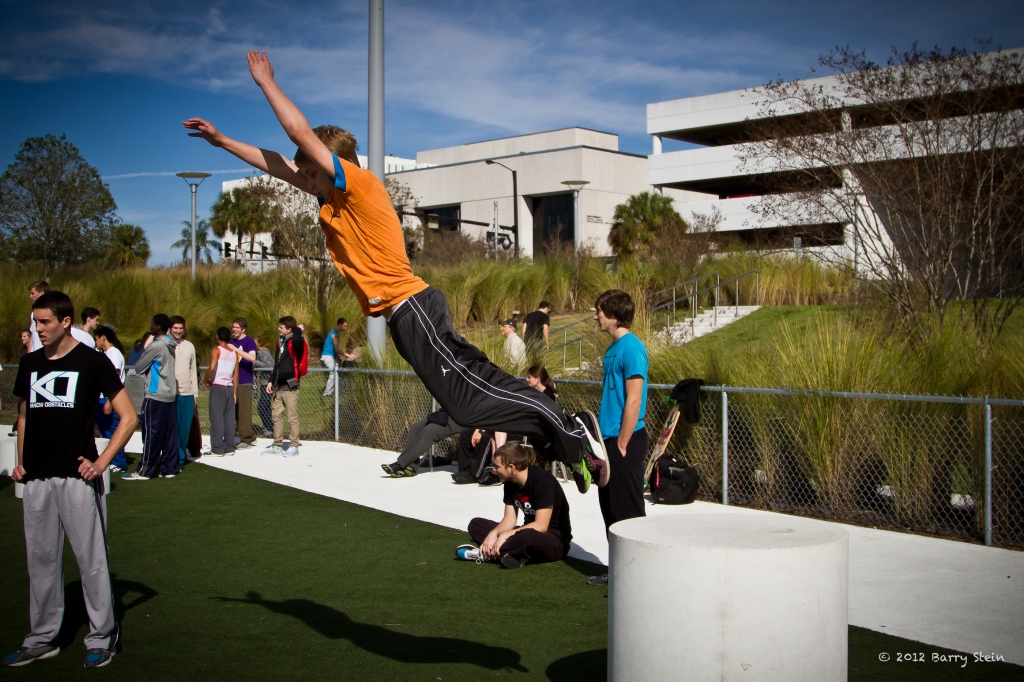 Some young, some old, some ripped and some just fearless. 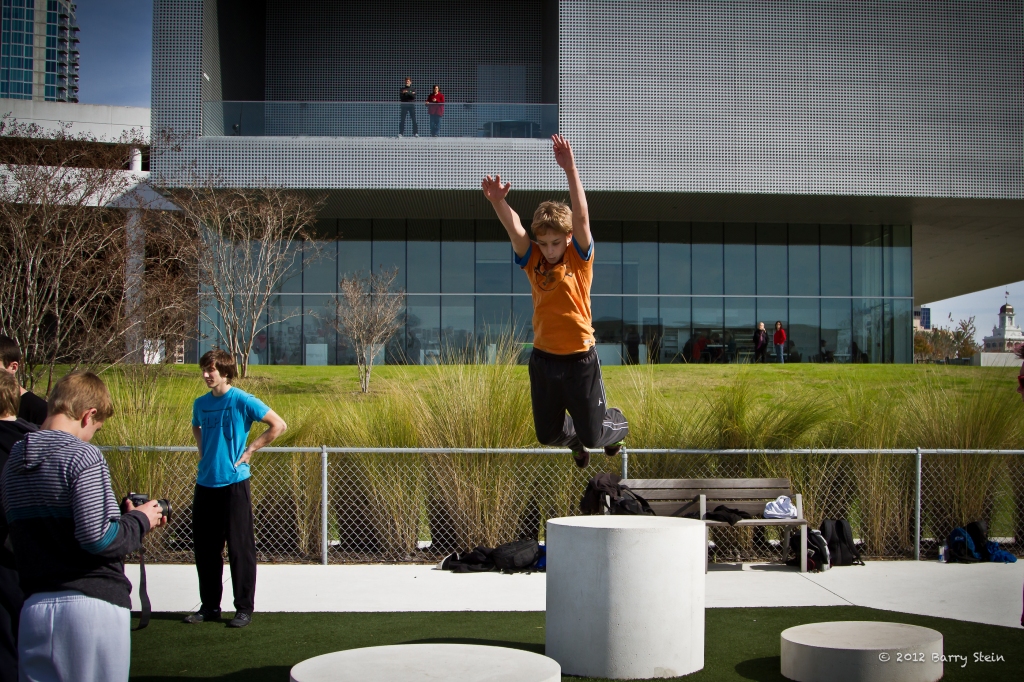 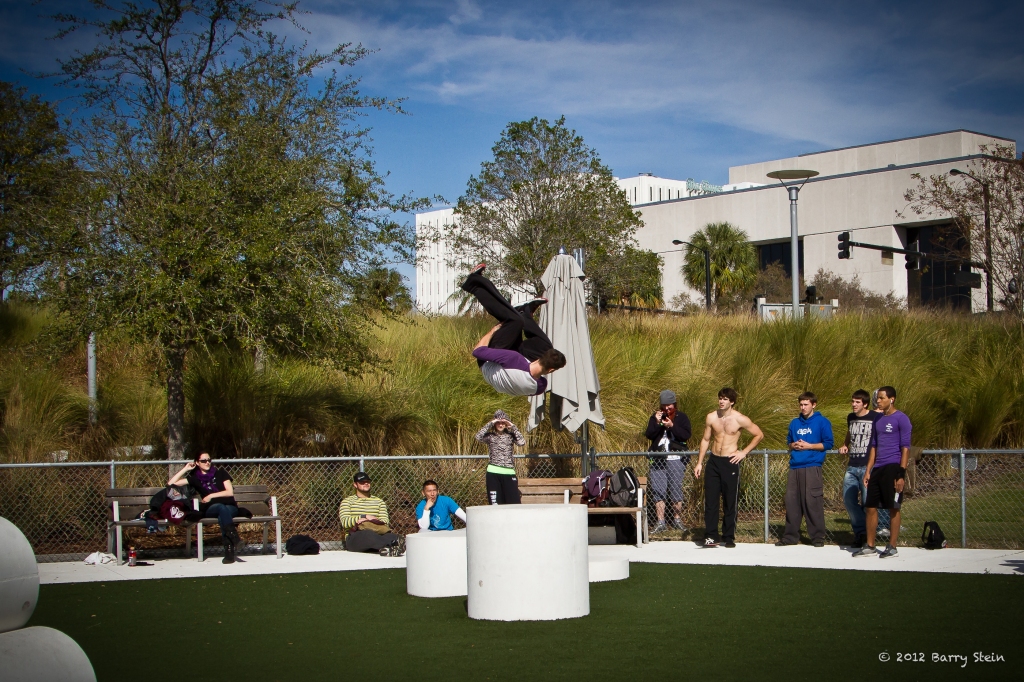 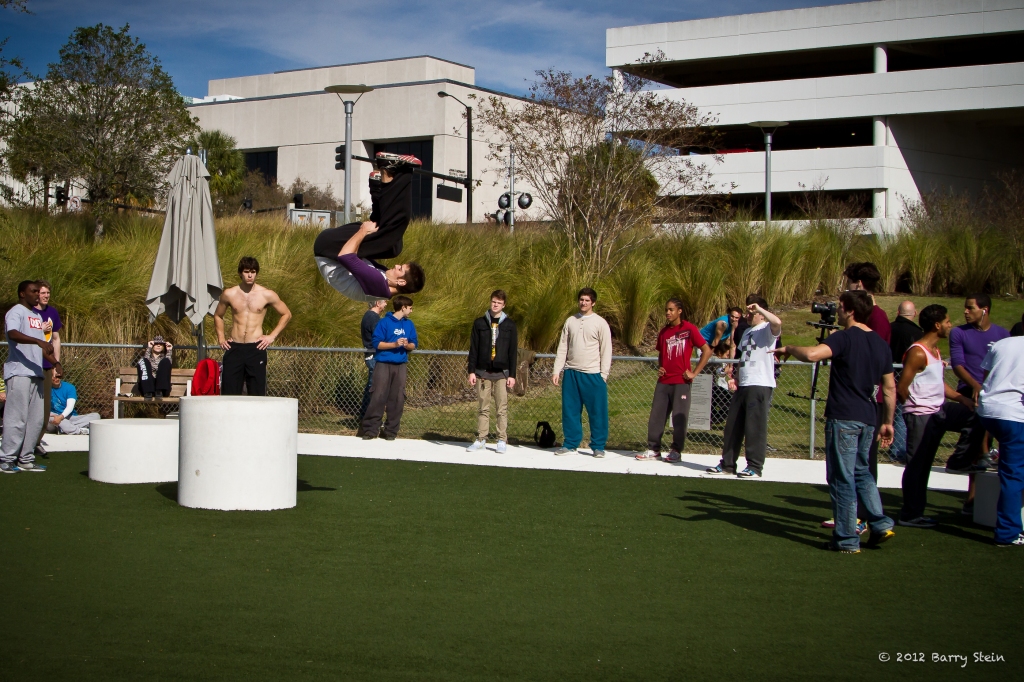 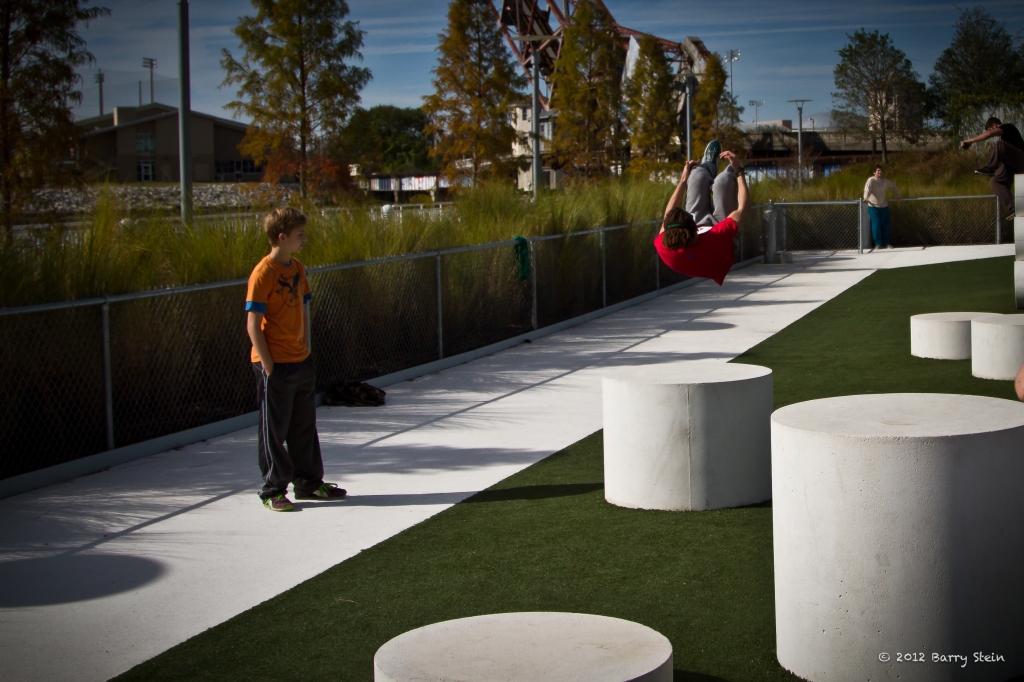 After shooting as much as they’d let me, they started to break up and disperse. It was like a scene out of the old movie “Warriors” where all the gangs went their separate ways… continuing to perform their tricks as they departed. I found one of the gangs flying between the fountains a block away from the dog park. 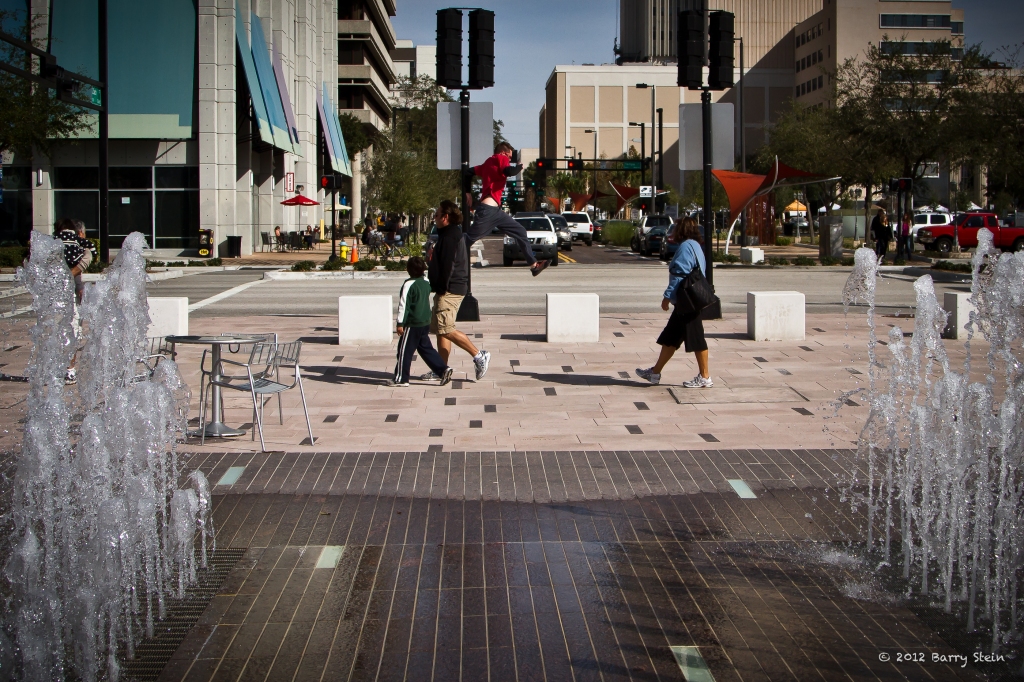 I didn’t know if I had captured any clear shots as I drove home. I thought I might have though. I smiled to myself thinking about how odd it was for me to stumble onto a random Parkour practice session. I remembered the first time I learned about this discipline of mixing gymnastics with martial arts.

It was long ago in a downtown movie theater deep in the heart of Manhattan. Alone wit da gangs of ethnic  crews, we all watched the release of the greatest Parkour movie ever filmed… District B13 by Luc Besson. I’ve included a clip from that movie… followed by a noisy rough compilation I pulled from YouTube. Enjoy.