There are times when we all lose our faith. We think that the way things are, is the way things will always be. We forget how minute our iota of control on the universe actually is and we begin to fight the intrusion of hopelessness. Alone in the world like the day we were born, we get busy and go places. We do things. We engage with others, trying to ignore how our mind continues to assert its worrisome purpose, and we just be.

On a Saturday, the local population converges on the public market. The best of the best and the worst of the worst, meet and mingle, walk and talk and all of us wonder if the others truly know what’s going on with us. We just keep buying soap, petting dogs and trying to dress fashionable.

My day started out like any other day. Knowing for sure I had nowhere to go, nothing to do, nothing to see much less shoot and I was positive nothing exceptional would happen. 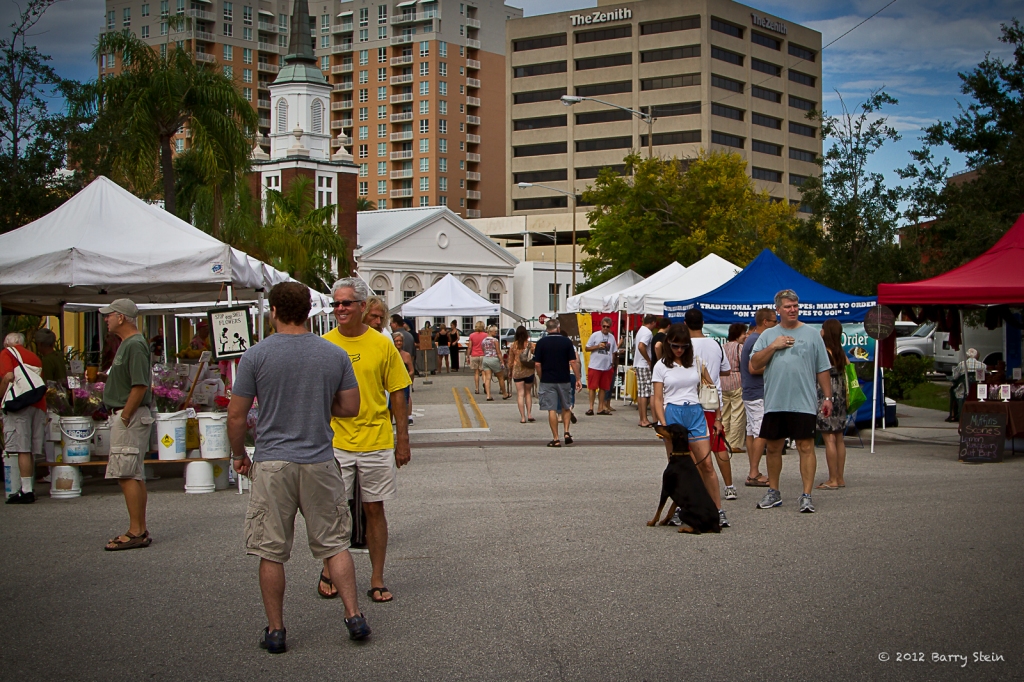 As I walked past the booth selling honey, I saw a giant bee fluttering around. I walked close enough to get a picture, but not so close that he would run out and sting me. 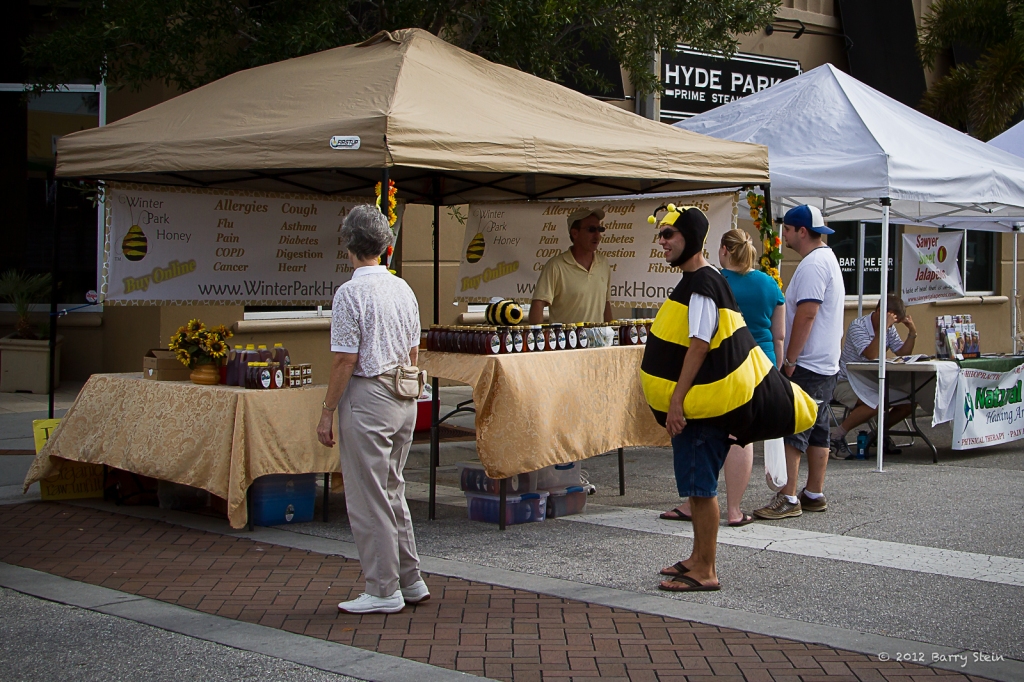 Then he fluttered off and rubbed his face and rolled his butt in this flower. Afterwards, he flew away. I’m assuming he went back to the hive to drop off his bundle of pollen. 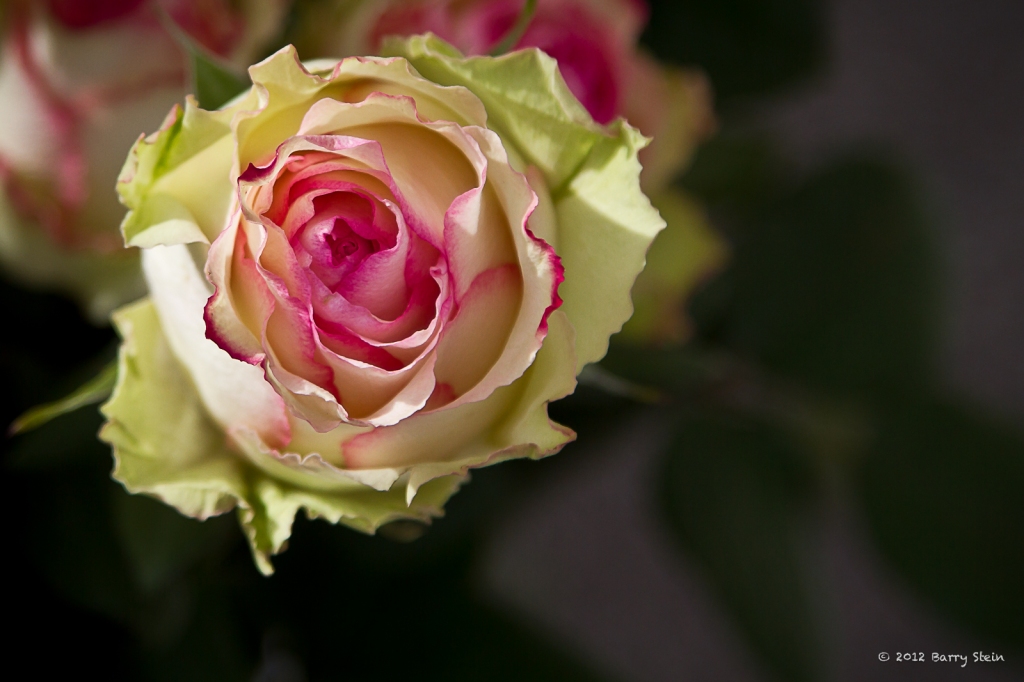 I strolled through the market trying to not zoom in on any simple objects too closely. I forced myself to pull back to view all that jazz from this chorus line of color. 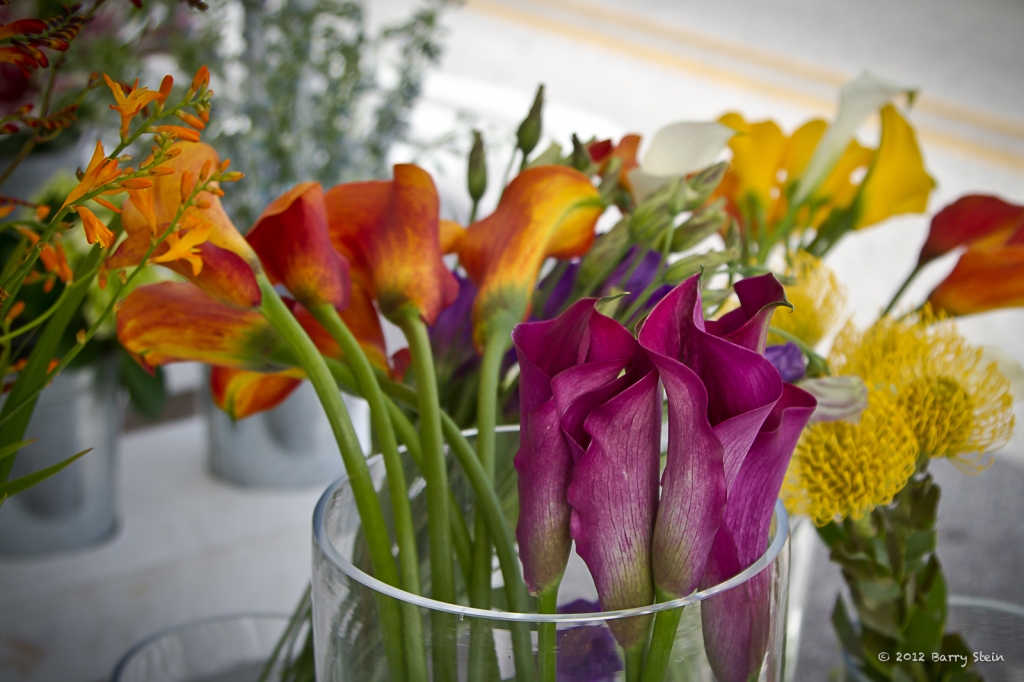 Suddenly, in the middle of the mulling crowd of calm, a Chocolate Milk man appeared from another dimension. POP! he was in my scene. Had I not had my camera aimed in that direction at that time, I would have missed him. I shot away at 8 frames a second and then paused to look out over the camera to see him with my own eyes and he was gone.

Sometimes what we think is going on, can’t even come close to what is actually going on. Who is watching you that you are completely unaware of? What do you miss because you blinked at that moment, turned at that exact time or didn’t move fast enough on the matrix of coincidence to bump into someone you know that you haven’t seen in forever? 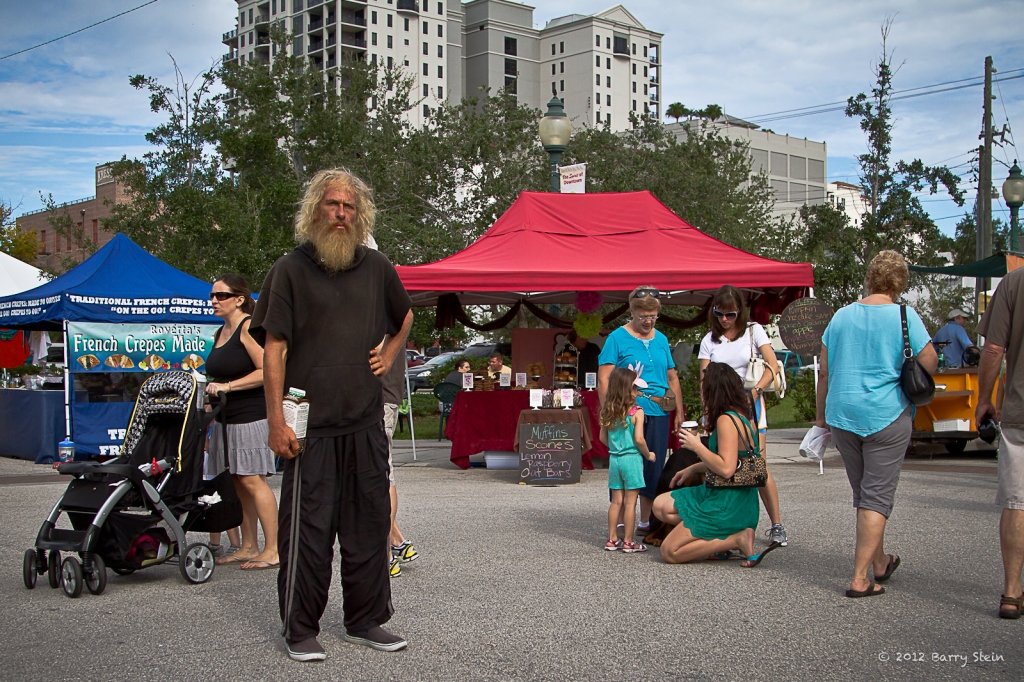 Despite the size of the crowd, some people see no one and exist in the bubble of their own world. They wander through our world without ever acknowledging our existence. You can recognize them because they usually wear a lot of red and if they have a dog, they dress the dog in similar colors to what they’re wearing. If you watch closely, you can catch them talking to their dog.

They don’t care who see’s them because to them, no one else is around that matters anyway. 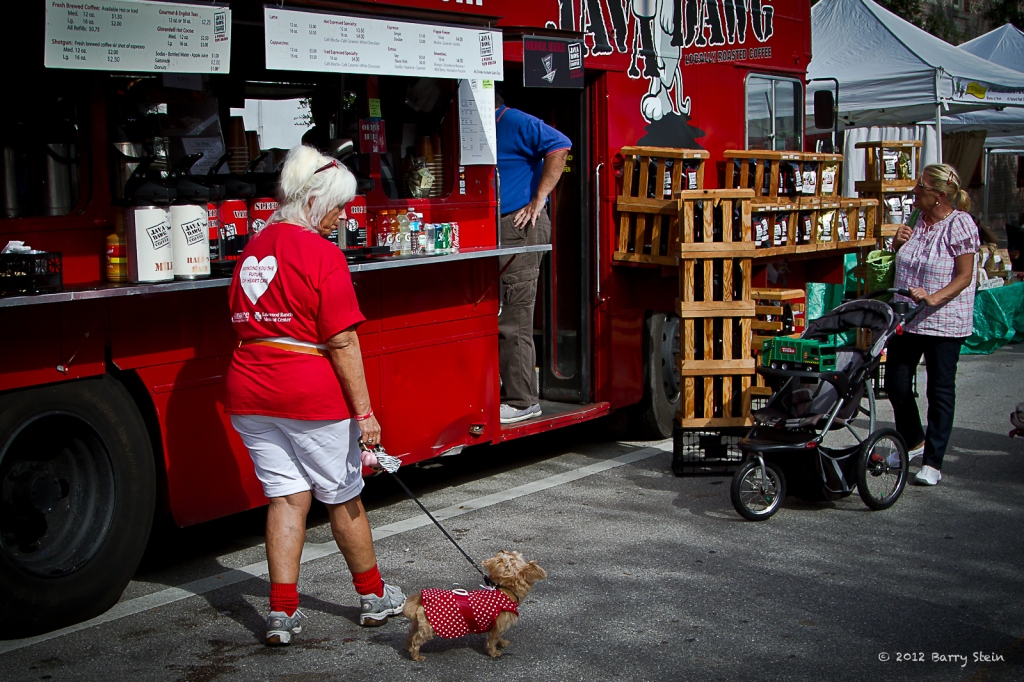 It was such a beautiful day, I thought I’d visit another place where I knew nothing special would happen. The beach was practically empty that day and I knew I wouldn’t get any pictures worth while. As I sat on the shore and studied the random nature of how the water washes in and back, I thought about how this reflected life.

I know I’m not the first person to think that the random events that life serves up, be they good or bad, floats into our world on a happenstance tide at certain times. For this very reason, we have to always remember that at our bleakest hour, something can float up on our beach that will change the course of our lives. Just as things are randomly taken from us, so too are they delivered.

That’s when the buried treasure started to float ashore. 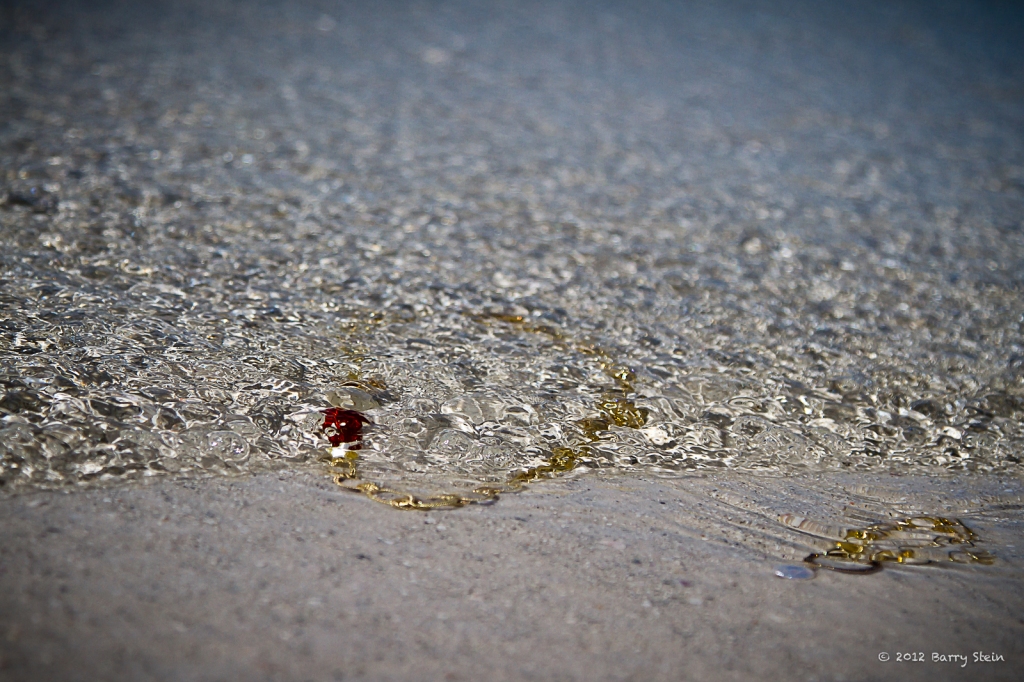 At first it was  hard to see as the twinkling of the metal and stone mixed with the shiny glimmer of the water. I watched with amazement as priceless jewels got washed up right in front of me. 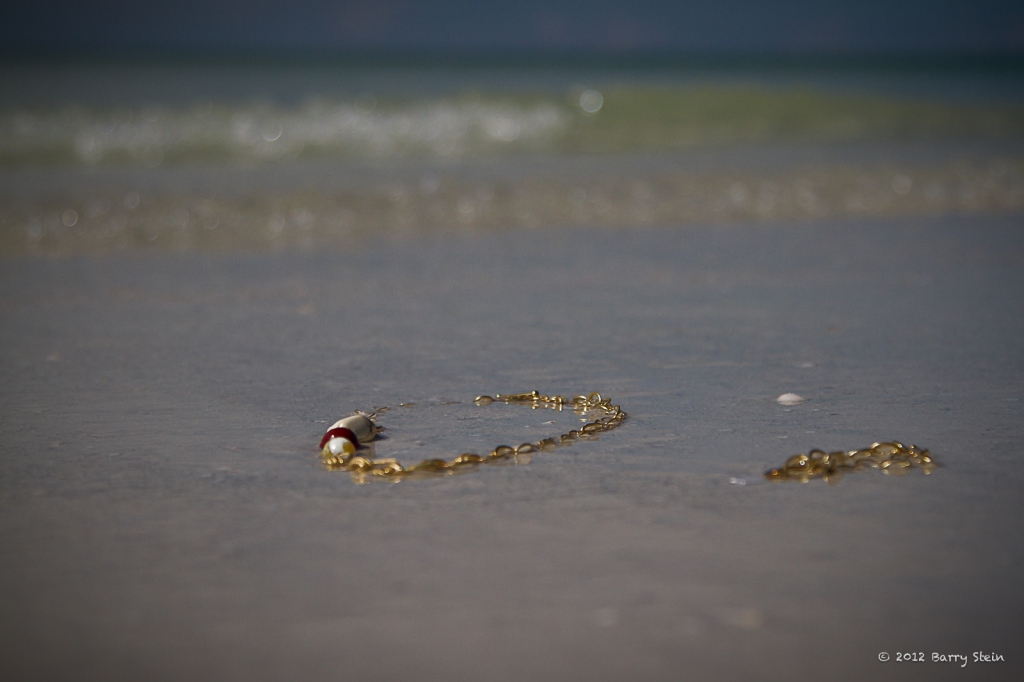 At first I denied my good fortune and then I saw more, just laying there in the sand. The most beautiful jewelry that the world has ever seen. I thought maybe that it had come from the lost city of Atlantis that was rumored to exist off the coast of Siesta Key. Maybe the last series of tropical storms broke open a cavern or unlocked some pirates chest of booty. 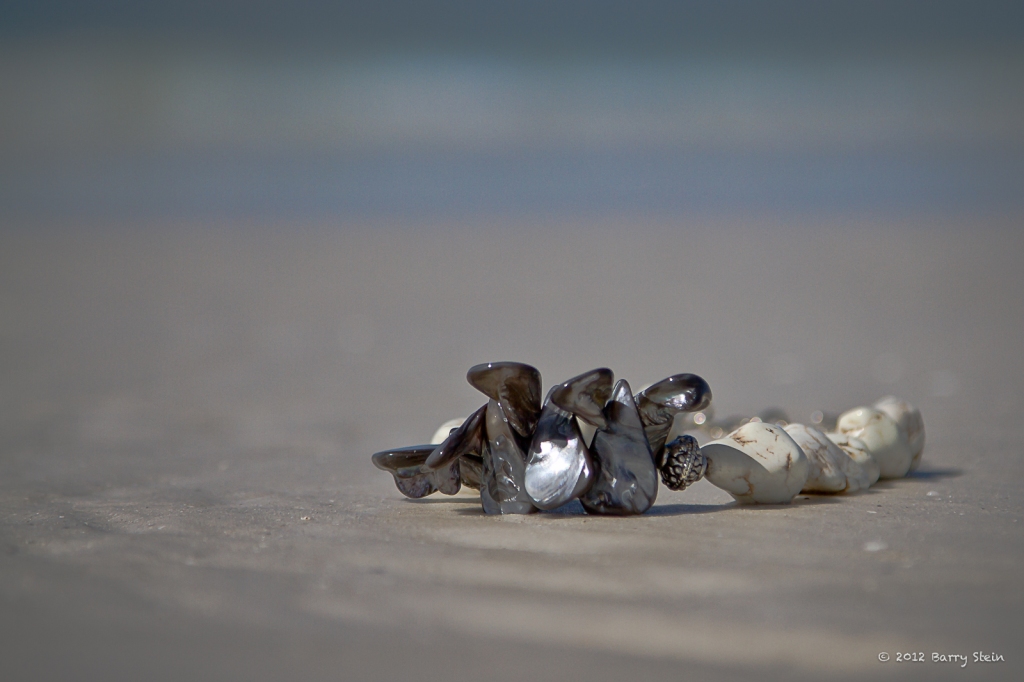 Spectacular necklaces made from rare shells and stones, linked together in patterns designed deliver magic powers and adorn one’s body. What divine ethereal  force, gods or goddesses could possibly make these much less lose them to the gulf’s random tide? 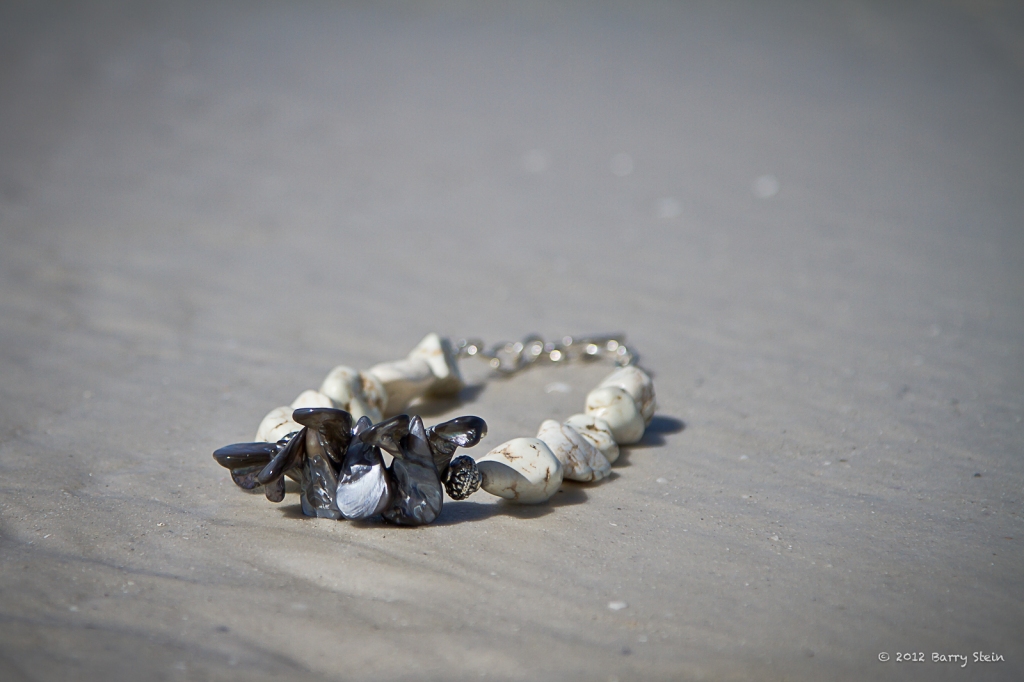 I continued to walk along the shoreline, renewed with hope that the universe is still serving up the goods. The kitchen at the rescue mission is obviously not closed and decorative nutrition is on the menu. 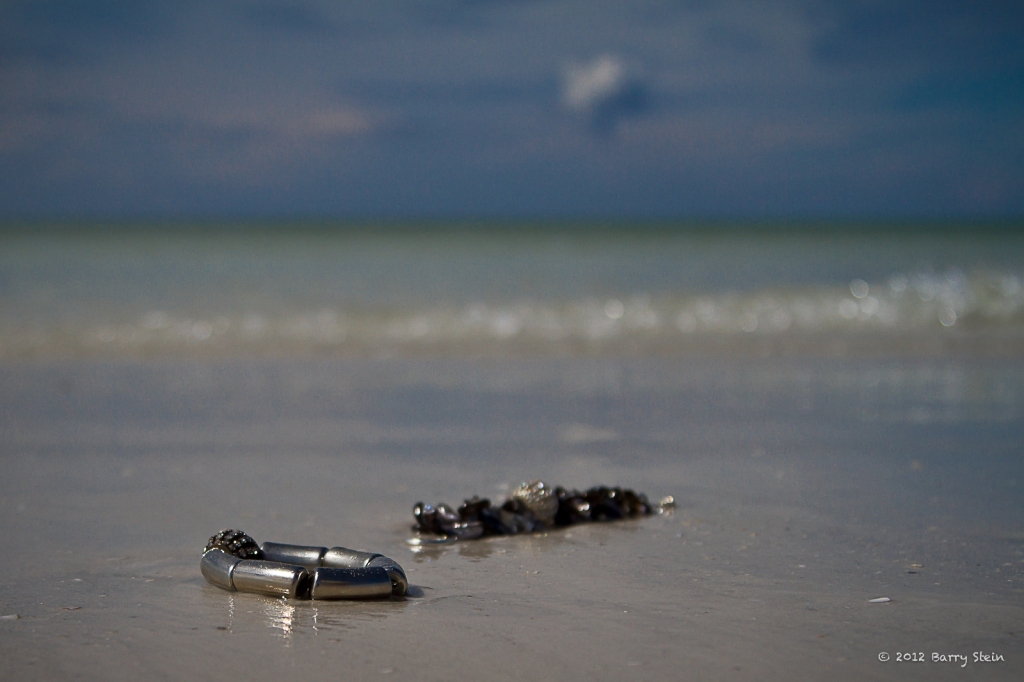 Feeling the hot sun on my face, the cool breeze at my back and the sand between my toes, I walked. I passed one sparkling piece after another. Some had gorgeous polished stones, others had priceless jewels held in place by beads of metal coated bones and polished sharks teeth. I marveled at how the ancient tokens were used as clasps. 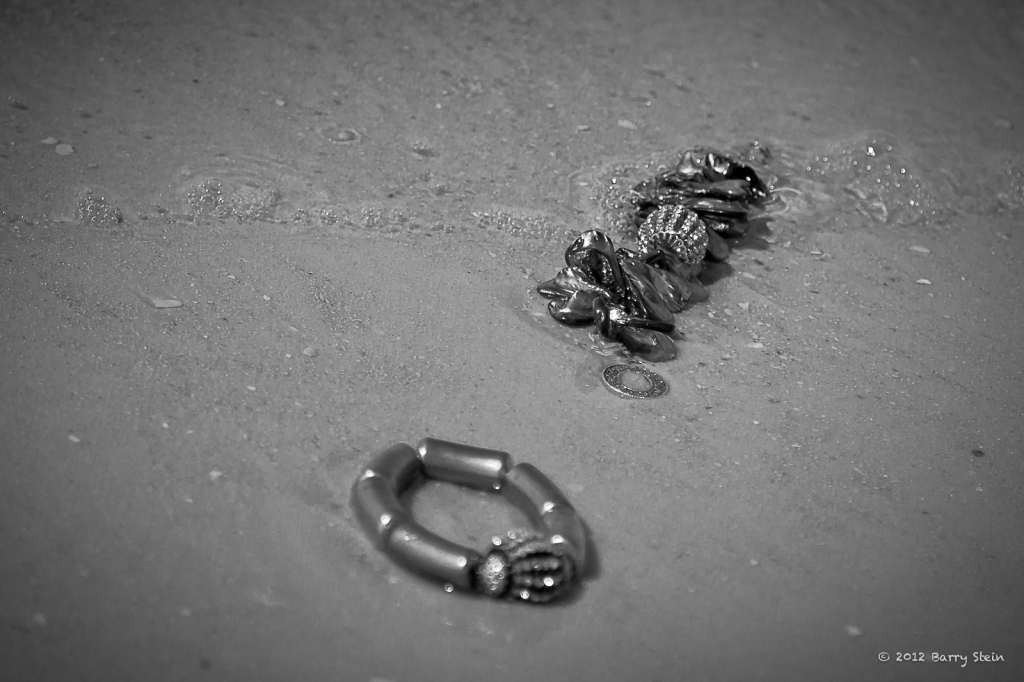 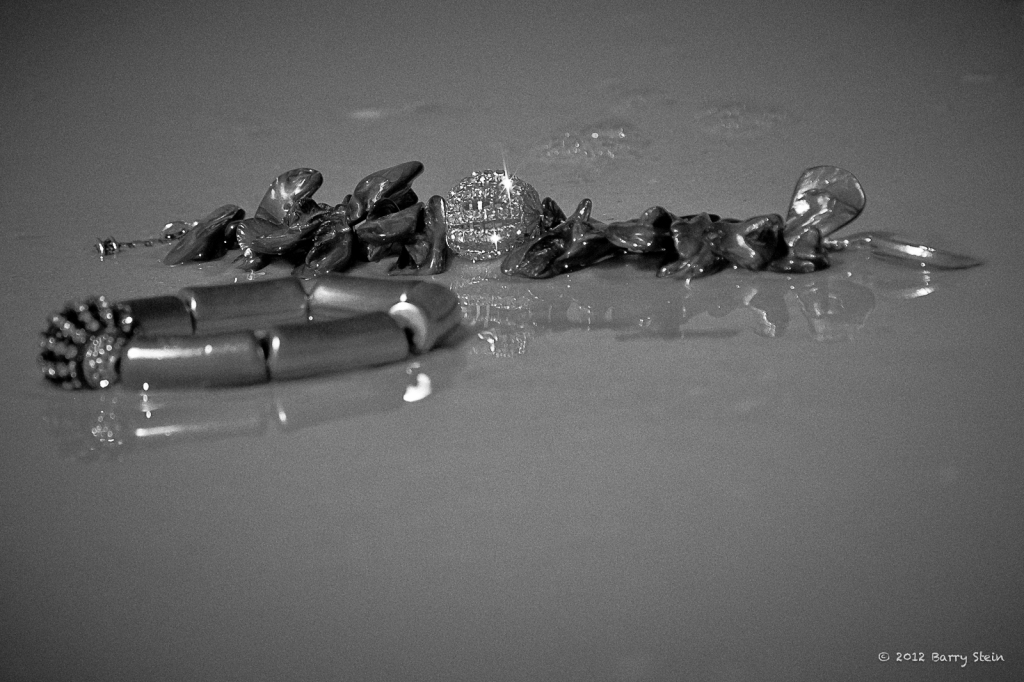 Further down the beach, more buried treasure came ashore. As I got closer to the this next necklace and bracelet I noticed that the beads had actually captured little bits of sun in them. What race of people could actually capture drops of sunshine and contain them in beads alongside bone, rock and metal?

I wondered if these magnificent pieces had magical powers. Perhaps they would make older men and woman young again or perhaps make the unfortunate looking mystical and adored. Maybe the poor could be made wealthy from wearing them, or just simple lose their desire for wealth. 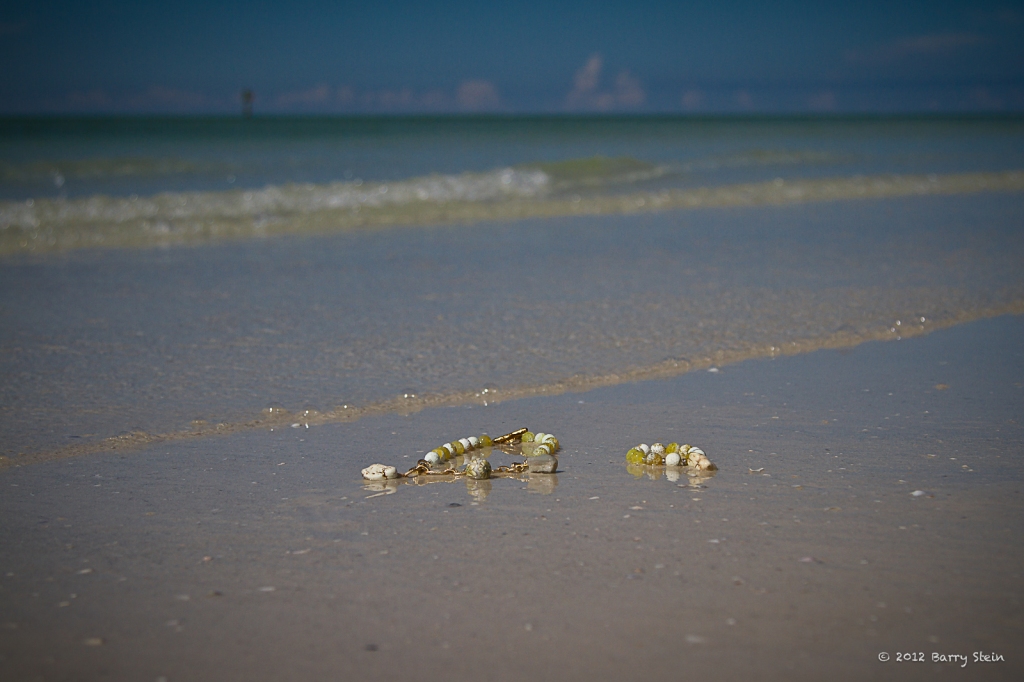 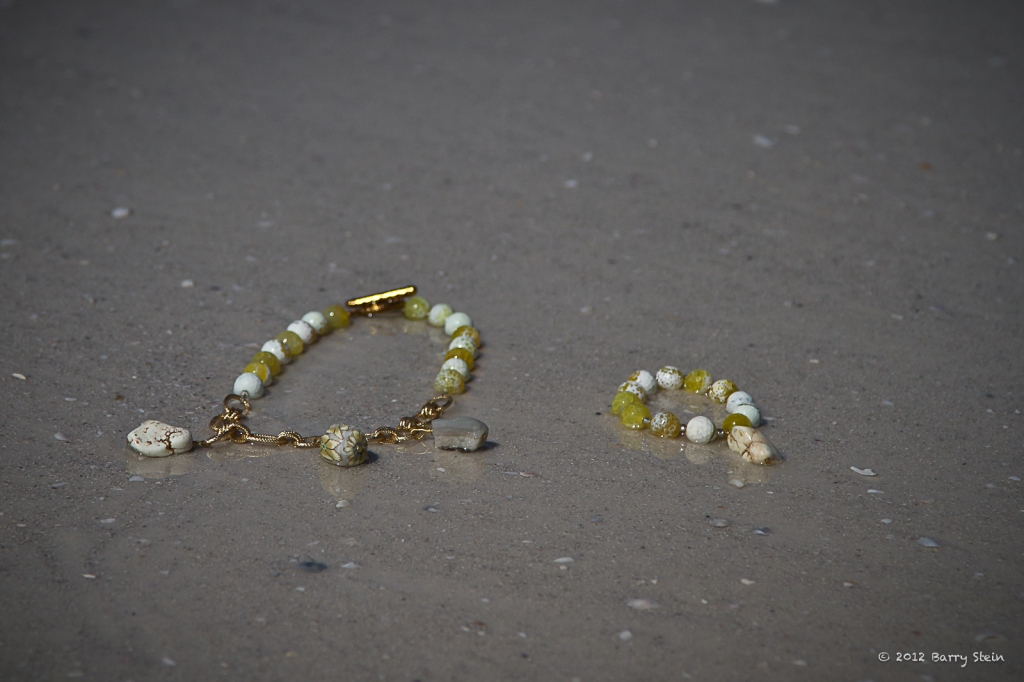 I kept moving forward appreciating the beauty without the need to possess or control it and that’s when I saw the frozen tears. It seems that this ancient race of artisans made their gems from exotic sources. This next bracelet looked like the tears of a mighty cry was pressed into one giant drop, but around the band were beads that contained the looks that little children give their parents.

Somehow they managed to capture unconditional love and forgiveness in tiny aqua and brown oval beads. Between each emotional bead were the drops of sweat collected from the foreheads of mothers in childbirth. 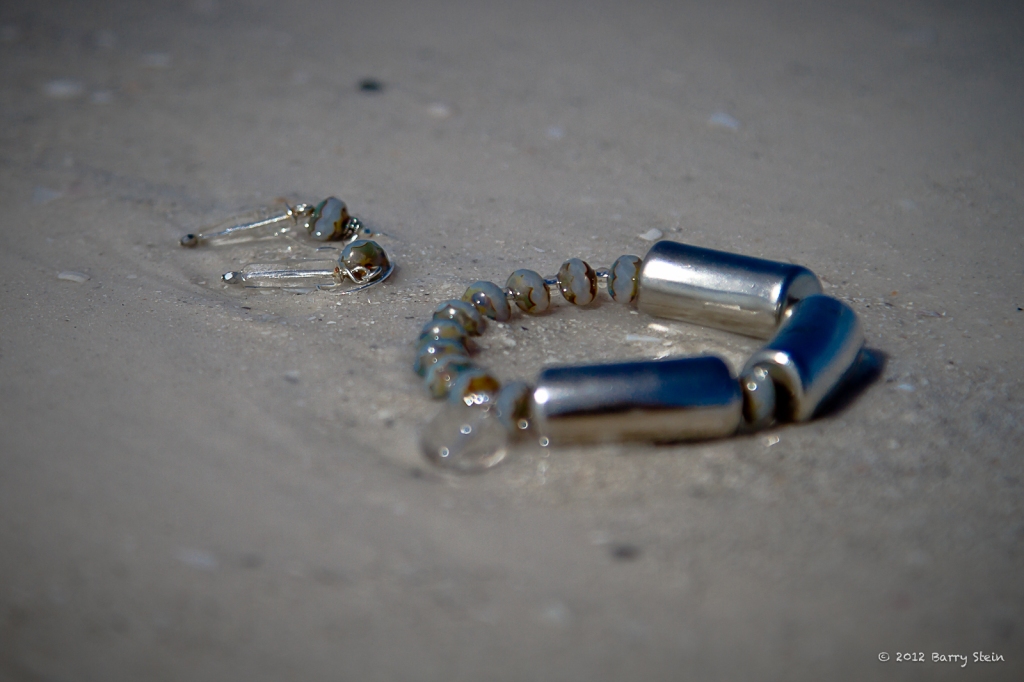 I kept walking and wondered how this could be done and had no answers. Beads with unimaginable colors held together by metal squares carved with inconceivable patterns, balanced by nature and powered by the best of everything. Naturally a necklace with a matching bracelet laid strewn in the sand. 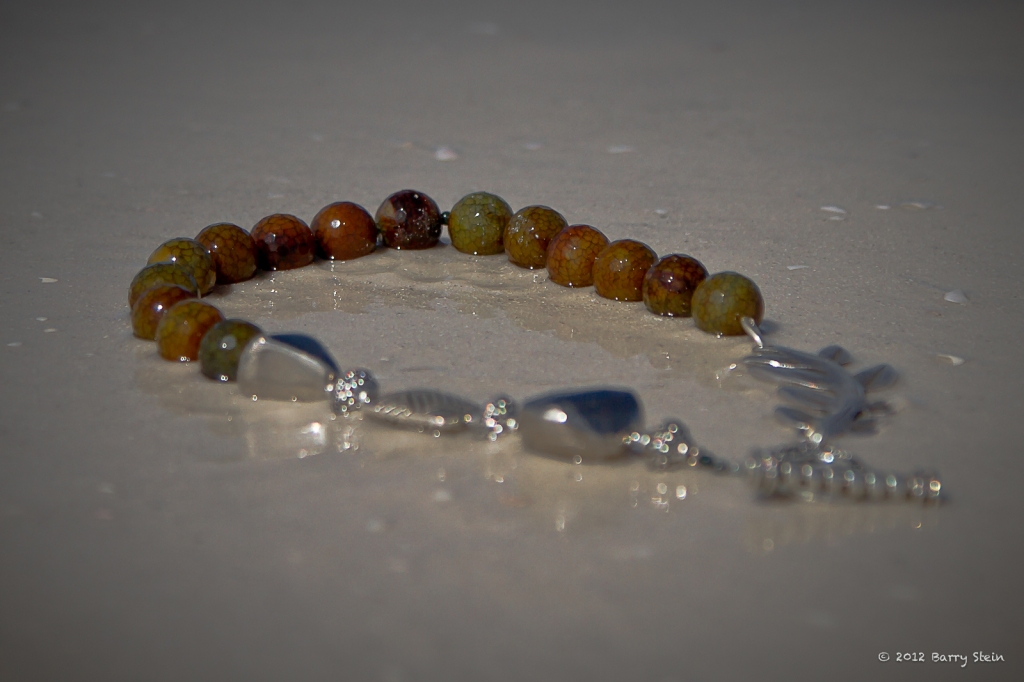 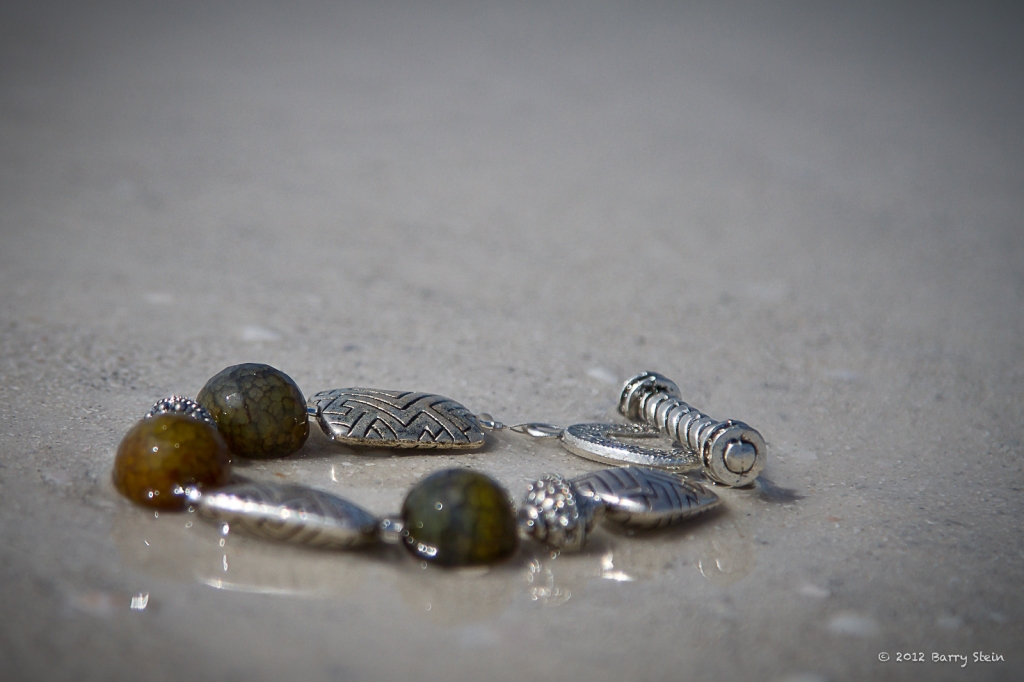 Maybe the beings came on shore in the middle of the night, had a festival on the beach and then disappeared like The Chocolate Milk man. Maybe they stripped of all their priceless accessories and partied all night long, blowing into conch shells and throwing up talcum sand like fairy dust.

One piece was deliberately left behind and was posed perfectly on sand dollar. A band of suede with wire wrapped beads in a pattern of random energy. This must be the one they wear when they want to live forever and never get tired. 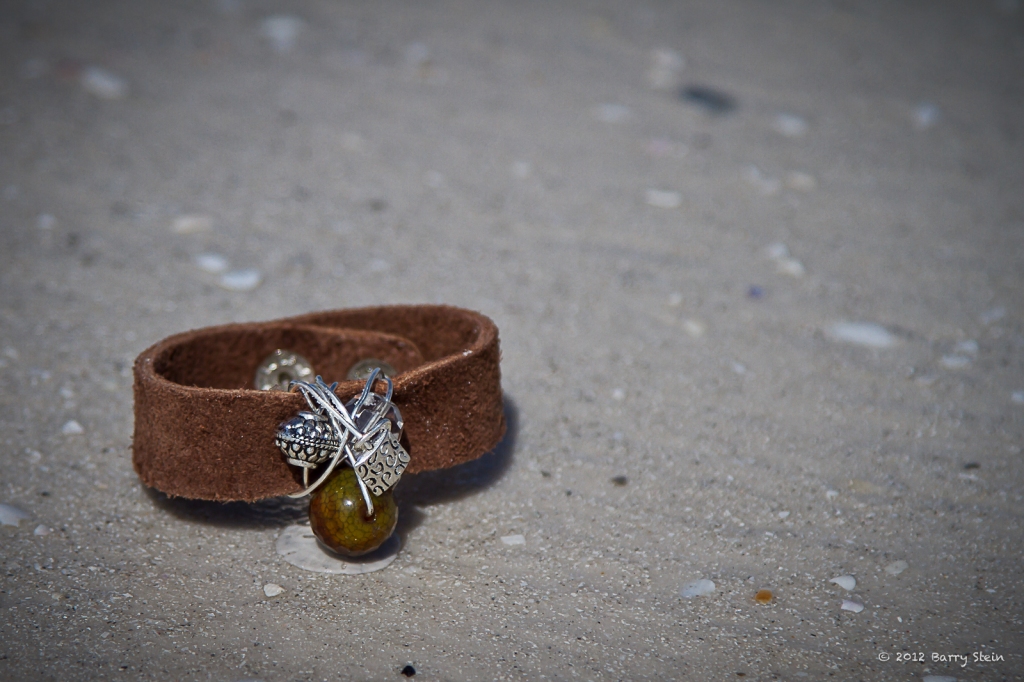 Behind me a baby floated in from the distance of the gulf. A young couple went out to retrieve it. Perhaps they had not been able to conceive one of their own and was told to come to this beach when all hope was lost. 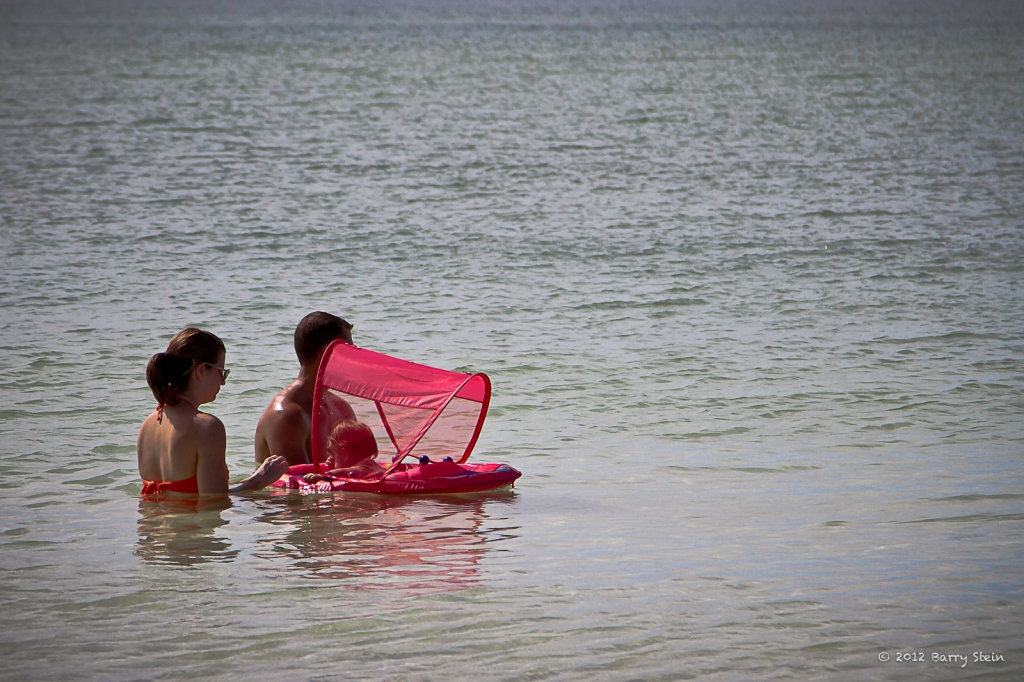 Just then a bird caught the corner of my eye and I turned away from the baby and looked up from the jewels on shore. This bird was strolling into the water, smiling at its reflection, for with it, this bird would never be alone. 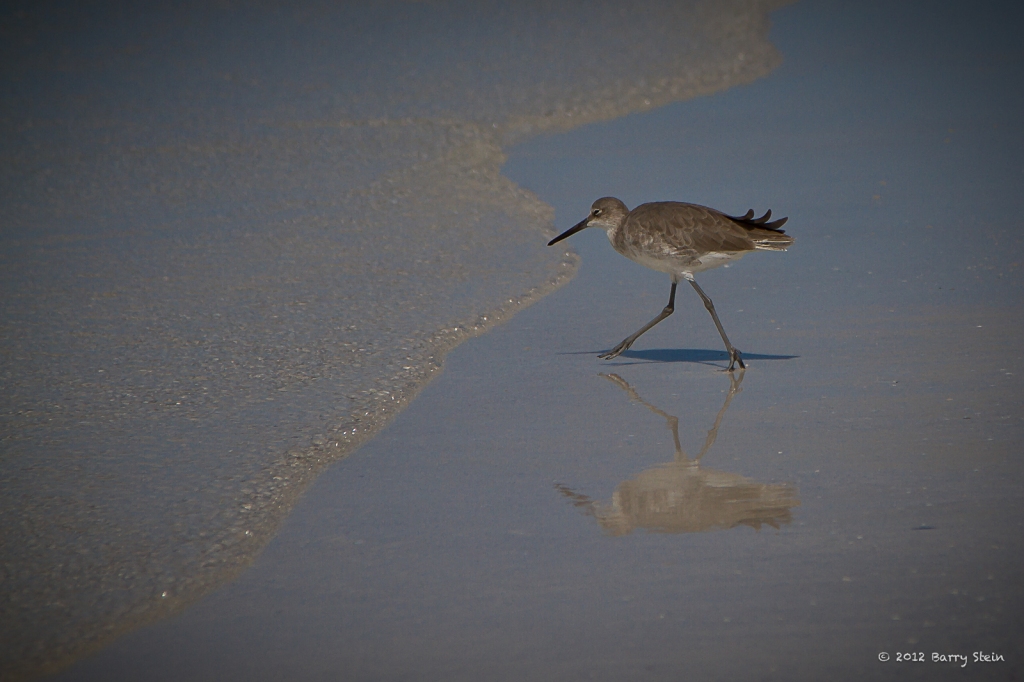 In the distance I heard the crunching march of another visitor. In their darkest hour, they too must have learned the truth about waiting for buried treasure to be washed up on their beach. 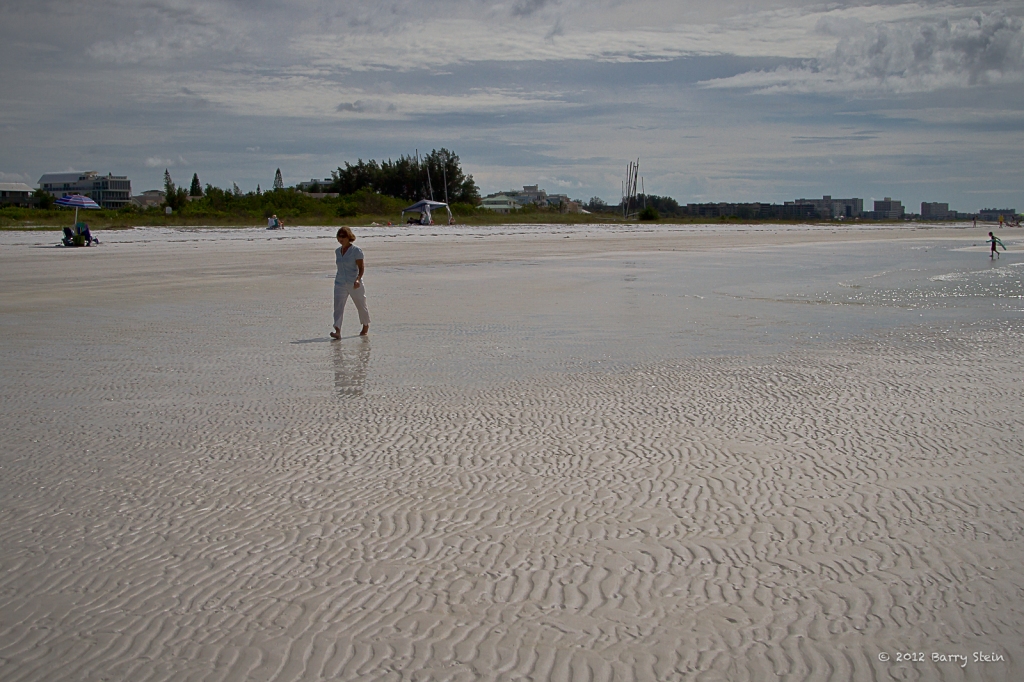 22 thoughts on “A SHORE THING”