Long ago, there used to be televisions with these long telescopic metal antennas coming out of them. You would adjust the picture on your TV by moving around these two long metal stick-like rods at different angles. These antennas magically picked up the television signal from the television station. You couldn’t see how your TV was connecting to the picture, you just knew it did.

Today, we walk around talking on cell phones. People are magically connected to one another through some force in the air that miraculously conducts the signal. We can’t see it but it’s obviously there. Millions of people talking to each other through invisible signals all around the world.

This mystery of things that are there but not seen was felt this past weekend where ever I visited. Like the TV that captured a picture or the Cell Phone that collects voice, data and pictures, I was out there bumping into strange waves of oddness. Then when you mix in different people’s tastes, perceptions and goals, one finds one’s self in a strange Land of Oz type tornado that delivers you to a weird world of little people and yellow brick roads.

I closed my eyes to calm my nerves from the strange and bizarre all around me. Breathing deeply I tried to regain my sense of taste, my conviction for what’s right and the grope of what’s familiar.

Being whipped around by invisible forces, I touched down in a place called St. Petersburg. There was no one around and all I could see were parking lots. Long dirty parking lots with sprigs of grass popping out from countless cracks in the pavement. In the distance was a huge baseball stadium. There was no game going on, just a big stadium and an empty lot.

The only evidence of civilization was a tall apartment building in the middle of the flat nothingness. I walked into the apartment building to find out where this Oz-like tornado had dropped me. There were strange benches outside the entrance made of surf boards. As I approached the main entrance, a gigantic black man ducked his head as he walked out the door.

We nodded at each other as if everything was normal. I wandered around inside this strange tall building in the middle of the flats, spoke to people of different sizes, stared at the odd colors and shapes that looked like PeeWee Herman’s living room and a Nickelodeon Studio had been combined in a blender and poured out in a lime green glass.

I knocked on a door that had a number sponge stenciled on the outside it, and a little round woman opened it. “I’m trying to find home.” I said. A tiny little black lady wearing 60s style eye glasses with cat shaped rims, suggested I go to this place called The Pier and look for the dancing man who juggled sticks.

She said I’d recognize it as it resembled an upside down Pyramid with colored cubes popping out of it like an adolescent’s pimpled face. She told me not to fly there because the street lamps had spikes on the tops and I would not be able to land. I wandered through strange streets with dark bars open to the sidewalk. Everyone owned a dog, everyone was drinking beer and smoking cigarettes.

I entered the strange acid trip of geometry building, passing all the Munsters strolling around like runway models. “I’m trying to find home.” I said to the lady standing in front of the elevator. She said, “Go to the top floor. There’s an observation deck and maybe you can see what you’re looking for from up there.”

Once at the top of the inverted Pyramid, things far away looked close and things close looked far away. In the distance was a Pelican who couldn’t have looked any closer. 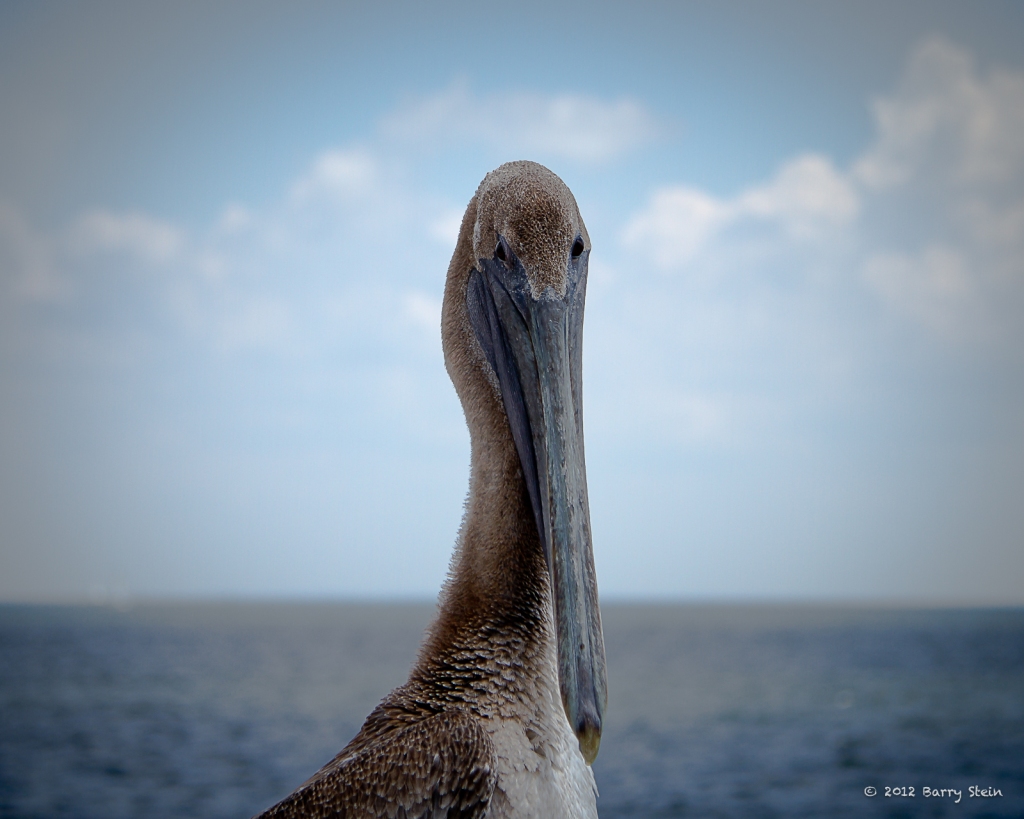 Also far away were the street lights that the strange lady warned me about. Good thing I didn’t fly there for she was right, there would be no way I could land on those lamps. 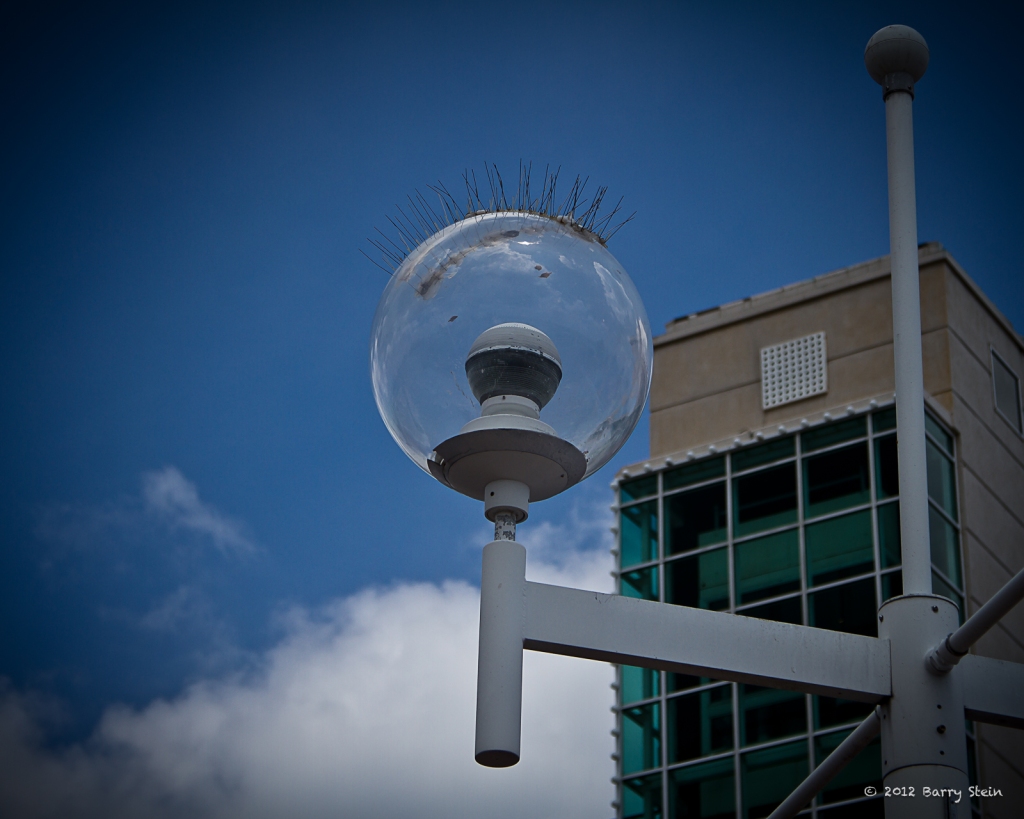 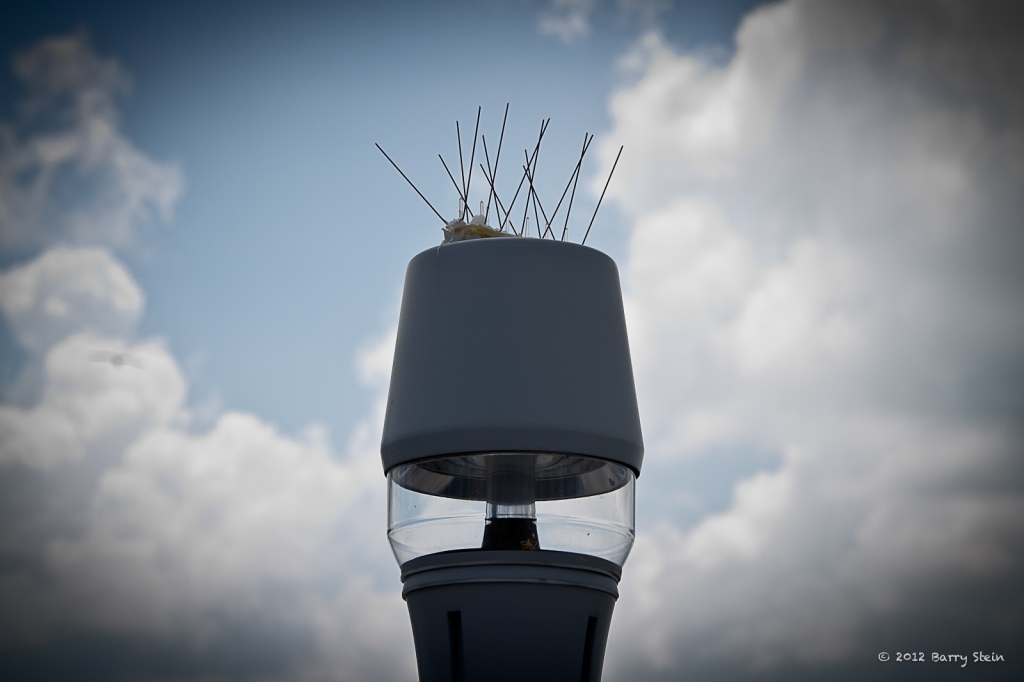 I walked to the back of the observation deck and looked out on the water. I felt nauseous and knew I didn’t fit in, in this strange upside down world. Then I looked down and saw the man juggling sticks. But he looked like a she. I yelled to the he she, “I’m trying to find home. Where should I go?”

He yelled back, “Look for the bridge that leads to the sky. At the foot of the bridge are other people also trying to get back. They will be trying to catch the wind in slings of cloth fashioned into giant kites. Make friends with the surfers wearing kites,  they will fly you home.”

Dazzled by his advice I went in search of the bridge leading to the sky.

After wandering around in circles, through dark dirty streets that were considered to be the fancy part of town, I saw two giant posts in the distance with a rich blue and white cloud behind it. I passed the homeless people living in the street who were considered the affluent, past all the streets named after killers, criminals and diseases… rather than flowers, trees and presidents.

I followed the path in the distance to the foot of the bridge where a group of surfers were trying to catch the wind, so they could  leave this crazy upside down world.

The sun was setting behind them which made it very difficult to see them, much less talk to them. One of them zoomed by in front of me then caught a gust of wind and off he went into the sky.

Others not so lucky just glided around in circles with their kites hung high. It was hard to tell whether the surfers were pushing the kites into the sky or the kites were pulling the surfers across the water.

Just then, another surfer caught a mighty gust of wind and off he went into the sky. Surely he would be home soon.

I watched them all, trying to learn how those that escaped did it, and avoid the methods that did not work for the others. One of the sky surfers thought that by taking a sharp turn into the shiny blue water, that he could catch the sky. It didn’t work. Another surfer was getting ready to escape as I watched from the beach.

While this lost soul in front of me adjusted his magic belt in preparation for his hopeful departure, another sky surfer banked hard, pushing against the water.  I thought maybe I could grab the feet of the next surfer that caught the air and he would take me home. 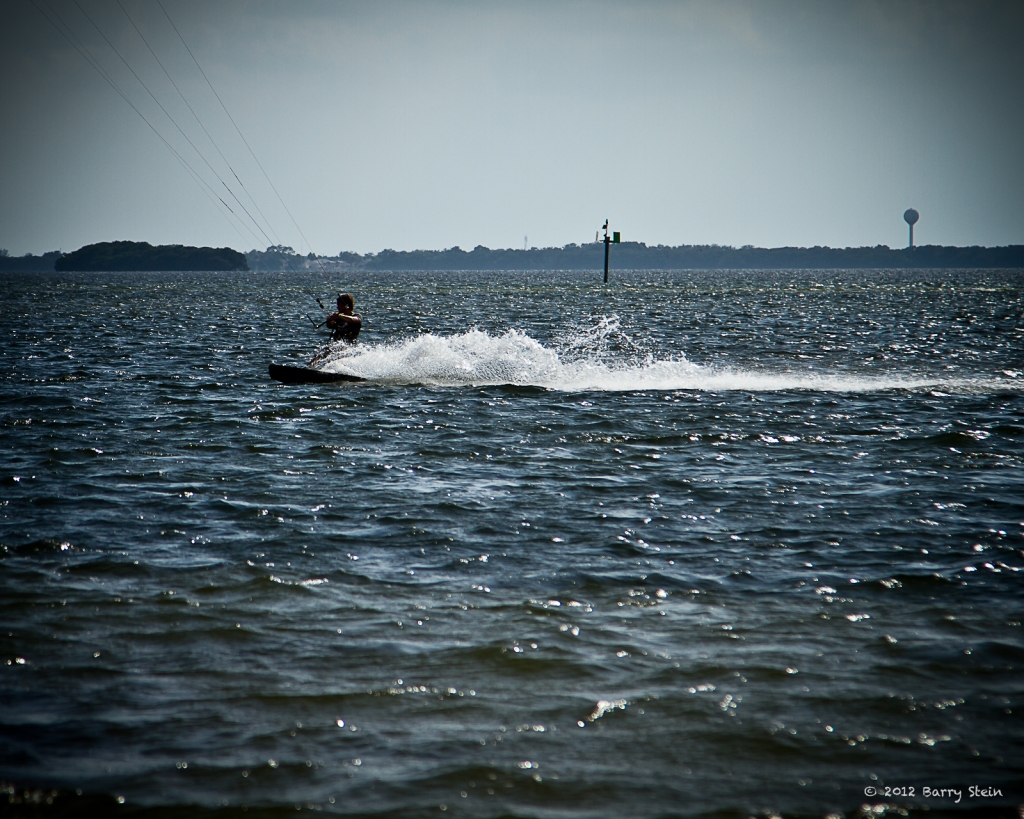 One of the many eunuchs scurrying around the beach was helping those trying to escape by holding the kite just right. This was a big beautiful red kite. Maybe this magic wind catcher would take me home.

The eunuch stood out in the water, twisting and turning the giant red wing, trying to get it to just the right angle to collect the gust. The kite strings were connected to a very large man with a very tight harness pushing into his bones and popping out his puffiness.

The eunuch twisted and turned the big red kite till it was just right. He yelled out to the man who took off on the wind, “Good Luck Sir!”

The eunuch went back over to the queen who was watching the day’s departures. “What a lovely day to watch folks catch the sky.” she said to her eunuch. 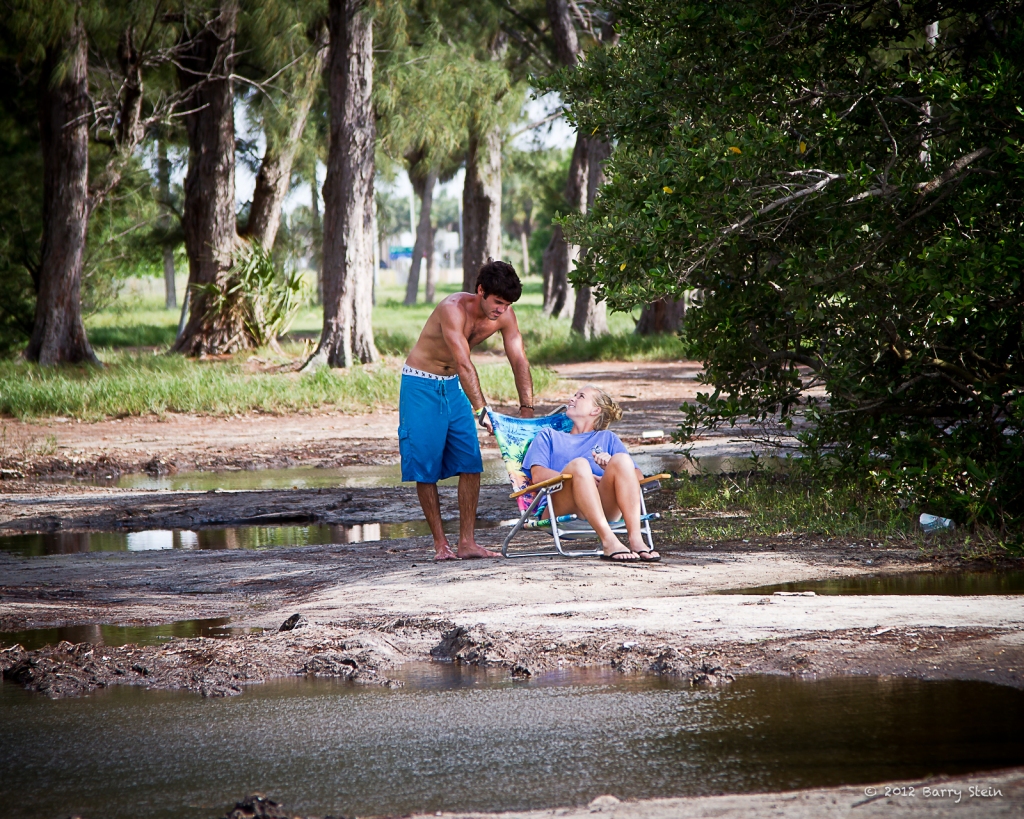 Just then a gust of wind almost blew me over and forced me to turn back to the water. Another surfer was preparing his kite. Something about this lime green kite caught my attention and I just knew it would take me home. He twisted it and turned it. In the background a huge black van pulled up behind us all at the beach. It was playing loud Motown music from the 60s.

The door to the van slid open with a loud BANG and the little woman with the cat glasses and the giant black man stepped out of the van. She slapped his leg and pointed at me. I knew they were coming to get me and bring me back to the Nickelodeon blended PeeWee Herman building. The giant started running toward me. “Ain’t no mountain high enough….” by Diana Ross was blasting from the van.

The wind started to whirl and the surfer with a lime green kite caught the biggest gust of wind. I chased after him as he was about to get lifted into the sky. At the very last-minute, just as the big Motown man got to me, I grabbed the lime green kite surfer’s ankle and we both took off into the sky.

Off we went into the puffy cotton ball clouds. Higher and higher. Everything that was once big got small and all that was small started to get big. High into the clouds we flew. I was finally heading home. 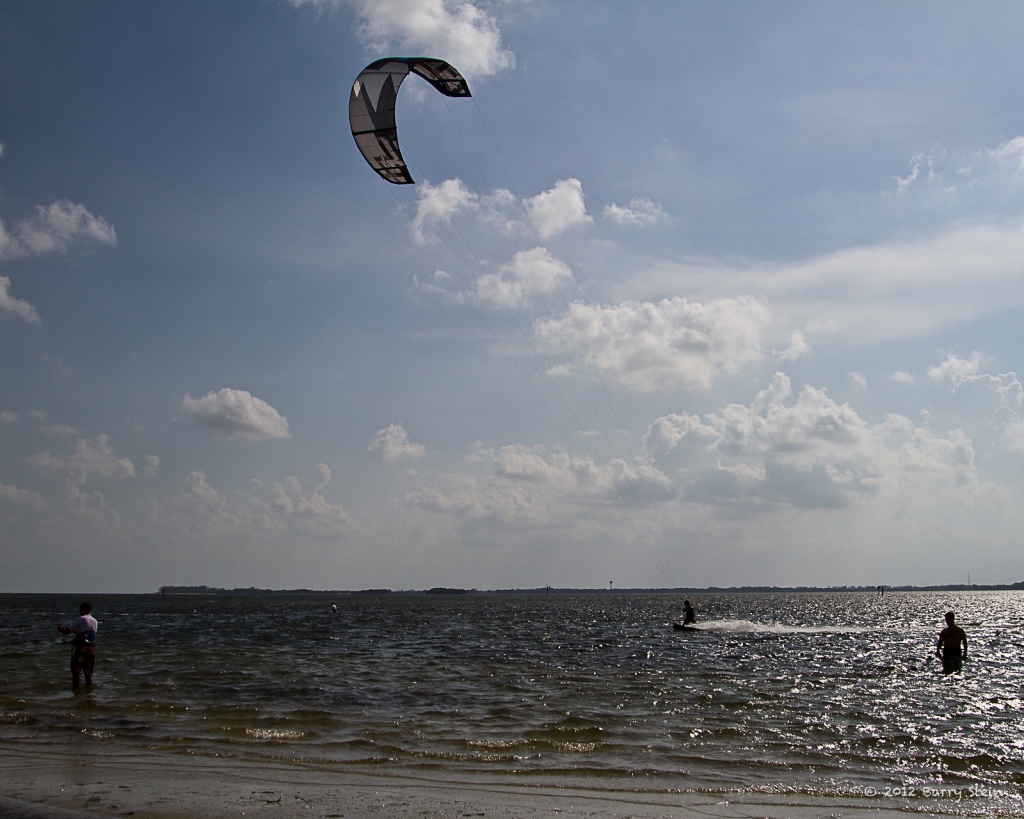 8 thoughts on “CATCHING THE SKY”