Last weekend was very festive. My youngest daughter got married to a wonderful guy with a wonderful family. I hugged my ex-wife and her new husband. My daughter babysits part-time for a woman I used to live with twenty years ago. She and her husband also attended the wedding and I enjoyed kissing her hello and goodbye and maybe once or twice over the course of the reception.

My parents in their 80s, danced their asses off and I delivered the Father-Of-The-Bride speech flawlessly, except for a few emotional breakdowns. My whole world, who I rarely see all at once, converged on Sarasota to do combat with Tropical Storm Debbie and despite her splashy flogging,  we all got married delightfully and in concert with her raging downpour.

Such an out-pour of love and affection and admiration and celebration and then everyone got on their separate planes and flew home. Yesterday, I returned to a start of another weekend of me wandering around, thinking I knew what was going to happen, and as usual, I obviously did not.

It all started with a visit to what was supposed to be the biggest festival in town… “The Shrimp and Lobster Festival!” Needless to say, the oxymoron was true in this case. How big can a celebration of shrimp actually be? The answer… not very, but I got a good shot of a steaming lobster.

In honor of the Forth of July coming up, I waited endlessly, till the steam coming off the lobster formed shape of a bald eagle, then took the shot. 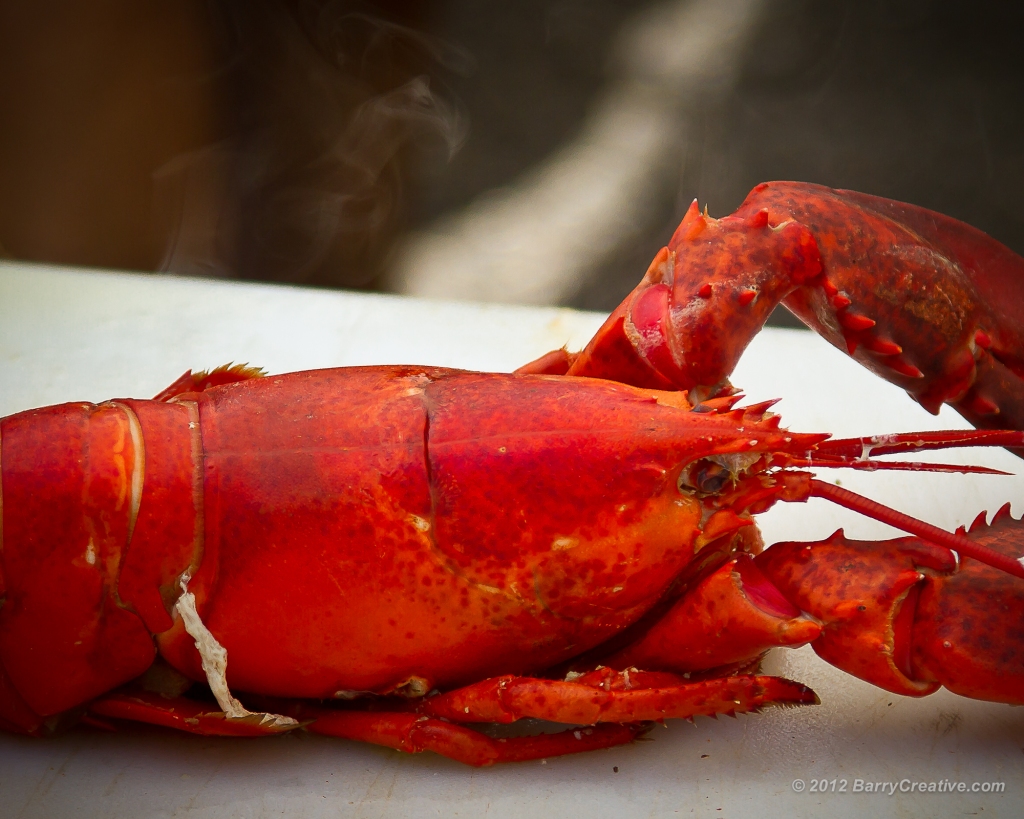 As I strolled the steamy hot streets of downtown Sarasota, in search of a subject to shoot, I turned down several alleys looking for the unseen. One of the alleys I came out of was connected to sort of, a main street. There was nothing on this street. No cars, no bushes, no flowers, just a lone woman sitting against a brick wall, way in the distance.

I walked all the way up to her, and from across the street I asked to shoot her. She said, “sure…but it will be the ugliest shot you take all day.” As I walked away thinking it was far from the ugliest shot of the day, I wondered why she would say that. What is it about all of us that refuses to see the beauty inside? What is this disease of the mind called comparison? Ugly compared to what? 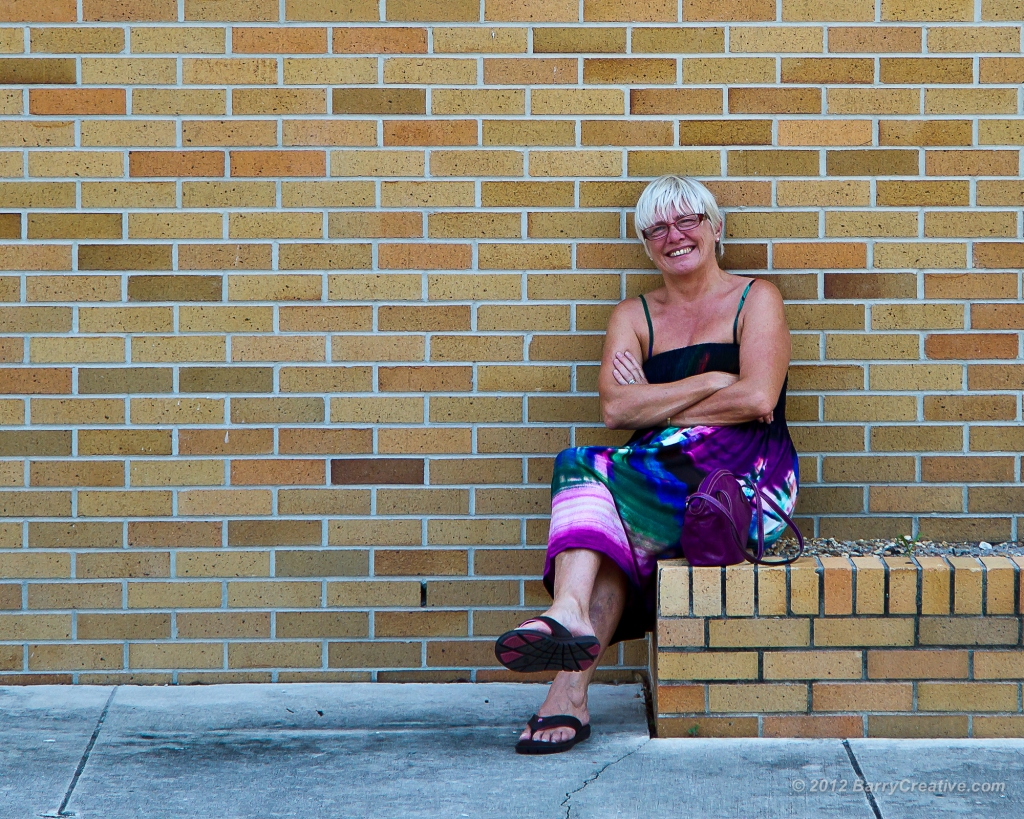 I turned the corner and shot another stupid flower. I realized that no matter how many stupid flowers I shoot, there is always a new angle, a new direction that the light shines on it, and a new set of shadows cast. How can anything be compared to anything else when no two things exist identically from one moment to the next. 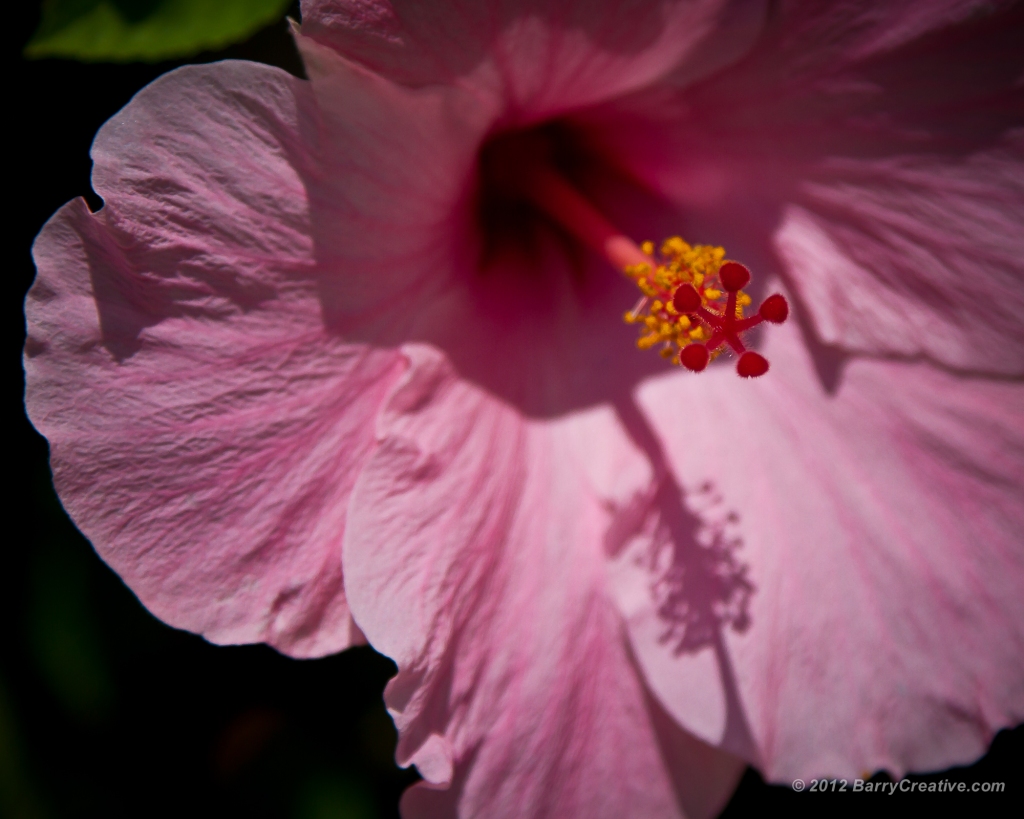 And then I saw another stupid flower hiding in the bushes. Completely different presentation and I had to take it. I started to wonder if any ordinary day holds the reveal of unseen wonder pent-up and waiting to pounce.

I walked past the most ordinary plant in town, but from the angle I saw it at, it didn’t look like a plant to me at all. It looked more like a star beaming shining rays of light. I almost didn’t take the picture because my mind said it was just another stupid plant. But my camera saw stripes of pride.

A few blocks away, I noticed a flicker in the bushes. A million people would pass this place and see nothing, but I saw a flicker of nothing. I didn’t know what it was but I shot it anyway. I still don’t know what it is, but I liked it and am glad I captured it.

As I walked around town, I felt like the photographer with no mojo. Wandering aimlessly, having forgotten my ability to conceive. I wanted to be like Russell James, the guy who shoots the swimsuit edition for the Victoria Secret Catalog. Now that’s a job. I’m sure he surges with virility and passion every day as he plays with the most beautiful models on the planet.

That’s when I stumbled upon a non-erect palm tree, with its coconuts missing. I had never seen anything quite like it. It was as limp as a noodle or a rope and as we know, you can’t shoot pool with a rope, much less shoot anything else.  I took it as a sign to start pumping some blood to my photographic loins and conceive of something worthy of my eye.

That’s when I got the call from my friend Macy. He and  his wife Lucy were in town for a few days and they suggested meeting me at some bikini boat racing festival at a park on the other side of town. We had just learned that we were all in the same town after not having seen each other for over 25 years. Our kids used to play together when they were infants and now they are all grown and getting married.

It was so good to see them. We hugged and drank a beer and met some new friends and caught up real fast. Everything that has happened in the past quarter century slipped away and I returned to the days of my youth. Those were the days when we were all in our twenties and they hadn’t invented a measuring device to count how much testosterone was coursing through my veins.

That’s when the finalists came out on stage for the last stroll before the winners got picked. I got lucky and found a good spot to shoot from. This was much different from hiding flowers and self-deprecating ladies up against brick walls. 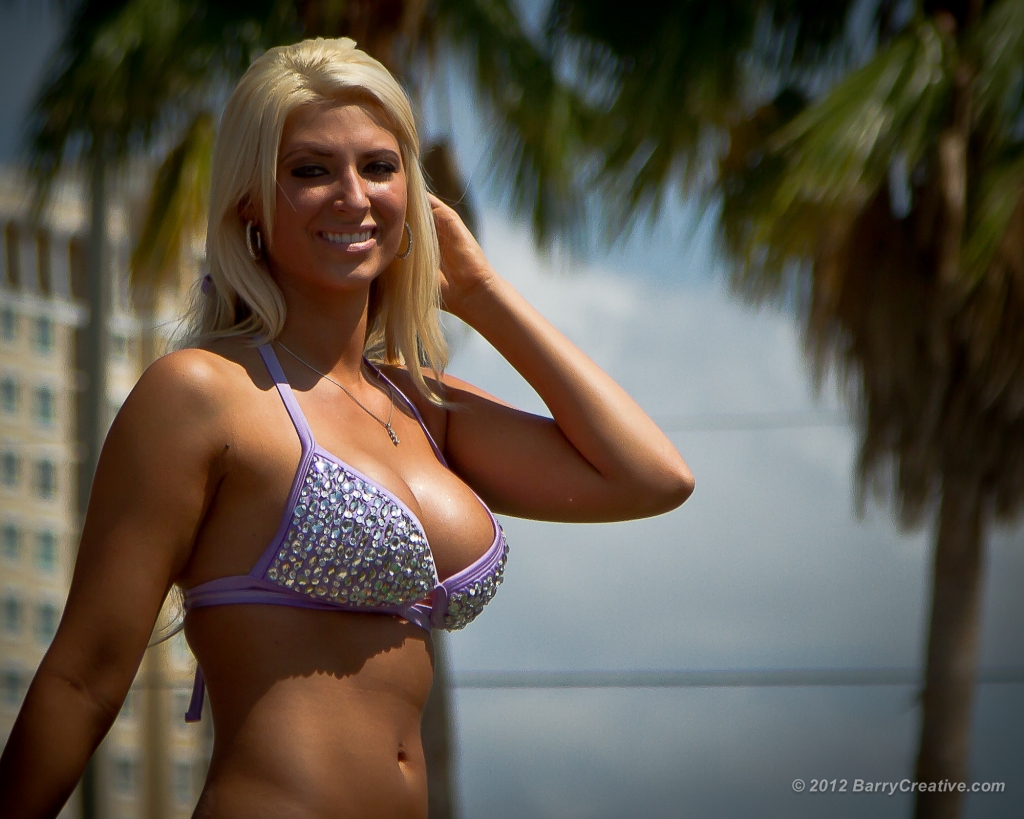 I was instantly transformed to Russell James and my machine gun camera was shooting 8 frames a second like an adolescent boy’s… well, you get the picture.

Now, I know in the past I’ve obsessed on objects of beauty. I’d like to claim I don’t do it anymore, but every once in a while I lock on to something and it gets my full attention. Is it me? Or is she worth taking a few extra pictures of?

As I shot so many pictures that my camera started getting hot and sweaty, I wondered what she was like on the inside. I wondered how bad of a biker dude was her boyfriend. I wondered if he was so tough and bad that he had a scorpion tattoo on his neck. Was he a great lover or did his crotch smell from sitting for miles on the motorcycle? Was she an exotic dancer? Did her daddy neglect her? Does she speak English? Would she appreciate my puns?

If she was ever with me would I turn into a jealous freak and long for a companion of comfort over an excruciating bait for conflict, confrontation and insecurity? Would she live to scratch my back or rub my feet while watching “Castaway” for the hundredth time while I napped? Would she take my dog for walks and pick up the dog’s poop in a bag?

My mind raced about all that she couldn’t possibly be and look like that too. Then the voices quieted as I just shot her like a flower or a flicker in the bushes. 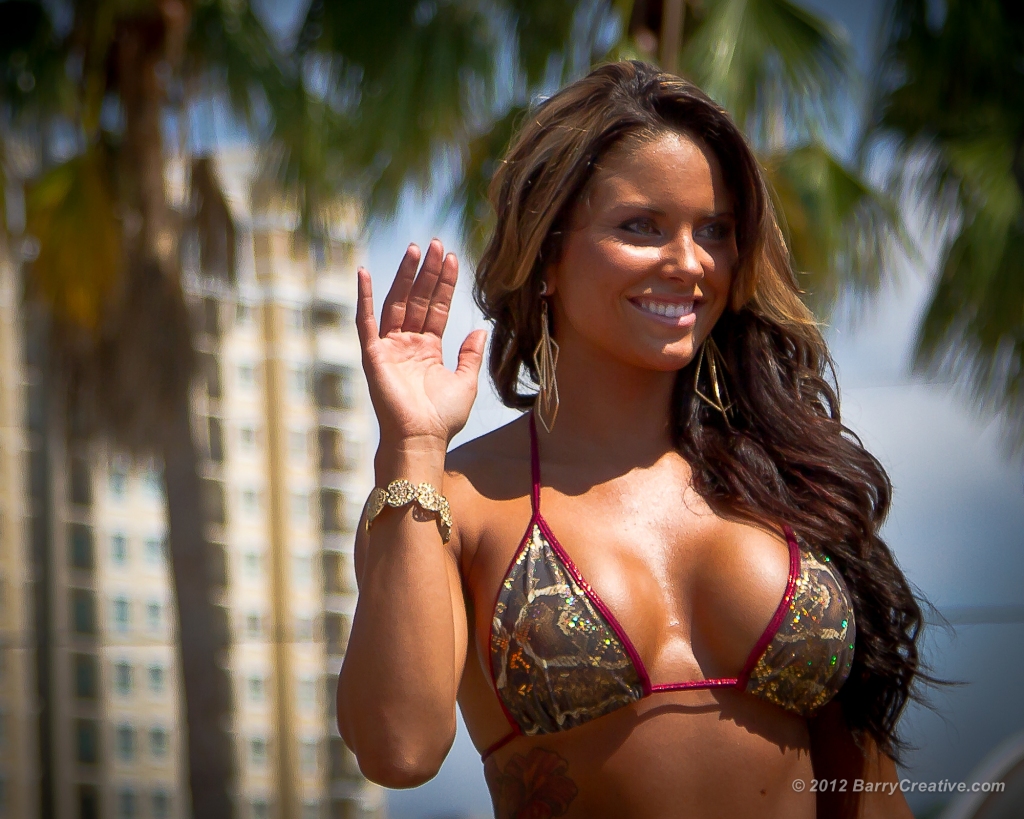 One after another they came out, walked the runway in front of the crowd, turned and walked back. Some stayed out longer than others to show off their back side.

I must admit, there is something about butts that lure me in. I guess like the Orchid that begs for certain bugs to land on its leaves and lick its nectar, I too am compelled to be drawn in by bikini bottoms.

One time I took a photo in a big fancy temple. The religious leaders warned the congregation to not take pictures in the temple, but because I couldn’t understand why, I of course defiled the house of God with a defiant snap shot and it was the last time that camera worked. I kid you not, something about that place was so intense that when I took that picture, it absolutely fried my image processor! It scared the crap out of me.

This was what I thought about yesterday as all the girls got together and all at once showed their asses to my camera. I had hoped that what I was witnessing wasn’t something so holy that it would fry my instrument. Luckily… all’s well that ends well.

When they were done, more beauties came out. I thought about what these women looked like as little girls. I thought about my little girls and all their little friends crawling around on the floor 25 years ago who are now gorgeous women not unlike these beauties. My girls are of course built from the inside out and their beauty comes from their love to do for others and their capacity to care and be cared for.

I’m sure some of these ladies are great musicians, talented painters and after they make the crowd hoot and holler they go home to their sick grandmothers and spoon feed them in the wheel chair while thinking about what charity they can donate to next. 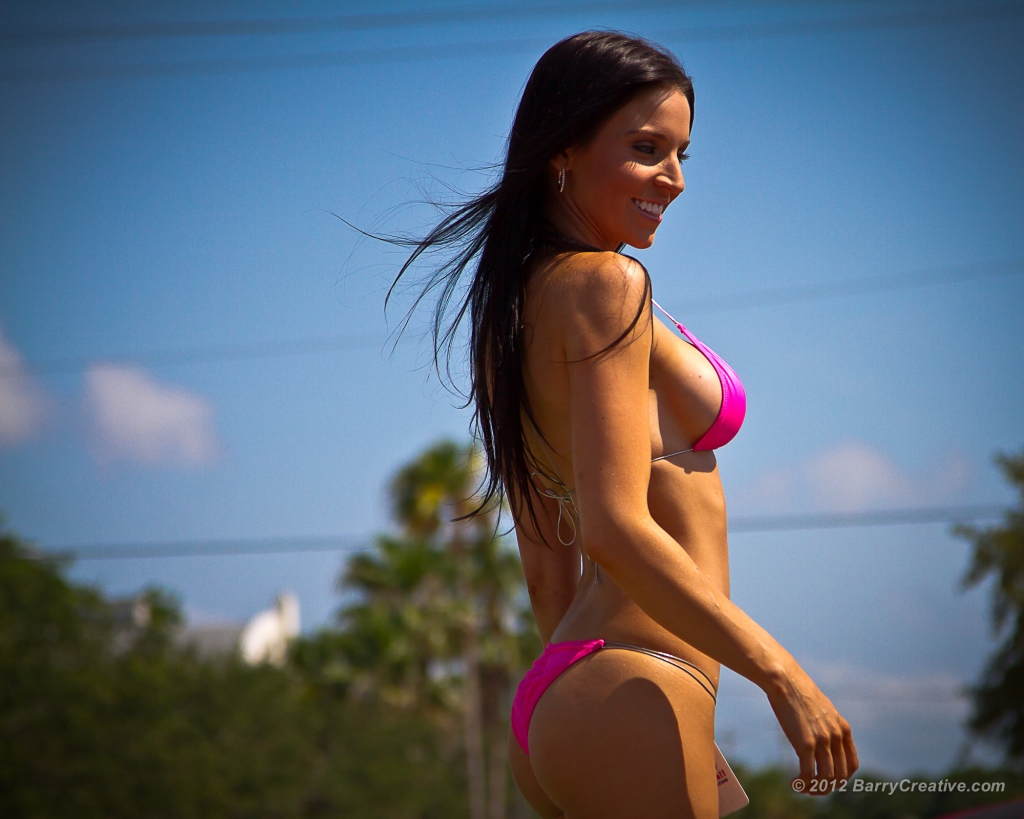 Maybe my thinking is all wrong. I wonder if I had never been advertised to or taught that this was beautiful, I wonder if I’d instinctively be drawn to it. You know, like if we belonged to a tribe where everyone showed their asses to us everyday, would asses be such a big deal or as non-erotic as toes or the backs of knees.

I suppose if I shot this shit for a living, I would become all desensitized and just look for the shots, the shadows, the highlights and the images necessary to sell magazines, catalogs and underwear. Then I started wondering about some of these girls. Those that worked so hard to actually look this way. The ones that starve themselves to get thin, the ones that work out endlessly in the gym to get their body ripped, the ones that are obsessed with skin, hair, teeth, and the demon cellulite.

I had my fill of eye candy and gorged myself on tiny asses and firm breasts. It was time to head home and take the dog out for a walk. I said goodbye to my dear friends of long ago and began the long sweaty walk back to the car.

Some days are so confounding. They start out as shots of impotent palm trees and end up as triumphantly erect bikini pageants. This is scary to me.

On the way back, some kind of confetti flower twinkled at me from the bushes. It wasn’t wearing a bikini, nor did it have an ass that I could see. It just looked pretty to me so I shot it.