You know how it is. Couples. Friday nights. Saturday morning. Too much alcohol at the end of the week. Too much coffee early on a Saturday.

Page was relentless. The herding dog in her somehow convinced me to take her to the dog beach for some playtime. Like the good companion with opposable  thumbs, I prepared for our trip. Got towels, paper bowls, leashes, chairs, camera, sunglasses, water and off we went.

We got to the park and it was like some kind of comedy skit… me weighed down with everything over my shoulder and her pulling me through gates, getting everything caught on stuff, dropping stuff, picking up stuff, dropping more stuff, grabbing the poop bags, opening gates, closing gates. We finally made it out to the beach. I set up our camp while Page ran free and made friends. I brought an extra towel for her to lay next to me while I sat in the chair and shot the dogs in the water.

As we entered the beach… (and exited) … these two huge black standard poodles, were just sitting in the shade of a huge umbrella. There was no sign of their people anywhere around.

I started to snap away. The sun was still fairly low behind me in the east, as I looked out on the gulf. A girl and her dog swam across. She snorkels while he paddled, both had erect uprights in the air. 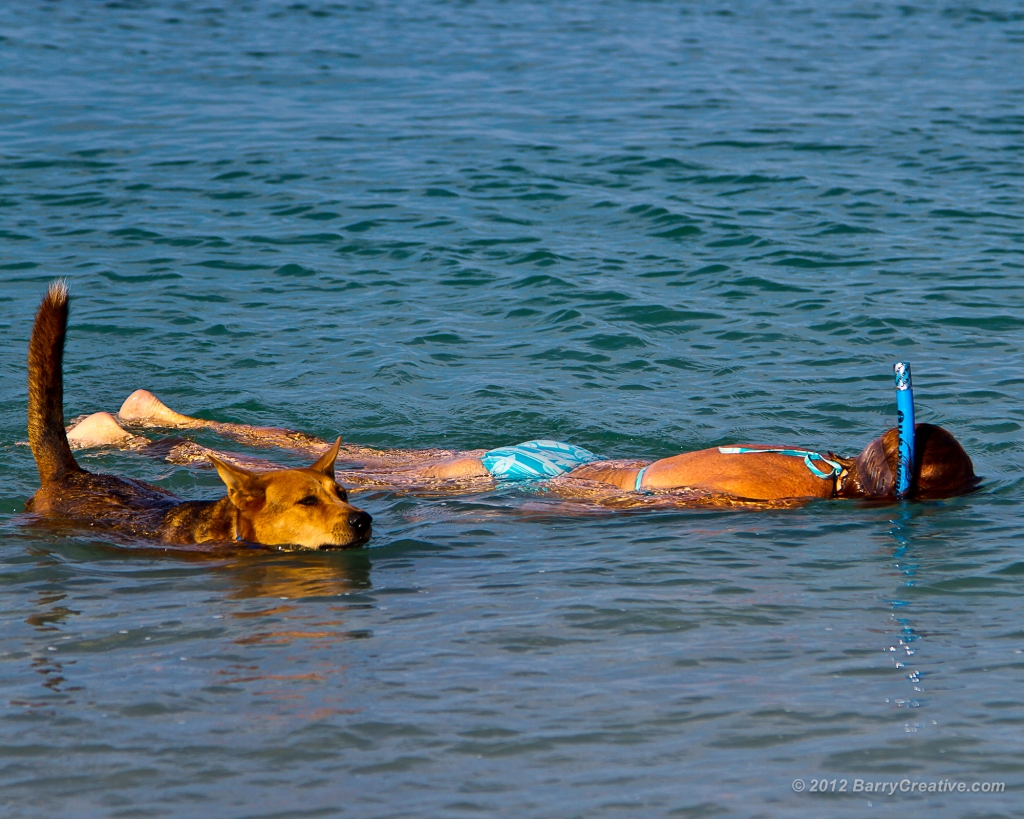 Just then, another dog swam across from the other direction. Another big shiny poodle it turned out to be. I could see her wet snout from way off in the distance.

I don’t know where the girl went but her dog came out of the water by himself and gave me a serious look. Such intense eyes turned my way, almost as if he knew I captured his image without permission. 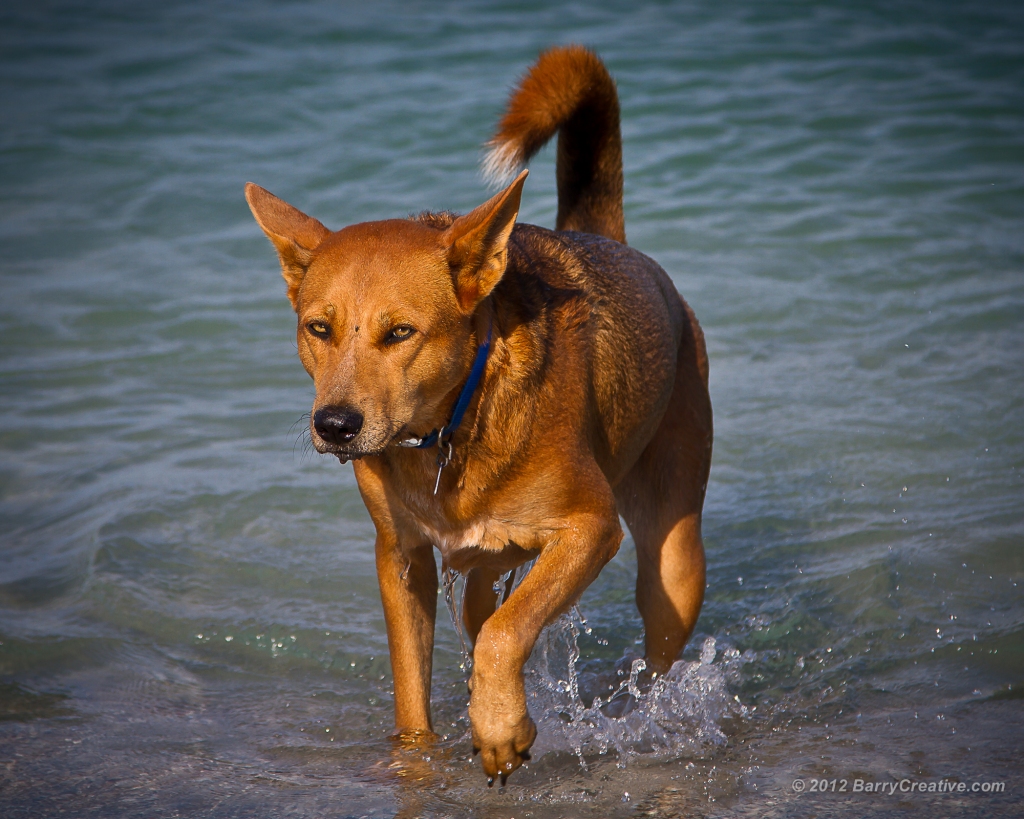 That’s when he decided to shake while I had the camera on him and his serious face turned to exceptionally silly. I had seen these shots somewhere on the internet but never thought about actually capturing one. I’m guessing, this is how that guy discovered his thing. His thing of shooting dogs shaking off when they’re wet and the funny faces they make. That’s his thing. I wonder what mine is? Mean time, I started to wonder where Page was.

I moved my eye away from behind the camera and there she was right in front of me. Apparently, she had decided to be with those people over there. I got the feeling she wasn’t even looking at me. Like she was ignoring me because she found someone else she liked better. Someone younger, someone thinner, someone who was a couple. I started to feel jealous! I started to believe she was trying to make me feel jealous. She’d rather be with them. She’d rather go home with them I know it! 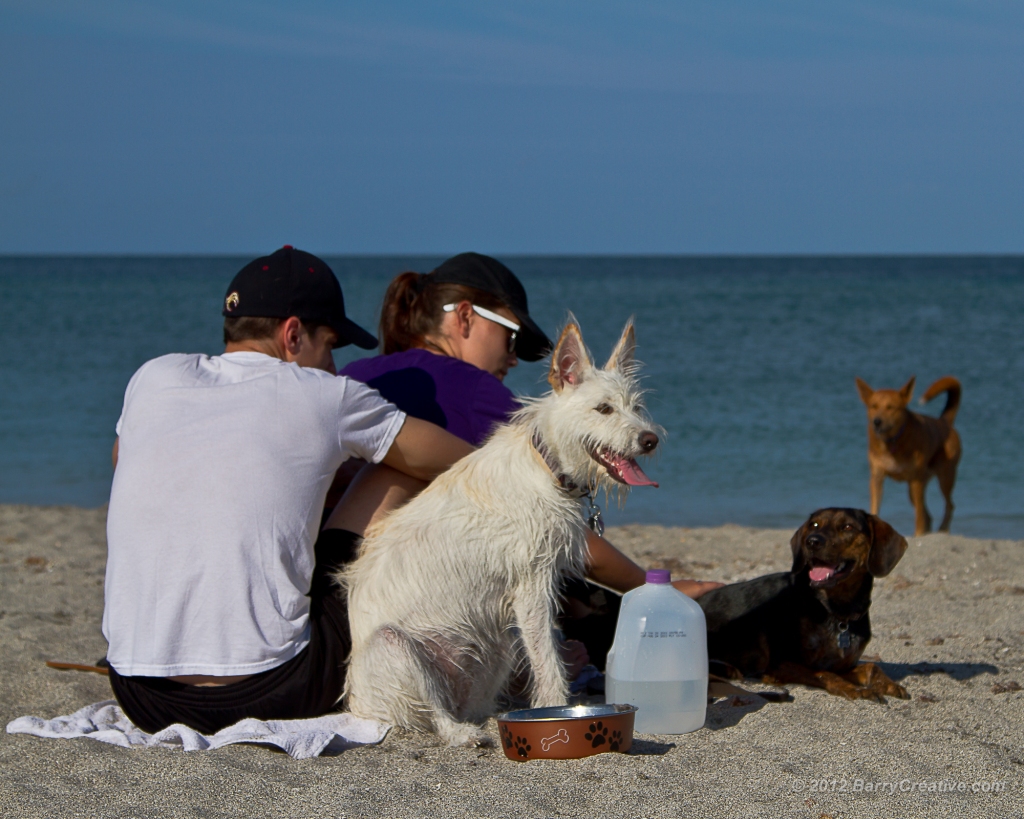 I too had a jug of water but they had a better dog dish. They didn’t have a special towel laid out special for her. She’d rather squeeze onto the corner of the one towel shared by two people and another dog, then to be with me. I felt so betrayed! After all I do for her. After all I did for her that morning.

She just had to flirt with those people. Rub her ass all over them. Laugh at their jokes while I sat alone ten feet away from her. I bet everyone on that beach was saying, “look at that poor guy and how his dog is just throwing herself at anyone that will look at her…”

That’s when she turned toward me and gave me that look. You know that look. That look of “if the food’s not good at home, I’m going elsewhere to eat!” My heart started beating faster. Just you wait young lady. Just you wait till we get home. Embarrassing me like that. I thought you were mine and you think I don’t see you over there, teasing me. You’re trying to make me feel this way aren’t you. Don’t you stick your tongue out at me!

That’s when the guy touched her in that special place that I thought was just reserved for me. What a bitch! She’ll just flirt with anyone won’t she. She’s trying to make me jealous… I just know it! 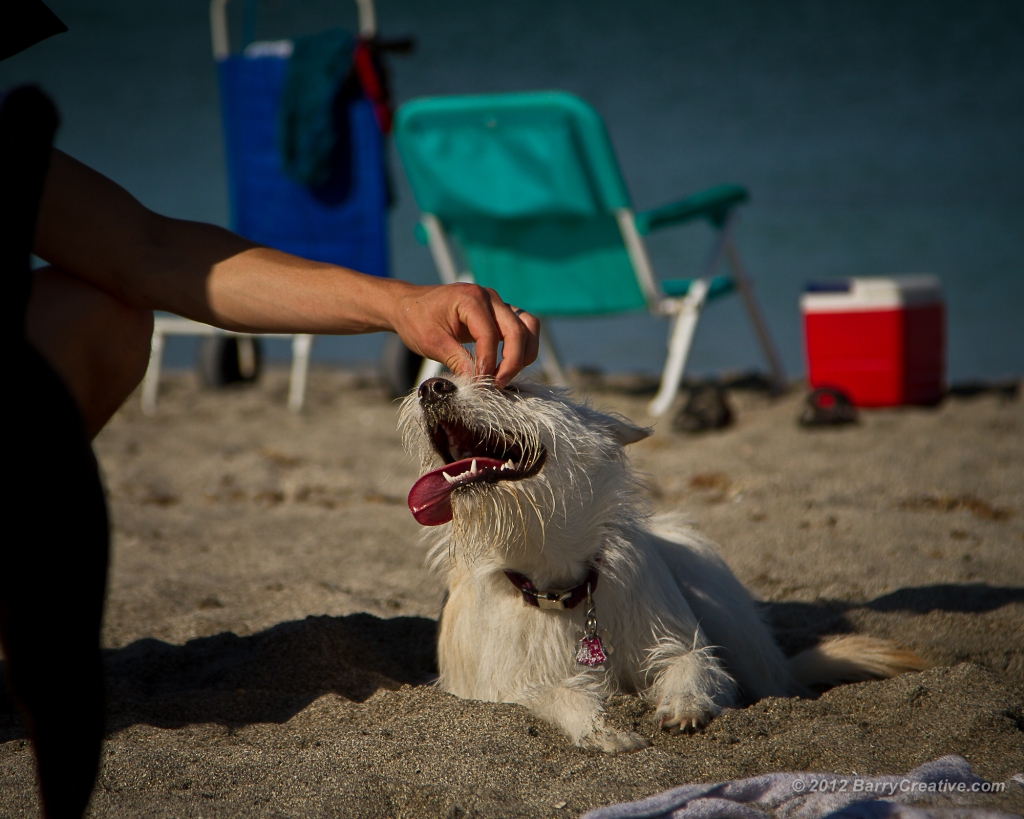 I realized that I was having an unprovoked Saturday morning spat with myself. I figured I’d better change the venue and recover what was left of my beach burned brains… and we packed up and headed home.

I dropped Page off and decided to go to a local Flea Market. Of all the interesting things I could have photographed, the first thing that caught my eye was a box of twisted hooks that one would screw into the ground to hold down a tent.

As I walked around, a cute little girl asked me to snap one of her sister and brother. It was so odd to get the request as if she knew it was more for my pleasure of taking the shot, than for her desire to acquire it.

Deep into the bowels of the flea market was a booth touting instant beauty. Just 20 minutes and you too could look like the model in the picture. I guess some people feel that no matter what they look like, if they have whiter teeth, all will be brighter with the world. 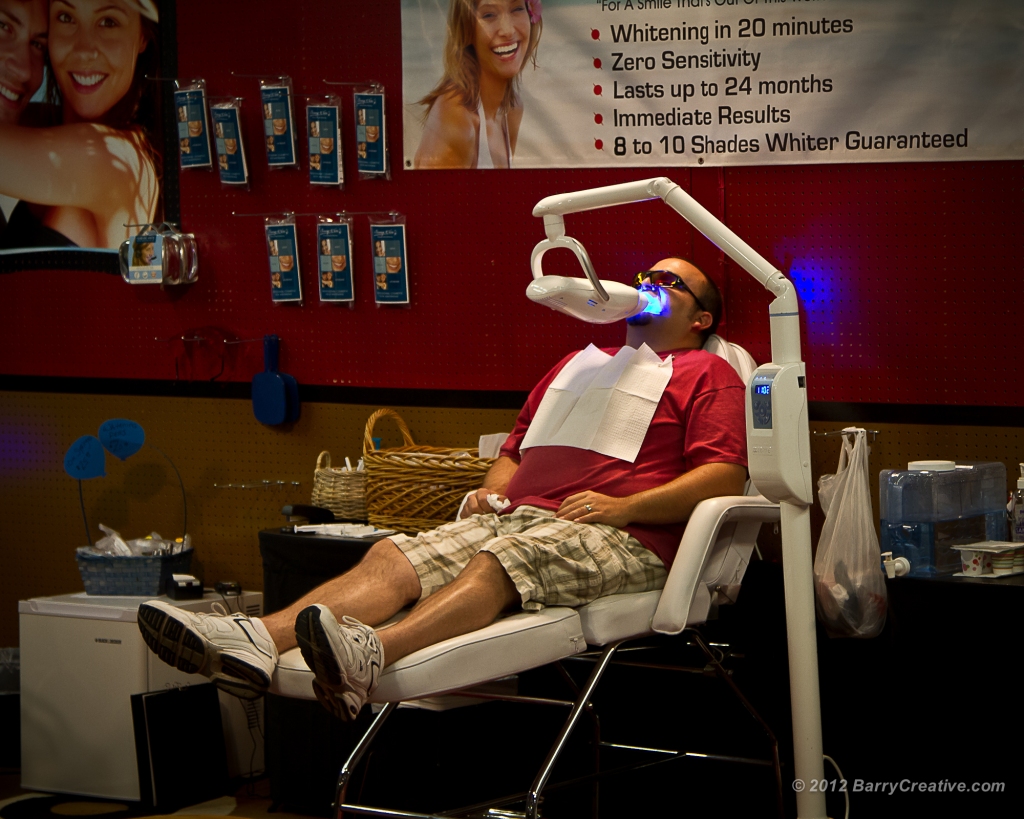 I loved the fact that their eyes were closed and they couldn’t see me snap them. Not to mention how weird the blue light played with the camera. 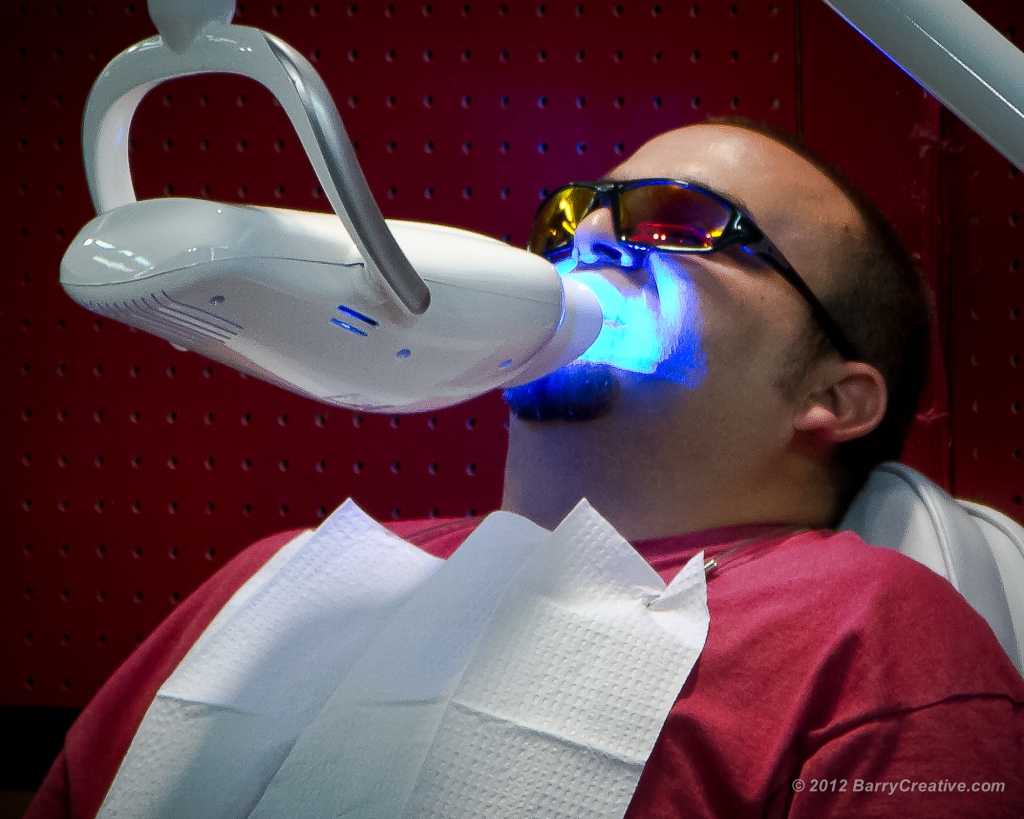 Sometimes it’s not what’s beautiful that is worth capturing. Sometimes it’s just how different something looks than how we see it … or how it actually is.

Further down the row of depressing booths was a woman selling puppies. Too sad to write about… so I just kept going.

As I left the Flea Market, a little boy jumped in front of me and tried to kill me with his bubble gun.

I needed to create some beauty to feast my eyes on. I left the gross Flea Market and headed out to Anna Maria Island. There was a lot of traffic up ahead as the cars crossed over the bridge. When I saw what everyone was staring at, I had to pull over and get me some.

I think it was like some sort of double jeopardy. Strutting horses next to striding dames. Both magnificent to look at.

Just then, a spectacular beauty galloped by and I caught the horse in mid-flight.

The girls started posing for me like nymphs or sirens luring me into their trap of mythological beauty.

And with one look, an ordinary man is gifted with an extraordinary smile.

All this beauty made me hungry and I was a block away from one of my favorite fish joints. You know the ones where they catch the fish, pull it right out of the water and then clean it and serve it. You mean you don’t have one of those by you? As I waited to be served my ultra fresh blackened grouper, I grabbed a few with my new friend the Egret. 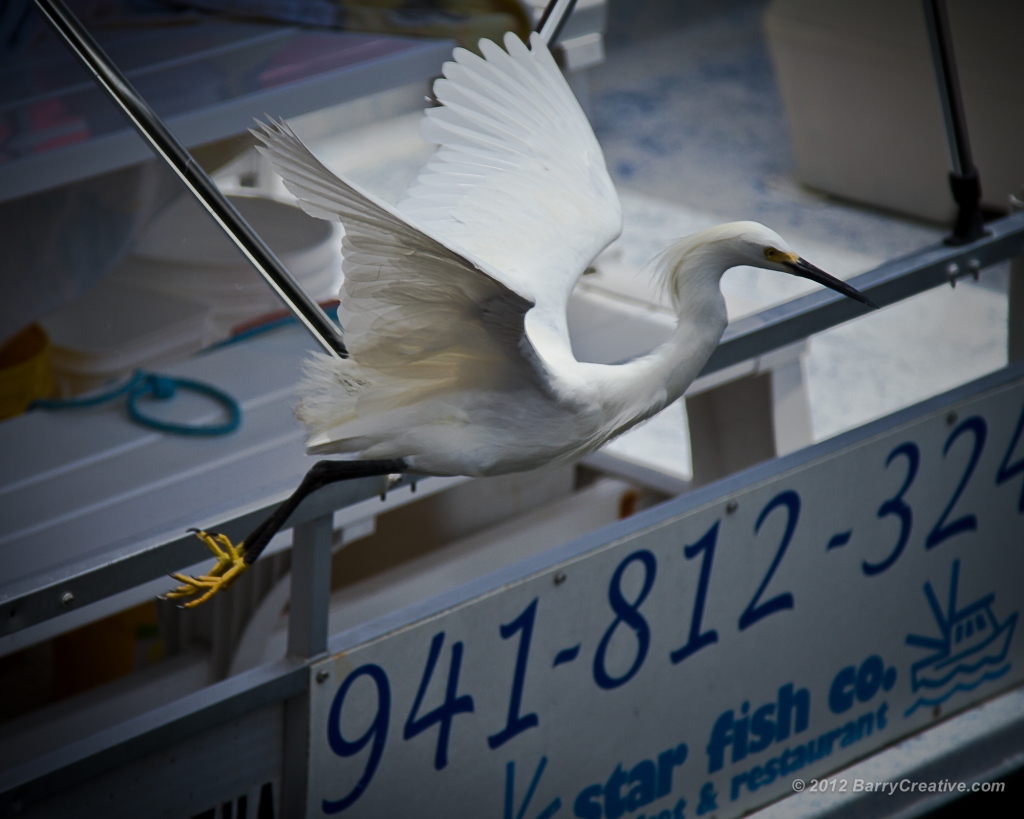 Thank you very much for lifting your leg and adding one more white splotch to the already painted poop deck.

As I left the fish place, I caught one more of her resting on a post.

Later that day, in a completely different kind of restaurant, I met a man at the bar while I waited, to pick up my to-go order. He commented on my camera and I learned that he was a photographer and he was kind enough to give me some tips on how to shoot better photos. I was so excited with new knowledge that I ran out and grabbed the first thing I could find, which was this knotted root.

Then I rushed to the beach to grab another sunset. One can never have enough sunsets me thinks.

That’s when the secret of life was revealed to me on the beach after the sun went down. Back on the beach, where I started earlier in the day, but with a much different outcome.

Earlier, I was twisted in my own delusion of betrayal by my canine. But here… now … it all makes sense.

Our most natural state is to stamp our feet up and down in the puddle while the world watches us in our diapers. 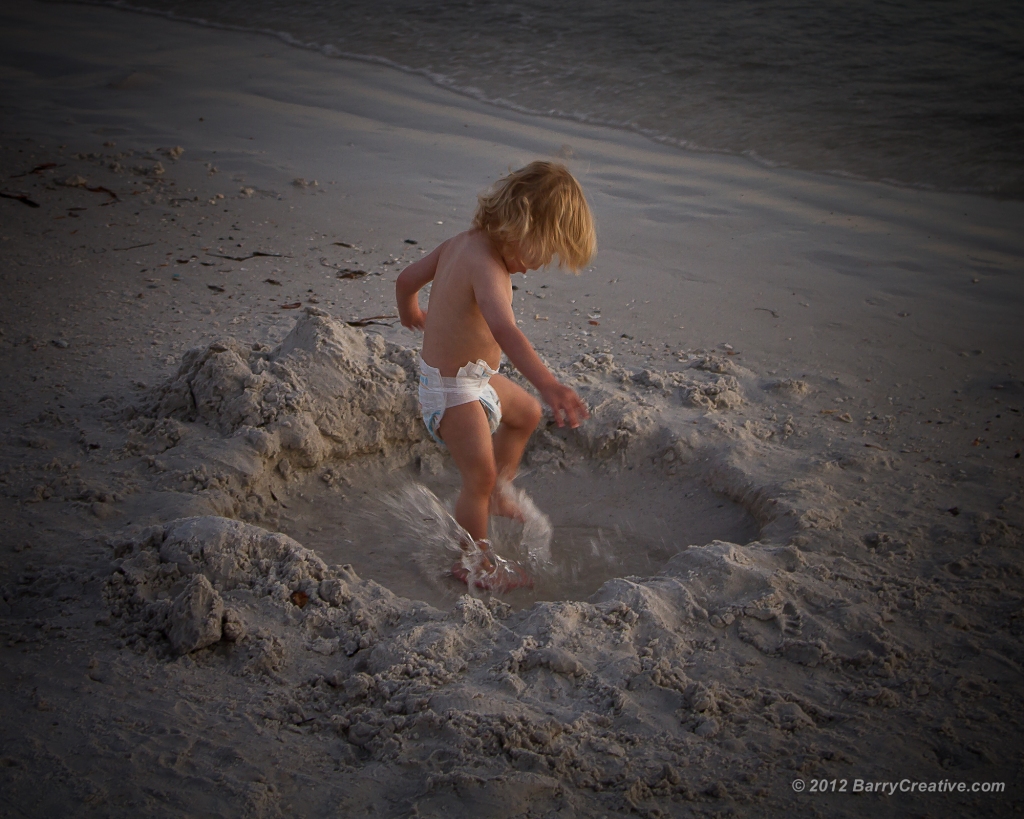