Me and Page the dog, went for a quick walk, as I had planned to “walk the bridge” between mainland Sarasota and Bird Key. On our quick walk before she would be crated for a few hours, we walked past the back lanai of an apartment facing the green grass. The couple living there has three dogs. He works endlessly to massage and paint his old Firebird. She mysteriously arrives and disappears each day. Both they and their three dogs get very noisy when Page and I walk by. First the dogs bark and then the couple yells, “Hey, hey, hey!” I know that the couple is yelling to quiet the dogs when we walk past, but yesterday I heard it all at the same time. They all barked and yelled as we walked by. All of them equal, all of them simultaneous, all of them loud as we passed and quiet when we were gone. I chuckled to myself as my view once again got distorted to not hear their yelling in response to the barking, but just a bunch of animals on the lanai making noise at the same time, just because Page and I were there.

If Page ever did bark, I think I would tell her to quiet down in a whisper, rather than add to the barking volume.

I share this little anecdote as my ordinary walk across the bridge, took several similar twists of perspective. 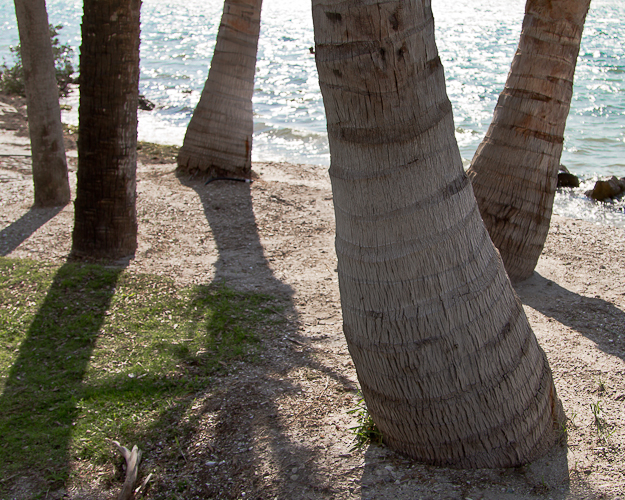 I arrived at the bridge at a parking lot where the bridge walkers depart from and saw these tree trunks by the water. It seems I’ve developed a new gear in my heart. It feels a picture’s attraction, very distant from what my mind’s words can describe, analyze and rationally critique. It’s happening more and more to me. I feel an attraction to a view of something for no particular reason. I’m taking more and more of these irrational photos just because I’m drawn to them.

The folks around here call it walking the bridge. A long steep arc that connects too pieces of land. The bay coughed its hot breath as I crossed the bridge. A powerful gust of warm wind masked the intense shine, as the sun was just thinking about setting.

Long views of converging lines destined for their vanishing point ahead. I trotted in 93 degrees with a heavy black camera. The sweaty walking me disappeared as the images performed, each shouting, “look at me, look at me!”

This bird passes overhead and I shot her. I remember the stripes of her wings and wondered if she was an osprey or a hawk. I didn’t remember that she was shitting. Then I thought to myself, “there’s something you don’t see everyday.” It ends up on your windshield or on your shoulder if you’re lucky. What a mighty string of bird shit she produced, as she flew. “How odd…” I thought. 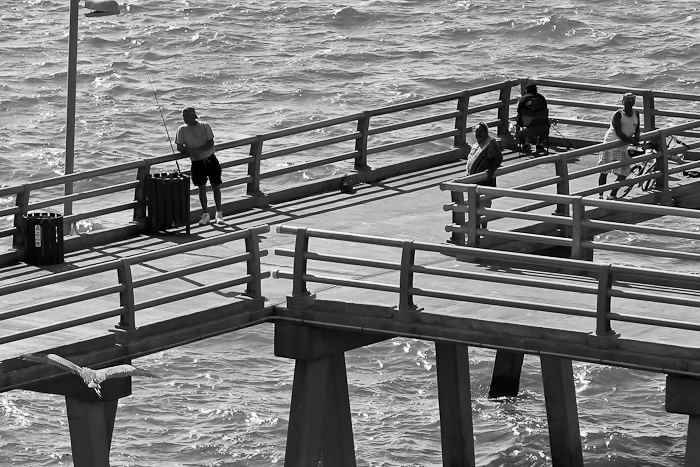 Another common arrangement they have around here are bridges looking down on other bridges. I grabbed this view, because of that weird gut feeling again. Something about the zig-zag lines and all the people and birds posing I suspect.

Suddenly a sea-gull jumped on the head of a Pelican. “Look at me, look at me!” she yelled.

I saw this as the equivalent of the three monkeys. You know the one, “see no evil, hear no evil, speak no evil.” I call this “bird standing, bird floating and bird flying.” 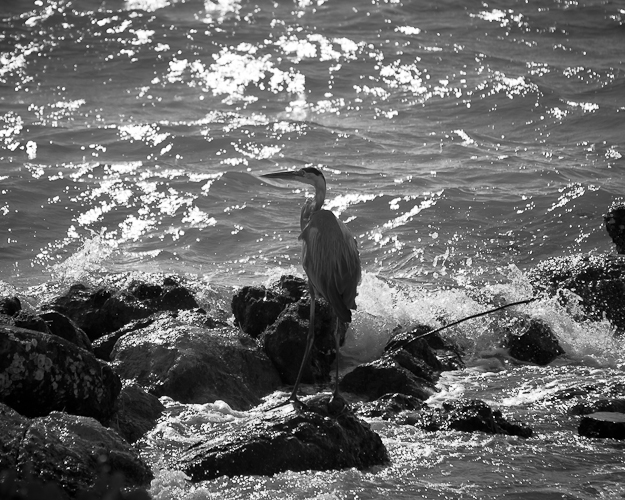 Then I grabbed this one. At first I thought it was just another dumb bird picture. But something about the crashing waves and the sparkling white water said something different to me.

Again, the violation of the scene with disappearing curved perspectives slashed with violent inclines. Just something unknown yummy wanting me to catch it.

Just then, another bird flew overhead. At first I thought, “Jesus, not another dumb bird.” But then, when I looked closer, I saw the prehistoric bone structure of her wings. Bone and feathers and somehow these birds are born knowing how to fly. What are we born knowing? 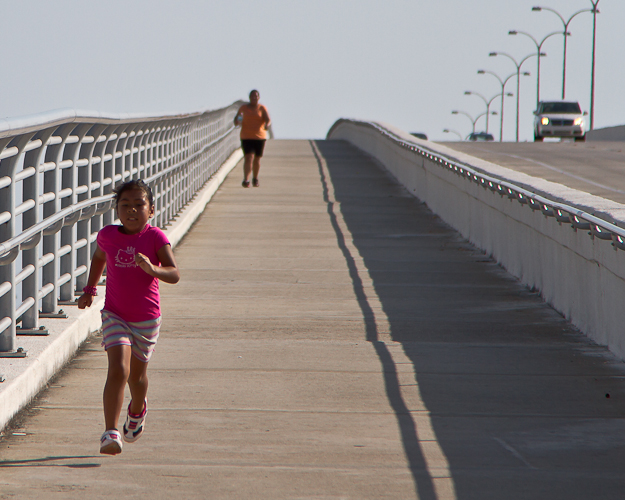 It was time to head back to the car. I had crossed the bridge and returned on the other side. I popped up on the other side of the bridge just in time to catch a child running away from her mother. I did nothing but shoot her. Was she a stolen or missing child? Was she just pissed at her mom? Maybe all was well and she just felt like running. Maybe someday, this young girl will be an Olympic athlete. Or maybe life will deal her too many unfair cards and depression will fuel her appetite and she will grow to be an obese woman, barely able to walk much less run. 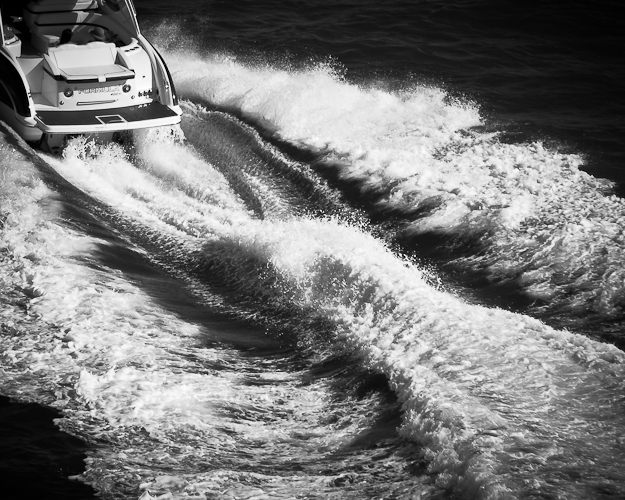 Just then, a motor boat passed underneath the bridge. At first I caught the boat, but then I decided I liked the frosty wave of its wake much better. Have you ever thought about that? Forgetting the boat and focusing on the wave? It not being us who cause something to happen but putting the emphasis on all the events that happen after we leave? What we leave in our wake impacts people, places and things that aggregate to other people’s wakes. We frost each other all the time, with white puffy foam that disrupts, tips over all that floats around us, and with time, it all settles and turns back into calm water.

Naturally as I got to the bottom of the bridge, another tree called out to me. Or it did “knot” call to me. What the hell was that cocoanut looking crisscrossed weave doing in the middle of the palm tree trunk? My chest ached to take the shot.

Then I got in the car and drove home. While on one of the major roads heading north, I was stopped at a red light. My camera was on the passenger seat. As I waited for the light to turn green, this unfortunate woman popped into my view. I grabbed the camera and shot a few through the windshield, as the light turned green and I drove away. “Was she sneezing? Did she have an itch? That’s certainly a nice dress she has on. Why doesn’t she put her sun glasses on her face? I never noticed that tire store before.” 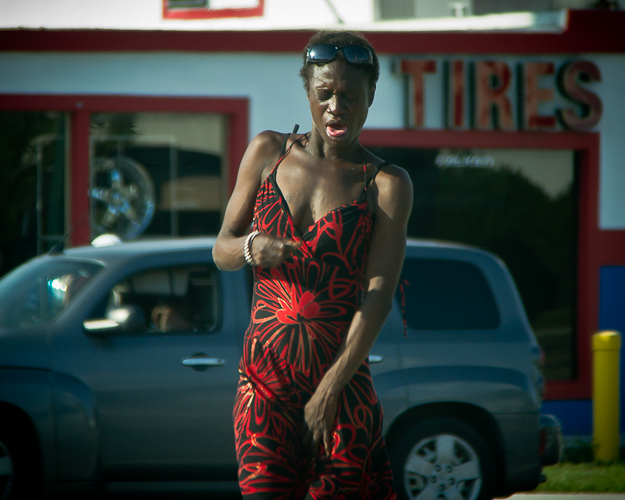 I wonder how other people think. Do they just see what they see? Or do they ever consider the possibility that what they look at or what they hear is something different from what they think it is?

9 thoughts on “CROSSING OVER”