In Sarasota, there is an extraordinary homeless population. Who needs shelter when it’s sunny and 75 all the time? I like to wander. I like to cast off possessions and know that who I am is not what I own, where I live or what I do. As I hunt for images unexpected, to provoke stories untold, curious things happen.

I walked past this guy above and thought him to be just another street guy, with no intention of shooting him. A woman walking on the street in my vicinity,  saw me looking at him as I walked past without taking a picture. She whispered to me, so as to not wake him, “get him from the other side and be sure to get his cigarette.”

It’s so validating about the not invisible barrier that separates us. She was a complete stranger in the same place I was, who chose to enter my wander. So on her push, I went back to the guy and shot him as he slept. I was sure to get a good shot of his luxurious nap and the symbol of a smoke-filled private moment with himself. The wealthiest man in the world, needing nothing, sprawled out on the sidewalk, napping, smoking, modeling.

I’m sure if he shared, he would have an extraordinary story to tell. How did he get here? Where was he from? What brought him to the sidewalk; that particular sidewalk and that specific storefront? Maybe someday, I will wake these guys and interview them in exchange for a few bucks and a permission granted photo shoot.

I hopped back in the car and went from impoverished street person to the yachts docked at the marina. Boat after boat. Ship after ship. Also countless stories to hear about how success and wealth was found. The story behind why each vessel is named what she is.

Despite the affluence at this destination, inventive trash receptacles and mindless ashtrays can be made out of virtually anything. Cigarettes held in palms one moment, are dashed out in the trunk of a perfectly available palm tree. 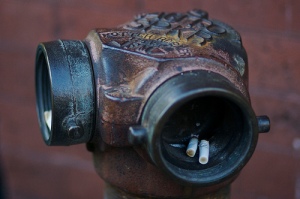 Most people don’t know what they are and are not motivated to research them and find the answer. They’re called Auto Sprinkler Connections and they exist to augment the sprinkler system in an office building by providing the fire department a place for them to hook up their hose. Oddly, they have come to be treated like decorative elements in the front of buildings, much like jewelry that adorns. Naturally, they have become targets of theft as warped inventive master minds plan the removal of the caps to sell as scrap. Unless I’m misunderstanding my research, these pipes are dry till a number of temperature sensitive sprinklers go off in a building that will also send water to these pipes for the firefighters.

On newer buildings that have not yet been vandalized, when the sun hits them just right, they become sparkly attractions for my photo capture, for no reason in particular.

That’s it for today. No big philosophical message, just draining the camera of stray shots grabbed last Sunday in order to make room for more nonsense this Saturday or Sunday. I wonder where I’ll be and what I’ll find this Memorial Day Weekend.

One thought on “ASHES TO ASHES”