So I walk into this camera store, feeling like I looked like this Pelican. I had just gotten my hair cut short, and with my Harry Potter glasses, my eyes round and probably too close, all that was left was my nose, that I just learned from watching that movie, “The Happening” with Mark Wahlberg, that my nose apparently grows a little each year.

So in I walk, into this store, willing to be the dumbest guy on the planet… but I just learn better when someone tells me, points it out to me or shows me. I had been reading the books and playing with the camera since I got it, but was sure I was missing most of the magic it had to offer.

I was on my way, to check out this beach, where you supposedly could let your dogs run free, when I passed the store. So I parked, walked in and asked him, “I don’t mean to sound too dumb, but I heard some things, read some things, learned as much as I could, got this camera and this here lens, but I know I’m not using it right. Can you show me a few things?” The humble sage took my camera, spun it around, “…why this lens?” he said. I had heard that it was a magic lens so I got it. “… what others you got?” he asked. Then I pulled out this humble little 85mm f/1.8, that I knew even less about then I did the camera. That’s when he said, “…ahhh…that’s a sweet set up. This is a nicer lens than the other, but the other is a better lens then this.” It reminded me of the guy who worked at the pizza place where I grew up. He’d ask if I wanted a Coke with my slice, then, he’d ask what size I wanted, “Large or Big.” Anyway, back to the big Burl Ives looking camera guy… he swapped out my lens, made a slight aperture adjustment, and handed it back to me. He said, “now you’re good to go.”

I looked up at him sorta stunned. He continued, “…ya know, you should learn how to work that thing. It’s like you have a Ferrari in your driveway but you don’t know how to drive it.”

I got back in the car and continued on my way to the mythical dog beach where they run free, sun themselves and dig, pee and poop in the sand, to their hearts content. I thought a lot about what this guy said. Wondered exactly how many Ferrari’s I had in my driveway that I didn’t know how to drive. I wondered if, I myself was a Ferrari but didn’t even know it! I must identify my Ferrari’s and learn how to drive them.

Anyway, I continued on my journey to the beach when I passed this other store I had wanted to stop by at. Supposedly, they had the best organic dog food that was not available at any other stores. I had tried to look for this store unsuccessfully in the past, but in pursuit of another destination, this store popped out of nowhere. Note to self, when you’re looking for one thing you won’t find it, but when you’re looking for another thing, you’ll probably stumble upon the place you couldn’t find the last time you were looking for it. 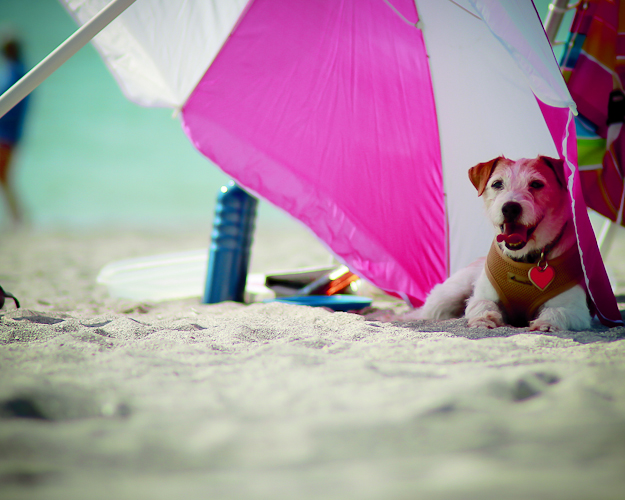 Anyway, have you ever noticed how many tattooed biker looking chicks, run these little pet stores? I sure have. It’s a weird thing, not bad, just a strange phenomena, like Jews running Delicatessens, the Irish in Pubs, and tattoo bikers selling the cutest stuffed animals for dogs… and of course the best dog food. She had tattoos of flowers and vines running up and down both arms. Her cheekbones were high and long and her eyes were soft, warm and dark, with perfectly ratty shoulder length dark hair. She sold me the most expensive dog food I’ve ever bought. Something about buying better organic food with less fillers and switching up the different flavors so my dog won’t get bored. “How would I know if my dog got bored with his food?” I asked. Again, the dumbest guy on the planet, as I looked at her similar to the way I looked at the camera guy. She explained, “If your dog stops eating the food and just looks up at you with that look that says, “Chicken again?”… that’s how you know she’s bored with what you’re feeding her.” She also told me about allergies they could develop from eating the same thing over and over. Then she sold me a very expensive deer antler for my dog to chew on and out the door I went. 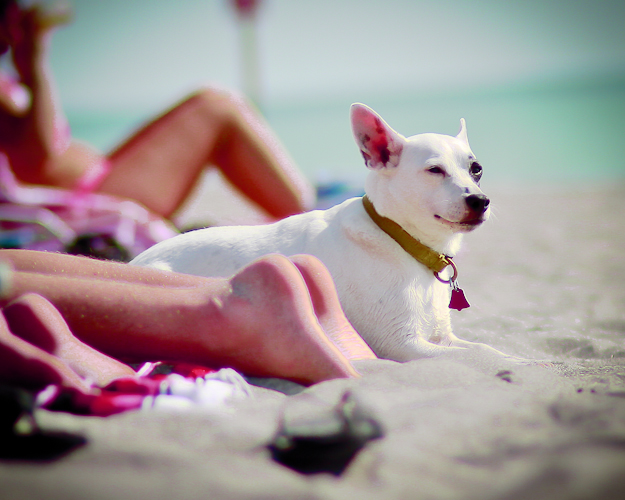 I don’t know what it is about tattooed biker chicks, but I gotta admit, I love them. I always seem to crush on them, hairdressers and waitresses. Anyway, I continued on my way to find this place. An awkward drive down a big road here, a veer off to the right there, a right turn at this other light and a left turn two blocks down, and follow that till the end. No one could explain to me how to get there, I had to Google Map it. And then I found it…Valhalla.

It was like a dog park and beach combined. You and your dog, park, walk through this fenced in area, down a path and then all the way to the end of this driftwood boardwalk, to the beach. There they all were, dog people with their dogs. You could tell that these were a different kind of people and a different kind of dog. They came prepared with their chairs, umbrellas, toys, food, water and surf boards to swim in the gulf with their furry friends. 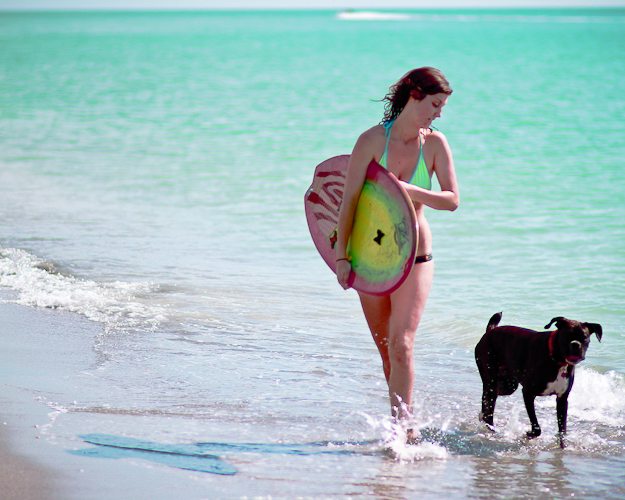 Some dogs played with their people, others played with each other. Some dug holes in the sand to lay in, others rested in the shade cast by their large owners resting in low sand level lounge chairs. Bright colored floating toys were everywhere and so was the kind of laid back attitude that comes with owning a dog. One lady I overheard, just stepped in a pile of dog crap, and casually walked into the water to wash it off, as if it happens to her every day. I wondered if she has a Ferrari in her driveway and doesn’t know how to use it either.

Do you have a Ferrari in your driveway? For me I think my Ferrari, is just shooting pictures and writing words. It was a strange day yesterday as I got that tip from the camera master, the food advice from the biker chick and also, later that day, got an email back from a producer/reviewer that had read my movie script and had some helpful comments. Strange how I sought the help at different times but got the information I needed to make things better all on the same day.

And of course, on the way home, listening to the radio, I heard about that NPR writing contest. And I thought, “600 words? Sheesh, I could do that in my sleep.” And now all I can think about is that damn contest assignment…the first line of the story must start out with, “She closed the book, placed it on the table, and finally, decided to walk through the door.”

Maybe she just finished reading a book on how to drive a Ferrari and that’s what’s on the other side of her door?

2 thoughts on “MY FERRARI”